Silicon Valley tie-up is a match made in retro-electro heaven. 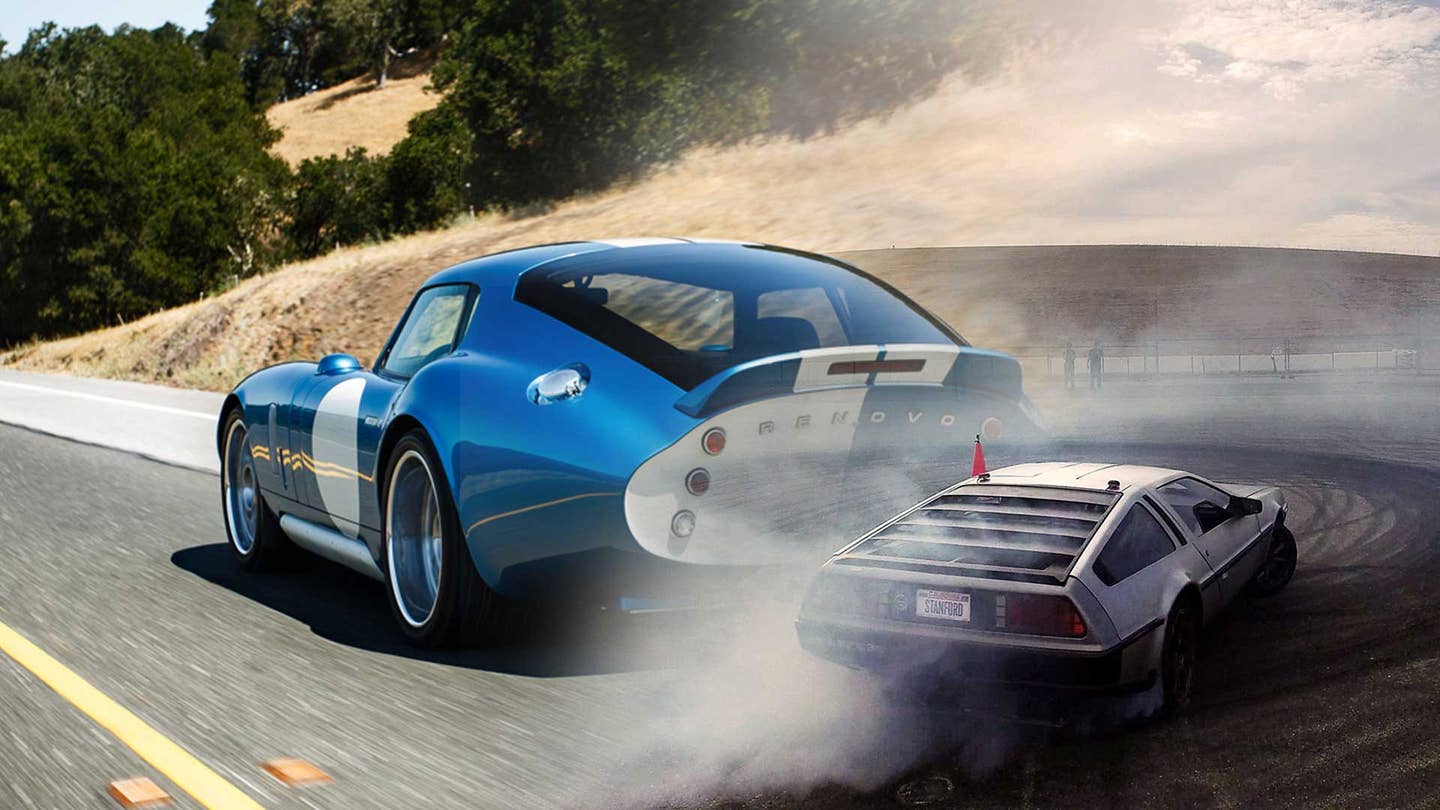 Silicon Valley doesn’t do retro. Dump a gaggle of technologists, venture capitalists and futurists of all stripes (and gingham plaids) into a place where the sun shines 300 days out of the year, and they tend not to look backward much.

Leave it to the vintage car geeks, however, to sniff each other out.

The Revs Progam at Stanford University, an incubator of car-futurethink, has been charging hard into autonomous-vehicle technologies. Its software has helped guide an Audi TTS up Pikes Peak and an Audi RS7 in a lurid, high-speed, self-directed drift. But its latest test bed is something decidedly throwback, and it took other throwback-minded Valley people to make it happen.

Renovo Motors, an EV startup that slackened jaws in 2014 with the debut of its Coupe—modeled on the bonkers-rare 1964 Shelby Daytona Coupe endurance race car—gave Revs access to its garage, its expertise and, most crucially, its monstrous electric drivetrain, for a donut-spinning autonomous DeLorean that the Stanfordites call (because of this, this and this) MARTY.

“The drivetrain came from the Renovo Coupe, and we modified it to suit a 1981 DMC-12 chassis,” says Jonathan Goh, a PhD candidate in the Revs Program’s Dynamic Design Lab. “It was a lot easier to work on it over there, rather than having to transport parts to and from.”

MARTY’s drivetrain components are “controlled through one API,” Goh notes, sounding like one of the Valley’s legion web developers. The processing power housed within MARTY is suitably massive, allowing pinpoint placement of the car’s wheels. “We can be quite precise,” Goh says.

Back to the Future Day provided a convenient platform to draw attention to the lab’s labors. “But the car wasn’t designed with the date in mind,” says Christian Gerdes, professor of mechanical engineering and leader of the lab. “What we’re aiming for is to re-create those inputs, those subtle human cues, that you think about in a drift competition,” he says.

The donut crafted by MARTY is pantheon material: a near-perfect sphere of burned rubber, sealed with a fist-bump by the car’s onboard carbon lifeforms—who never touch the wheel. It puts a viewer in mind of the Internet-breaking Gymkhana videos helmed by Ken Block and the no-goodniks at Hoonigan. Is there an obstacle course in MARTY’s future?

Putsch Racing’s DeLorean Is almost as Cool as Doc’s