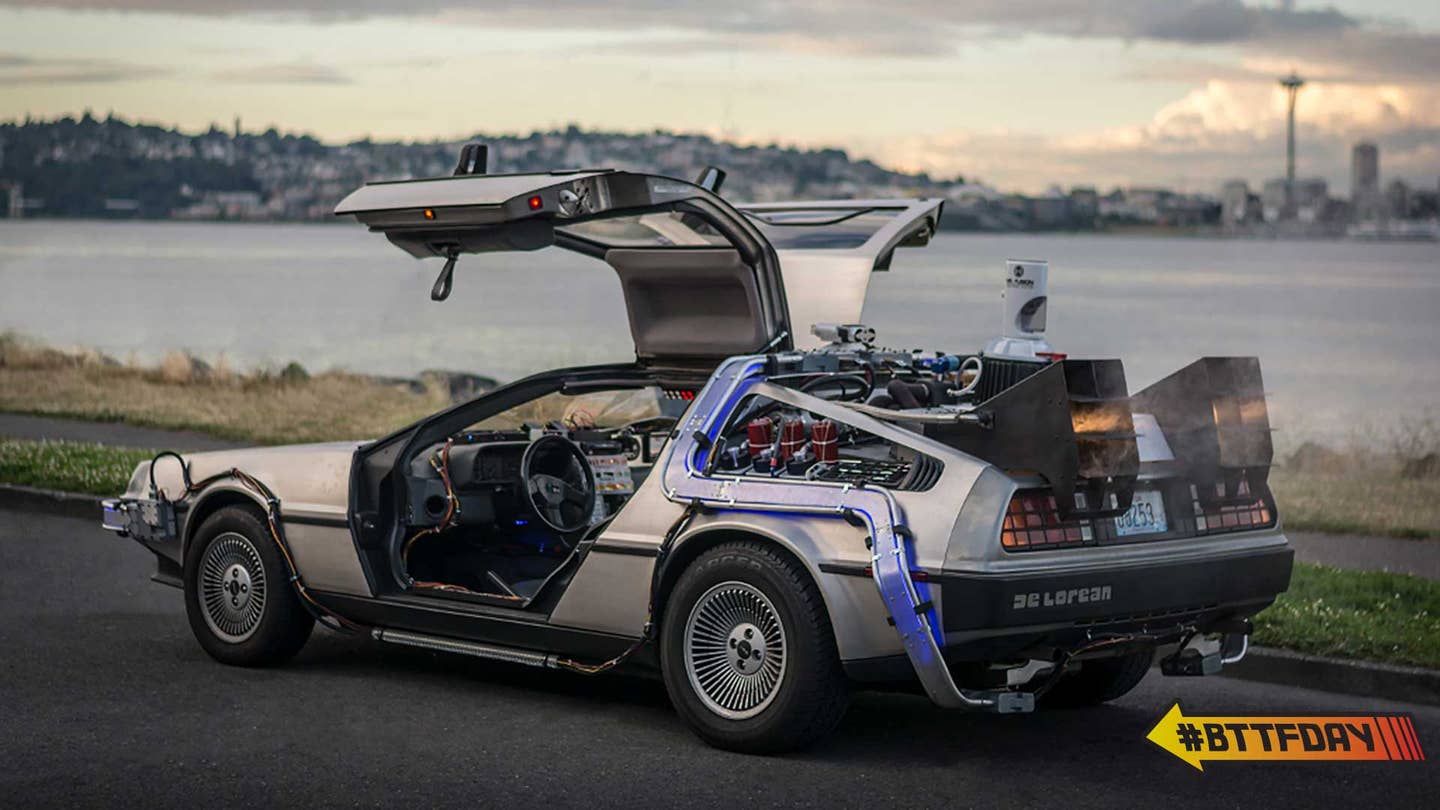 “If my calculations are correct, when this baby hits 88 miles per hour, you’re gonna see some serious shit.”

So said Doc Emmett Brown in 1985’s Back to the Future—and was he right. Doc had built a time machine out of a DeLorean, which, at the time, was the most famous gullwinged door car in the world (that before “falcon wings” were invented). Back to the Future affixed a Flux Capacitor to the car, added a crackling screenplay, and hauled in nearly $200 million in its first six months. Careers were made, but in the end the most memorable character was the DeLorean time machine, still a pop culture sensation.

You already know that today is Back to the Future Day—October 21, 2015, the date McFly and Doc plug into the time machine computer at the end of Back to the Future, and the future depicted in Back to the Future II. The screenwriters got almost everything wrong (except for the fact that the Chicago Cubs may win the World Series, bizarrely). But who cares? It’s all about that shiny DeLorean.

To celebrate, we tracked down the unheralded cast of characters who have burned many, many gigawatts of energy building screen-correct replicas of movie and TV cars from the pre-Fast/Furious age of screen machines. A Starsky & Hutch mobile. A celebrity musician with his take on the Dukes of Hazzard General Lee. A hopped-up Bullitt Mustang. But it all starts with Doc Brown’s DeLorean.

Dave Kane and the DeLorean

For Dave Kane of Seattle, it started as a kid back in 1989, when he saw Back to the Future II. He’s been obsessed with the movie—and the DeLorean—ever since. A couple years ago, Kane bought a stock DeLorean and had an LA company modify it into a time machine that’s “very close to 100% screen accurate,” he says. It’s got sound effects, a fog machine that shoots fog out of the back, plus props galore, including a flux capacitor and a real 1984 JVC camcorder like the one McFly uses in the first film. And, the car’s street legal.

“I was at Comic-Con and someone had a 1960s Adam West-era Batmobile,” Kane says. “It had a sign over it saying, ‘The World’s Most Recognizable Car.’ I don’t know about that. Compared to the Ghostbusters Ecto-1, KITT from Knight Rider, and all these other movie/TV cars, the DeLorean time machine still takes the cake as the most recognized car, across all walks of life.”

Kane rents out his time machine for private parties, parades, the works. If you’re throwing an ‘80s bash this week, however, you’ll have better luck booking Madonna. With Back to the Future Day here, the car’s schedule is full.

The Machinery of Mad Max

Few movies have earned the devotion of hardcore gearheads as the first two Mad Max epics: Mad Max (1979) and The Road Warrior (1982). Case in point: the Mad Max exactingly screen-correct replica machines photographed at Wasteland Weekend in 2014. The two black cars are Interceptors, Max’s post-apocalyptic police car (itself a highly-modified 1973 Ford Falcon Coupe). The car in the center is a Red XA Bat, from The Road Warrior. Next to the car, in full-face leather, is Dee Vyper, its real-life owner.

“There’s millions of guys, in so many countries, who are totally into this car and this movie,” says Vyper of the Interceptor. So why is his car a Red XA Bat, an esoteric choice for a replica? Villain cars from movies are now coming into vogue among collectors, Vyper says. “Besides,” he says, “it just felt right.” And he should know. He’s a partner in Mad Max Cars, which imports Australian Ford Falcons (the automobile that the Interceptor was based on) and builds them out as movie cars.

If this Mad Max obsession has you scratching your head, take these words as advice, from Max himself: “Here I am trying to put sense to it, when I know there isn’t any.”

The buddy-cop show was a TV sensation from 1975-1979. Today, the car that appeared on that show—nicknamed “The Striped Tomato”—is more famous than either of the starring actors. Just ask Ron Hagenson, who owns a 1974 Ford Gran Torino—once again, screen correct make, model, and more, from the show’s first season.

“It’s a former rust bucket,” says Hagenson. “I acquired it through that wonderful technological device called Craigslist.” It took Hagenson 18 months to find a ’74 Gran Torino he could use, and about as much time to restore it and build it out as a movie car.

“I found a new, old stock 8-track player on eBay, so the car has a working 8-track,” says Hagenson. “In the show’s first season, for about two seconds, Starsky and Hutch are talking on the radio and they show a flash of the thing mounted under the dashboard. I searched and found an original Motorola police radio just like it, and mounted it there as well.”

Why Starsky & Hutch? A few years ago, Hagenson watched the show on Hulu. “I decided I liked the show way more than I did when I was a kid,” he said. “Then I decided: Wow! I really like that car.”

If you’re a certain age, and you have a Y chromosome, no doubt you grew up playing with a General Lee Matchbox car, from the TV show The Dukes of Hazzard (1979-1985). The ‘69 Dodge Charger car was hotter than Daisy Duke’s quarter panels. Pictured here is the Xtreme Lee—a screen correct original Charger built out as a modern interpretation by legendary guitarist/songwriter Kenny Wayne Shepherd.

The bluesman bought the Charger from an old lady for about $10,000. Then he added modern luxuries so he could drive the Xtreme Lee around comfortably: touch screen nav, killer surround sound, the same carpeting used in a Rolls-Royce, and an engine that probably doubles the horsepower of the original General Lee (at best around 375).

The confederate flag is ultra-controversial these days, “but not in this case,” Shepherd told this reporter in 2014. “I get thumbs up from everybody, regardless of race. The African-American community created the music that I play; racism certainly isn’t part of my DNA.”

“The co-star of NBC’s ‘Knight Rider’—and the most compelling character in the series—is a computerized car named KITT that accesses memory banks and delivers information, graphs, charts, video pictures, and predictions,” wrote an LA Times TV columnist in 1984. “It jumps over buildings…gives fatherly advice to Michael Knight (David Hasselhoff) and is said to be so popular that it gets bundles of ‘Dear KITT’ fan mail.”

One of the show’s biggest fans was David Doggett, who in 1988, two years after Knight Rider went off the air, bought a black 1982 Pontiac Trans Am, just like the one on the show. Many years later, Doggett was flipping through Pontiac magazine when he saw an ad for parts he could use to turn his Trans Am into a KITT. “I bought the nose first,” says the Boeing employee. “Then I bought the dash, which was the most expensive part.” Now, behind the wheel, he was no longer David Doggett. He was Michael Knight!

In 2006, Doggett got a call asking if he’d allow his KITT to be used in the filming of a 1980s spoof called Kickin’ It Old Skool. Hasselhoff would make a cameo. The filmmakers offered a paycheck. “I didn’t tell them that I would have paid them,” Doggett says. In the process of filming, he got to meet people who’d worked on the original Knight Rider show. “A lot of great things have happened,” he says, “because of that car.”

With all the modern CGI that goes into moviemaking today, the car chase scene in Bullitt (1968) still ranks with the best, for three reasons: 1) It has Steve McQueen driving. 2) It’s raw; there is no CGI! 3) The ‘68 Mustang 390 GT blows your mind when you see it rocketing across the big screen.

John Benoit was the perfect guy to build a screen correct Bullitt replica. He runs Cascade Classics out of Edgewood, Washington, restoring Cougars and Mustangs, and he was nuts for the film. Still, he’d decided that he’d never build a Bullitt Mustang unless he found the exact car he needed. Which he found, on Craigslist in June 2011.

“I started asking the guy questions,” says Benoit. “Was it a 390?” Yes.  “Was it a four speed?” Yes. “What color was the interior?” Black with wood grain. The exterior was red, but it turned out, it’d been painted. The original color underneath that red was a dark green just like the movie car. Bingo! Benoit later learned that this Mustang had come off the assembly line two weeks after one of the two film cars did.

His restoration took two years, and there was no need for movie props. It’s just pure ’68 Mustang GT goodness—in green. “The thing about Bullitt is, everyone of our era knows that movie,” says Benoit. “People see the car and go: Whoa! Is that the real Bullitt car? It’s not. But it’s close!”