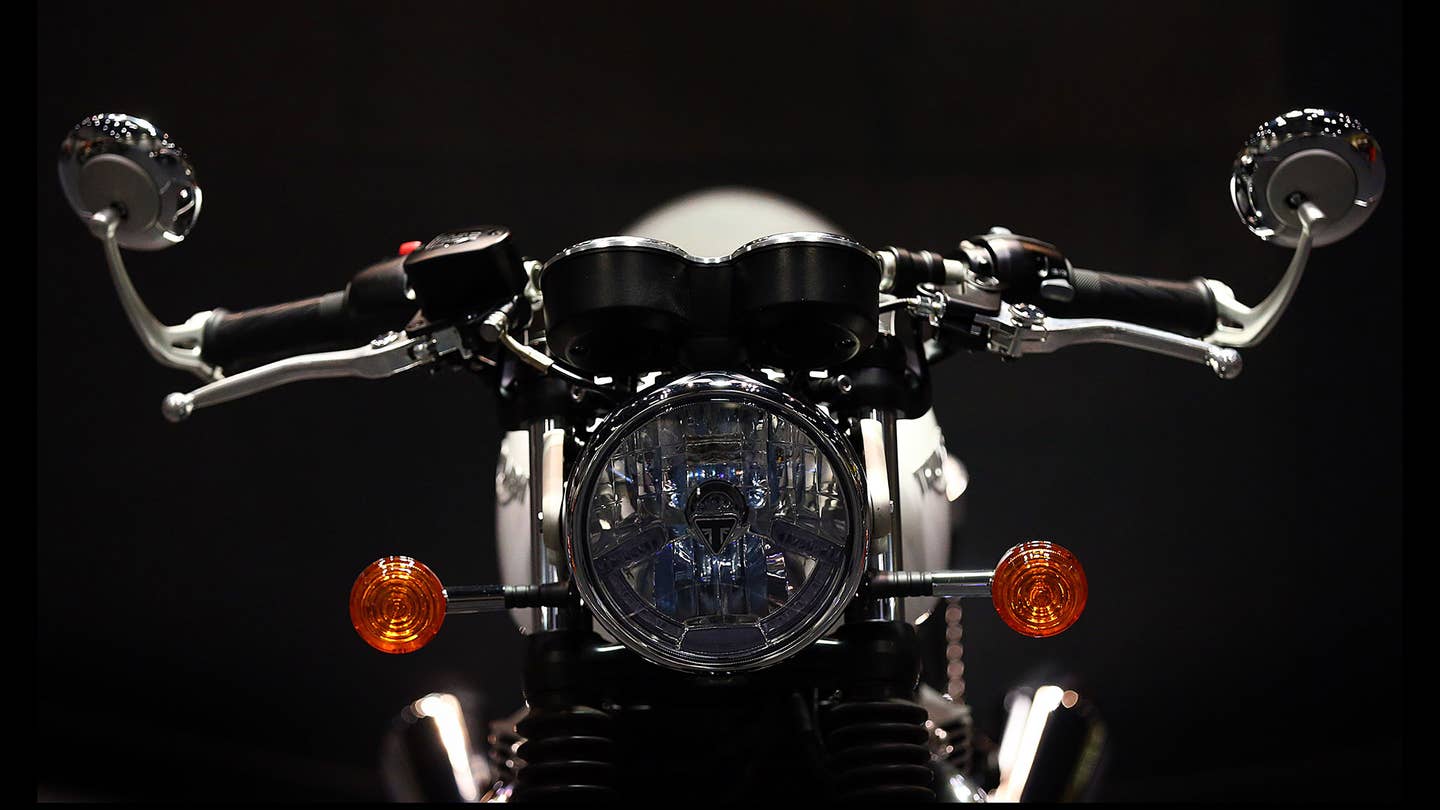 For nearly 40 minutes I had been hunched over the tank, chasing the setting sun across the Chihuahuan Desert, riding down Texas 118 from Alpine to the ghost town at Terlingua. But now it was dark. The sun had outrun me. And as I glanced in my mirrors, I could see another challenge looming: a massive thunderhead that looked like a coiled cobra, spitting lightning far off across the desert.

I grabbed a handful of brake and hauled my Triumph Bonneville Thruxton down from 80 mph, then headed to a nearby hill to get a clear view of what was coming, and maybe, a view of how far my bike and I had come. The answer to that last question: a very, very long way.

This isn’t a story about storms or deserts. It’s not a travelogue. It’s a thank-you note to a motorcycle that is, I suppose, about to be obsolete, from a man who, I suppose, is also teetering on the edge of obsolescence. This week, Triumph unveiled its all-new Bonneville range: five bikes, including the top-end Thruxton R. The company switched to a liquid-cooled engine, with a complete redesign of the frame and body. No one from the media has had a chance to test ride these bikes yet. Still, it’s an exciting time to be Triumph fan, and not just because new bikes will hit the showrooms in 2016. This is a magical motorcycle, and here’s why.

I am probably more emotionally attached to the Thruxton than I ever was to two of my three wives.

It’s been eight years since I first spotted the taxi-cab yellow 2007 Triumph Thruxton at the far end of a used bike showroom in northern New Jersey, and even before I threw a leg over it for the first time, I was smitten. It had just 75 miles on it, and the salesman assured me that it was in pristine condition, and that its former owner, a dentist, had been just as taken with it as I was. But with its harsh, clip-on bars, and a seat that seemed specifically designed to soften up the rider for a visit to the proctologist, the dentist wasn’t willing to make the sacrifice the bike demanded. Surely, the salesman suggested, I was the kind of guy who was up to the challenge.

I bought it on the spot.

In eight years, I’ve put 30,000 miles on that bike. A handful of those have come in the last week, as I rode to Texas from my home in Pennsylvania. I’ve owned a dozen bikes, and I flogged some pretty hard, on every kind of road and in every place from the coast of Maine to the Louisiana bayou. But none of them have evoked the visceral joy I get from this bike. I am probably more emotionally attached to this motorcycle than I ever was to two of my three wives.

It has 68 horsepower, so it’s not the fastest bike out there. And it’s certainly not as comfortable as some of those fat Bike-o-Loungers I passed on the way down to Texas. It’s a blessing that it only gets about 115 miles to a tank of premium, since after 100 miles, the cinderblock-hard stock seat is bound to make the average rider feel like the new guy in the prison showers.

But the magic of the Thruxton has never been the kind of thing you can measure in terms like 0 to 60. You measure it in how fast it can drag a guy my age back to his early twenties, and it’s something you see literally every time you stop to stretch your legs and fill the tank. Strangers will ignore the Lego-like Yamahas at the next pump over. They’ll step around the blinged-out Harleys that look like they were accessorized by Donald Trump’s hairdresser. And they’ll head straight for the Triumph.

Every time, they’ll share a little of themselves with you. Just the other day, I stopped for a breather near the Cowboy Church outside Bastrop, Texas. One old cowboy ambled over and launched into a reverie about how, 40 years ago, he had raced across Europe on a 750 Triumph Bonneville that looked just like mine. A few minutes later, a younger cowboy, looking as if he had just stepped out of a Larry McMurtry novel, said softly that he wished his dad were still around to see my bike, because the old man had always loved the British iron.

That’s the magic of the Triumph Bonneville Thruxton. It’s a machine that exists as much in the past as in the present. It’s a bike that doesn’t just close distances between places, it closes them between strangers.

As I write this in a tent in the desert outside Presidio, Texas, the rain pounding, Triumph is celebrating the launch of its new line of Bonnevilles. They’ll make 20 percent more horsepower, they’ll have stiffer suspension, and better brakes, at least up front. The race-inspired, top-end Thruxton R will have a mighty 1200cc engine. But what nobody outside of Hinckley knows yet is whether, in improving the mechanics, they’ll dampen the magic. Time will tell.

I suppose I’ll give Triumph the benefit of the doubt, and I might even ride up to a dealer and look at one. It’ll take me a while, though. There are a lot of gas stations between here and home, and a lot of friends the bike and I will make along the way.

Seamus McGraw is the author of Betting the Farm on a Drought: Stories From the Front Lines of Climate Change, and The End of Country: Dispatches from the Frack Zone. He lives in rural Pennsylvania.