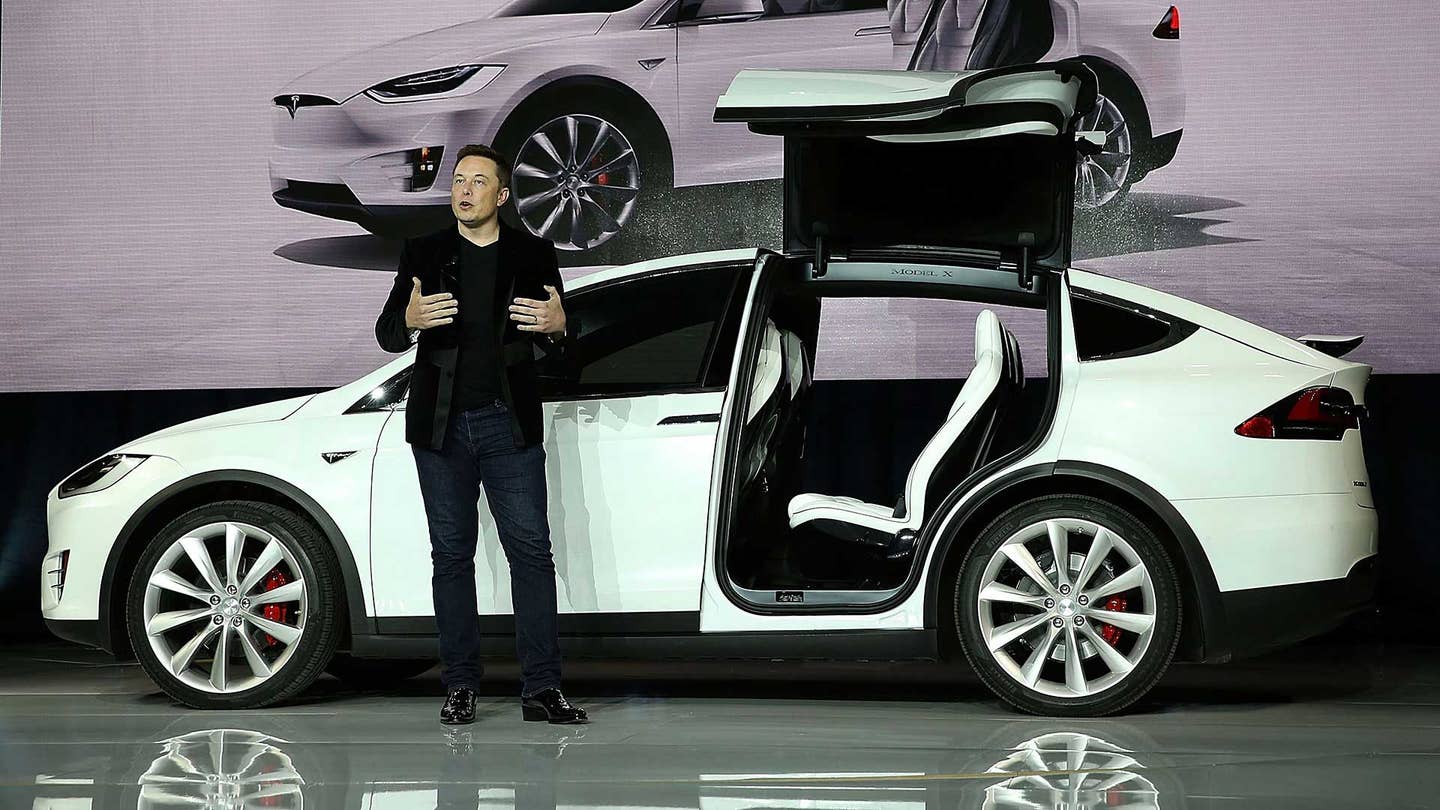 The guest of honor showed up two years late for its own party, and proceeded to demand a six-figure cover charge. No matter. Journalists cheered like starstruck tweens at the much-belated unveiling of the Tesla Model X, held at the electric-vehicle manufacturer’s Fremont, California, factory. All were relishing the opportunity to shower the electric SUV and its creator, Elon Musk, in awesomely adjectival superlatives. Musk must always be the Pope, Henry Ford and the Avengers in one: infallible, revolutionary and here to save the world.

Despite the glacial sales of electric and plug-in hybrid cars, I remain bullish on their potential to conserve fuel, ease global-warming emissions and bring a new dimension of fun to driving. And the sleek Model X, with its claimed 250-mile electric range, 3.2-second zap to 60 mph, seven-passenger capability and ingenious falcon-winged rear doors, can help address all those imperatives. Credit where it’s due to the X’s designers and engineers, and to Musk, who may yet succeed where a Tucker or DeLorean failed. But Musk, whose hobbies include a commercial rocketeering program, doesn’t actually need to conquer the solar system. He’s got his own alternate universe, an army of media stormtroopers to guard his electrified galaxy.

From Fremont, where Toyota and GM once built boatloads of affordable small cars, the media’s view is cockeyed. Here, the Model X, which starts above $130,000 and requires a $5,000 minimum deposit, is actually mainstream and competitive. After all, Porsche sells the six-figure Cayenne Turbo and BMW the X6 M, and the X is faster than either. Bentley and Lamborghini, we were reminded, are readying their own fantasy SUVs, while everyone from BMW to Audi is entering the luxury electric market.

Listening to Barbie-level math lessons, I wanted to take Tesla’s apologists and hook their nipples to the biggest lithium-ion battery I could find.

Excuse me, but Tesla’s pitch—the one that hypnotized every venture capitalist, green-car fan, Silicon Valley mythmaker and, it might be noted, the U.S. Department of Energy—wasn’t that it would compete with Bentley or Porsche in the exclusive ultra-luxury ranks. Surely the federal government didn’t create $7,500 EV tax credits to give tech billionaires a discount on a six-figure SUV, or to hand Tesla a competitive edge against Lamborghini or BMW.

No, Tesla and Musk promised nothing less than to revolutionize transportation. The company’s gun-jumping followers took it a step further, saying Tesla would quickly put Detroit out of business, seemingly cheering the thought of tens of thousands of Americans thrown out of work, and watching Motown floated on an iceberg down the Detroit River. That revolution is apparently on hold. But look out, Bentley!

For those who’ve forgotten, let Musk remind you. Here, his own words from the Model X’s spoiled-debutante party:

“The mission of Tesla is to accelerate the advent of sustainable transport. It’s important to know that any kind of car can go electric.”

Yes, and especially those enormous, overwrought 5,500-lb SUVs (a Model X weighs nearly as much as a Cadillac Escalade, by the way) that wealthy Americans greatly prefer to, you know, small electrified cars that are affordable and efficient. Too bad those don’t make valets jump at the Mandarin Oriental.

And even after the champagne and euphoria were out of their systems, not one journalist called Tesla on its blatant bait-and-switch; to note that the price of each successive Tesla—Roadster, Model S and now Model X—has gone up, not down.

Those Nissan Leafs, Chevrolet Volts and hybrids from Ford or Toyota? Those cars are actually addressing the need to bring affordable electrification to the masses, but they tend to get a collective yawn from media. After all, they don’t have a “Ludicrous Mode” for supercar acceleration, or a quirky visionary in charge. And they definitely don’t have the Tesla’s articulating Falcon doors, whose swoopy complexity distracts everybody from their impractical cost. It’s like that Chris Rock bit about shiny rims: “They’re spinning, and they’re gonna spin!”

Even more irresponsibly, some continue to report Tesla’s increasingly vaporous claims on the Model III as a fait accompli. That’s the smaller Tesla sedan, originally slated to arrive next year, priced at $35,000 to compete against the Nissan and Chevy. Yet Musk cautioned that, if you order a Model X today, it won’t show up in your driveway for up to 12 months. That would seem to kick the Model III even further down the supercharging road, but no one was asking. Because, did you see those Falcon doors? They’re swooping, and they’re gonna swoop!

Rather than bringing Tesla closer to the goal of the Model III, the Model X may be a 2.5-ton warning sign that the company is either unwilling or unable to pull it off. The Model X’s prohibitively expensive technology, including its low-volume aluminum construction, batteries and propulsion system, is virtually identical to that of the Model S. In other words: The Model X may hold seven passengers, but its technology and price hold no evidence that Tesla has realized critical economies of scale in design, materials and manufacturing. Or, a technical breakthrough that would reduce the enormous cost and mass of its batteries. So Tesla appears no closer to its promise of bringing affordable electric cars to the masses. The Model X, in fact, moves the goalposts in the opposite direction. Musk says he plans to build 500,000 vehicles a year by 2020, but I’m not holding my breath. (And not because of VW diesel NOx.)

As Tesla was debuting a new entrant into the market of unobtainable SUVs, I happened to be driving the second-generation Chevrolet Volt around San Francisco, ground zero for the world’s electric car market. That plug-in Volt, as my test drive proved, can now cover 60 miles on electricity alone. That’s enough to beat the official rating of 53 miles, and more than enough to make the Volt a full-time electric car for the typical commuter. Those 60 miles registered the electrical equivalent of 116 mpg, for about $1.50 worth of juice. The Volt then seamlessly switched into its gas-electric hybrid mode, and showed me a laudable 45 mpg, city and highway alike. All told, the Volt covered 106 miles and used precisely one gallon of gasoline. One. The Chevy can also cover 420 miles at a pop, too, nearly double the Model X’s advertised range. And it can run from Los Angeles to New York without ever stopping to charge its battery, something you’ll never do in any Tesla EV.

The Volt won’t out-accelerate a Porsche, but it’s peppy, luxury-car silent and reasonably fun to drive. The price? Less than $27,000 after the federal tax credit, or as little as $24,995 if purchased in an EV rebate state like California. Sorry if you haven’t heard much about the Volt, or models like it, over the cheering from Fremont.

As Model Xs roll off the line at a relative trickle, boosting social status and soothing the tax burden on those who can actually afford them, Tesla’s media minions will continue to pose a specious question: When will mainstream automakers start competing with Tesla? The real question is, when will Tesla actually start competing with mainstream automakers?