Unorthodox Ford Crash Test Is a Violent Reminder to Buckle Up, For Pete’s Sake

Watching these dummies fly will make you cling to your seatbelt. 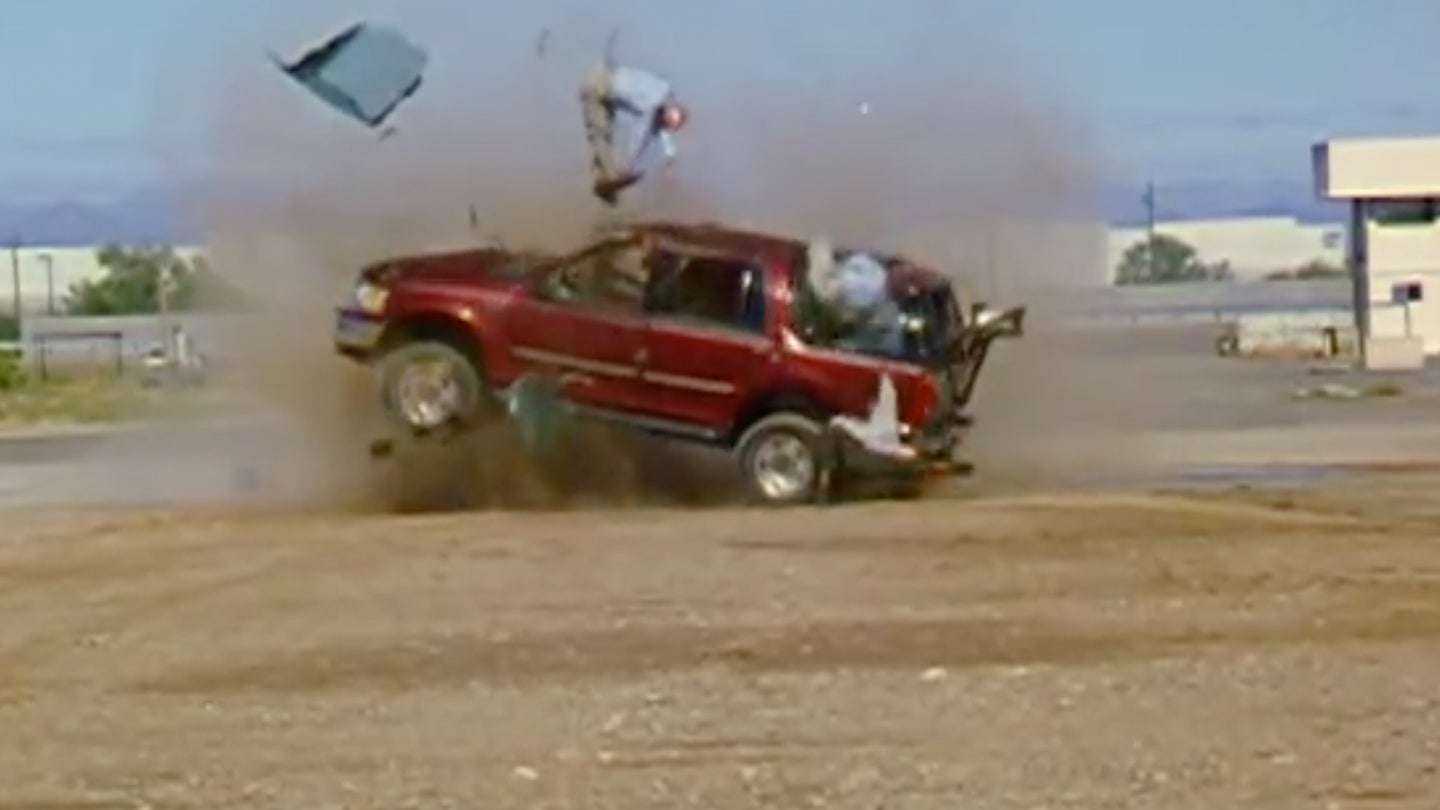 A crash test video made several years ago by Ford has been making the rounds on the internet lately as a much different vision of safety testing than we usually think about for our vehicles. The company was performing the unconventional tests to illustrate the strength of its glass, but the aftermath is genuinely unsettling.

In the video, we can see the 1998 Ford Expedition being pushed sideways on a trailer. Once the rig comes to an abrupt stop, the lumbering SUV is thrown into a violent series of rollovers and ejects all of its passengers in the process. This probably wouldn’t happen in a “normal” crash of this type, but Ford left all of its dummies unbuckled for dramatic effect.

As disturbing as these clips are to see, they stand as a strong reminder to buckle up. The Expedition’s passenger compartment appears to stay mostly intact, but even the one “person” left inside after the tumble would have been tossed around enough to inflict some serious injuries.

Ford’s test is unconventional, to say the least. When the feds put vehicles through the wringer, there are generally four major areas that get tested for crashworthiness: side-impact tests, small overlap tests, moderate overlap tests, and frontal impact tests. You’ll notice that there’s no “violent rollover crash with unbuckled passengers” test listed there. Various parts manufacturers crash test vehicles as well, such as giant transmission maker, ZF. These companies test the integrity of the products they make and sometimes film the results for PR purposes.

That sort of test is likely what we’re seeing here. Ford wanted to show off the strength of its glass and the ability of its passenger compartment to withstand such a dramatic crash, and included the flying dummies as a further stunt to illustrate the importance of buckling up. The Zerofatalities YouTube channel picked up the video years ago to help promote their cause of seatbelt safety and education.

Radically Nautical 1999 Ford Expedition SeaScape Might Be the Best Way to Spend $6,500

This yacht-inspired build comes complete with rad graphics straight off your uncle’s pontoon.

Camp Anywhere in Comfort With the Bruder EXP-6 Expedition Camper

Whether it’s the wilds of Russia, Zambia, Alaska, or Tiera del Fuego, everywhere is now accessible.