The shop modified a Ram 3500 rear axle and had to custom-fab an independent front suspension setup. 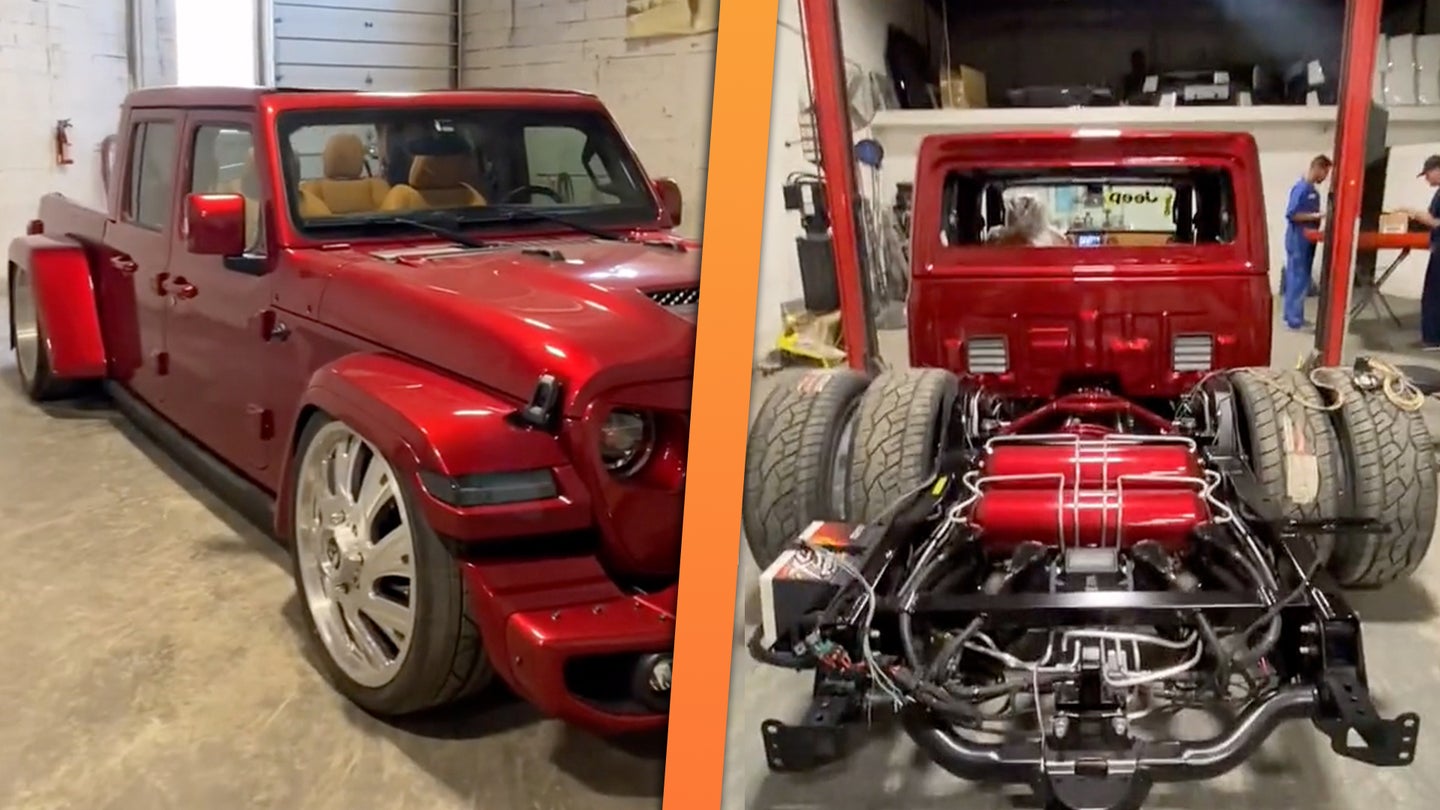 SEMA vehicles are their own breed entirely. The impressive builds that line the Las Vegas Convention Center each year are often met with slack-jawed gawking over the level of craftsmanship (well, usually) that goes into each unique ride.

After more than a year of hard work, a Canadian body shop has started teasing its near-complete Jeep Gladiator build for this year's SEMA return. The unique build features a custom dually setup, air ride suspension, a supercharger, and so much more that puts this once-off-road pickup over the top.

Co-Up Auto Body in Ontario conceptualized a dual-rear-wheel Gladiator last March. The vision was to take the factory black Jeep and transform it into a lean, mean, air-ride machine coated in Acura's beautiful Iconic Red paint.

The shop began by removing the front solid axle and fabricating a front independent suspension to fit the new air ride, documenting the process on YouTube along the way. From there, the team built a custom rear axle setup sourced from a 2008 Ram 3500; next was the fuel tank, brake lines, rear frame notch, and a number of additional one-off components in order to ensure that the truck would lay flat on the floor.

Bodywork was next on the list. Custom flares were fabricated to clear the rear tires when aired out, and a hinged box floor was added to show off the dual air tanks, quad compressors, hardlines, and Airlift management. The team then painted the car in Iconic Red, the hero color for the current-generation Acura NSX. Even otherwise hidden components like the rear axle were painted, showing clear attention to detail.

This isn't shop owner Jagraj Grewal's first rodeo. In fact, he owns another Jeep—a JK Wrangler—which is also on air ride suspension. That particular vehicle features a 6.4-liter Hemi V8 like in the Rubicon 392, and while it seemed like a perfect fit for the Gladiator project as well, the shop instead chose to go with a Magnuson supercharger to breathe new life into the factory 3.6-liter V6. They estimate that this will bump the output up to around 425 horsepower.

The Gladiator is "about 90 percent completed" according to the shop, with some subtle odds and ends that still need wrapping up.

Originally, the Gladiator was supposed to debut at last year's SEMA; however, the show was canceled due to the global pandemic. The builders saw it as an opportunity instead that allowed them more time to perfect the final product ahead of its full reveal in Las Vegas this November.