Many junkyard Mopars have died so this Dodge may live. 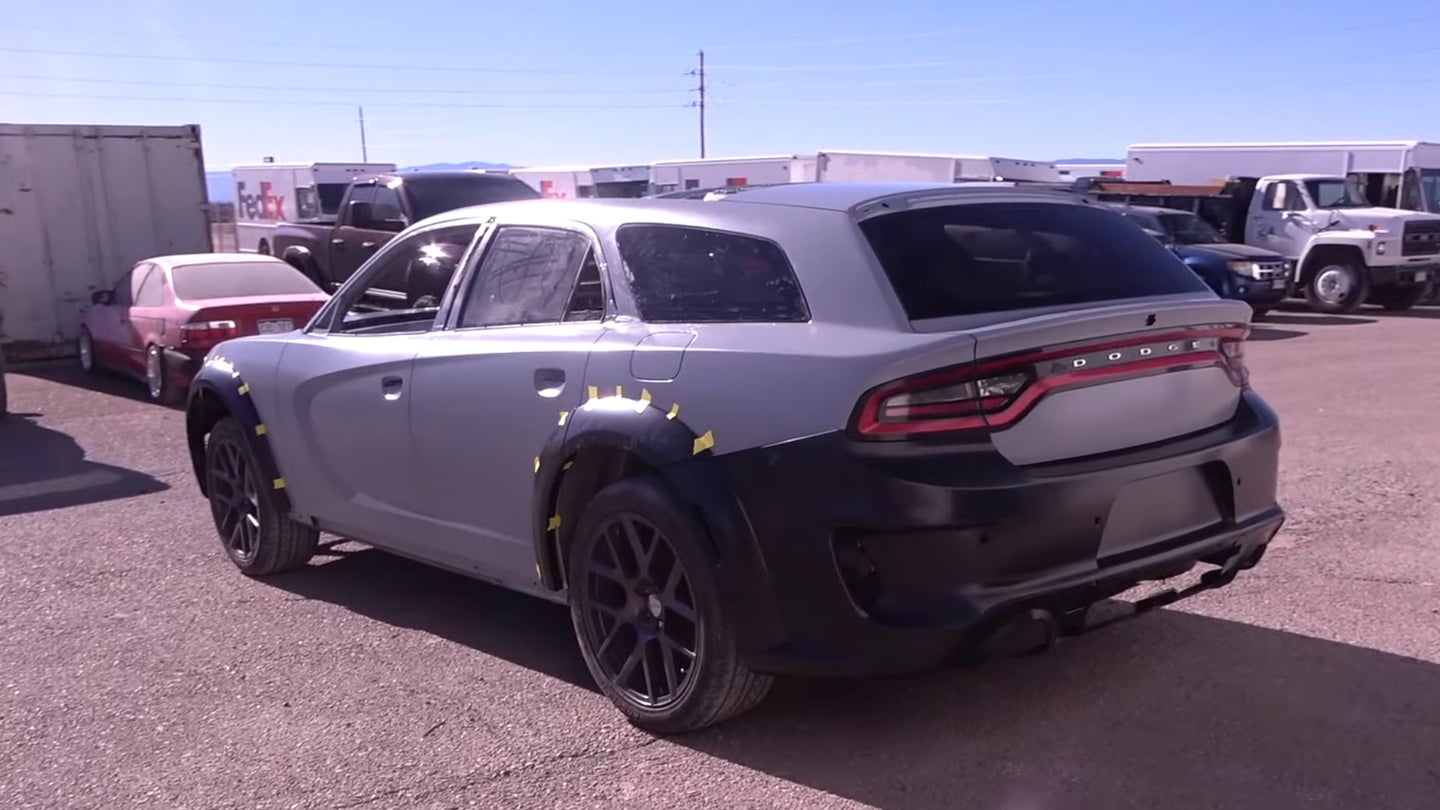 Wagons aren't as popular today as they once were, but that doesn't mean everyone has forgotten about them. Many enjoy the smooth wagon lines, and the practicality the body style offers. As my dad once put it, "Wagons are cool, son. They're just a sedan with a fanny pack." And just a few years ago, Dodge was making an angry wagon called the Magnum, sharing a platform with the Charger and Chrysler 300.

Many were sad to see it go, including—I'm assuming—YouTuber Junkyard Dave, aka David Nenno. A self-described laid off mechanical and electrical engineer, Nenno has embarked on a fantastic project: to create the Charger wagon Dodge doesn't build today. This isn't just a project to test Nenno's Bondo skills, however. The car is receiving widebody panels from Dodge, and the engine and drivetrain from a Jeep Cherokee Trackhawk. That means an AWD, supercharged Charger wagon making 707 horsepower on the worst day of its life. Nenno, of course, plans to get that horsepower figure closer to 1,000, though.

The project started seven months ago with the ritual disassembly of a 2015 Dodge Charger, which was a previously stolen car bought at an auction for cheap. After most of the four-door was stripped out, the process of grafting the rear hatch from a junkyard Dodge Magnum onto the back of the new Charger began. As of today, most of the body panels have all been welded on, filled smooth, and primed for paint. The widebody bumpers, side skirts, and fenders just arrived recently, so they're next in line.

That being said, even with the stock Charger's wheels hiding inside the fenders and the car riding high due to the lack of a drivetrain, it just looks right. Nenno says he plans to install not only the Trackhawk drivetrain, but the wheels as well, so those arches will be filled with 325-millimeter-wide tires to boot.

As far as actually making it run and drive, the car's floor will need to be cut up to accommodate the Trackhawk's transfer case. The front differential/axle situation will need to get sorted out as well, which likely involves modifying the front subframe. A custom driveshaft will then have to be made to get power to the rear end, which will be sourced from the same junkyard Trackhawk that the rest of the drivetrain is coming from.

And despite the massive amount of work it will take to get all of this working right, it's definitely worth it. With how good even a tall-riding, dinky-wheeled iteration of this car looks, it's surprising Dodge doesn't make a lifted wagon based on the Charger labeled as a crossover—like the AMC Eagle Wagon—and throw a Hellcat motor in it. They would sell at least three, I'm sure of it. It's also an easy excuse to rehash an existing platform it has to make a "brand new vehicle."

Think about it: there are more trims of Charger and Challenger than there are atoms in the universe, and making this car—which is really just another trim in itself—would allow for the brand to apply all of those trims (and more) to a "brand new vehicle."

If Nenno can make a prototype for this sort of thing over seven months using only existing Mopar goodies, I don't see why Dodge can't at least tease us with something similar at SEMA.