Ford Must Build a Mustang Raptor

It's just as stupid as it sounds. And that's precisely why it would sell out instantly. 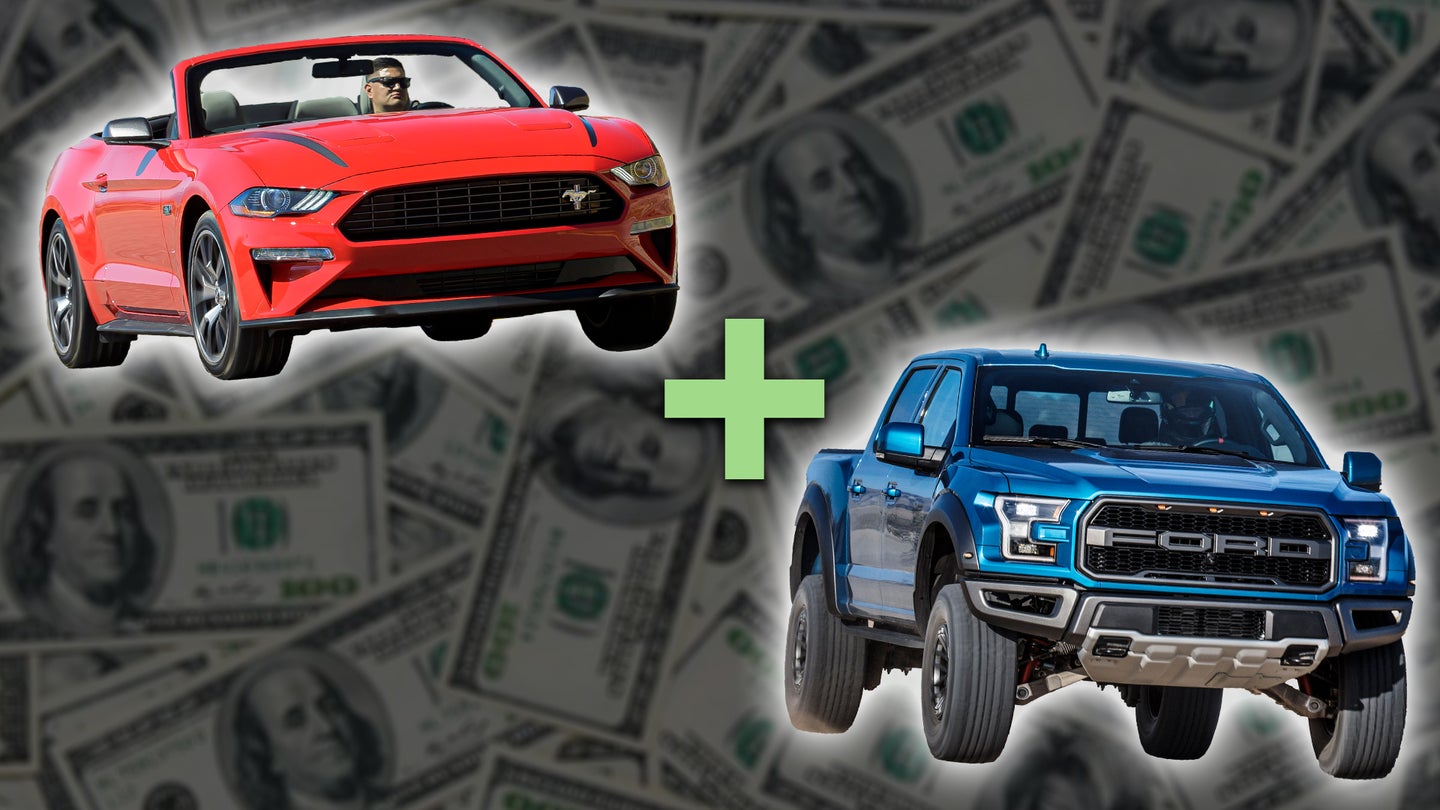 Nothing, not even Shelby badges, do a better job selling Fords than the word "Raptor." On its own, it evokes a predatory dinosaur, and on a truck, it calls to mind a gallivanting vehicle that's as at home being driven hard on the road as off it. So far, the name has only appeared on the F-150 and its little brother the Ranger, whose Raptor variant Ford cruelly decided won't be sold here.

It has yet to grace anything other than a pickup truck, though it seems almost a given that it'll eventually find its way onto the new Bronco, and after that, maybe even other models, like the Mustang. That could sure as hell use a Raptor variant of its own.

Yes, this is an argument for a Mustang Raptor. Lay down those pitchforks and, for a brief moment, entertain the idea.

Now, anyone who knows a thing about off-road trucks can give you a few reasons why a Mustang Raptor isn't a good idea. It doesn't have the ride height to skip over obstacles like an F-150, its unibody won't flex enough to shrug off big impacts, and being exclusively rear-drive, it would be good for pulling dusty drifts and little else.

The suits will also point out that there's no production capacity for such a vehicle in any of Ford's plants, and that its business case would be similar to the Ford GT's: absurdly expensive to engineer and produce, and all for a market that's maybe a couple thousand people worldwide.

But as that same suit would also be forced to admit, the GT supercar was more a branding exercise than anything else; a project meant to help change how people thought about Ford. And if the amount of media exposure that the apparently forgettable GT got says anything, it's that people still love a good hype project, and it's harder to imagine a vehicle more worthy of that title than a Mustang Raptor. A lifted, carbon fiber-clad pony car, with fender flares big enough to make Liberty Walk kits look like add-ons, and a partial cage in place of the rear seat.

Let it also encase a lump of lithium-ion batteries that power an electric motor on each BFGoodrich-wrapped front wheel, with rear-axle power coming from the Shelby GT350's howling, 5.2-liter Voodoo V8. With independent throttle bodies, of course.

And those aforementioned mechanical obstacles aren't nearly the problems a cynic would make them out to be. Ford already has the tooling in place for Mustang unibodies and powertrains, and while assembly and Raptor variant-specific engineering would prove costly for Ford, it could save itself the effort by contracting the job to a third party, like it did for the Multimatic-built GT. The fact that this would all be outrageously expensive wouldn't matter for a car Ford could literally sell just 100 of for $300,000 apiece, call it quits, and bask in the hype for decades.

This all goes without mentioning the Raptor potential of the Mustang's futurist little brother, the Mach-E. The value of zero-rpm torque doesn't need an explanation to the rock crawlers out there, and those who prefer their off-roading at higher speeds can take comfort knowing that prototypes of the Mach-E already look awfully fast. Again, lift the thing, and wrap it in carbon fiber, but instead of trading the back seats for batteries, throw a 5.0-liter Coyote V8 back there, and use it as an oversized range extender like the Canadians do. The Mustang is already a crossover, now; you know someone wants to go the extra mile with it.

Should all this sound too fragile for Raptor duty, it'd be relatively easy to toss either unibody onto a Ranger frame. Mishmashing truck chassis and car bodies is already how people build odd-job off-roaders, and if a Good Ol' Boy can do it in a collapsing barn, Multimatic can sure as hell make one in its labs.

And as long as we're dreaming, Ford could ice the cake by making either vehicle a Ranchero-style ute. Granted, that wouldn't make much sense if Ford ends up using that name on the little Focus-based pickup that rumors says is coming to America, though recent reports suggest the Courier and Maverick names are more likely candidates. One can't help imagining, though, that Tom Cruise wouldn't be seen behind the wheel of a roughly Focus-shaped truck. One shaped like a Mustang? That's more like it.

Now I need Ford to only take notice of my very good idea and put it into (limited) production. Ford can even waive my normally generous consulting fees here; sometimes seeing their ideas manifested is all people need to be satisfied in life. Offering a week in the realized Mustang Raptor would be a solid way of saying thanks, though.