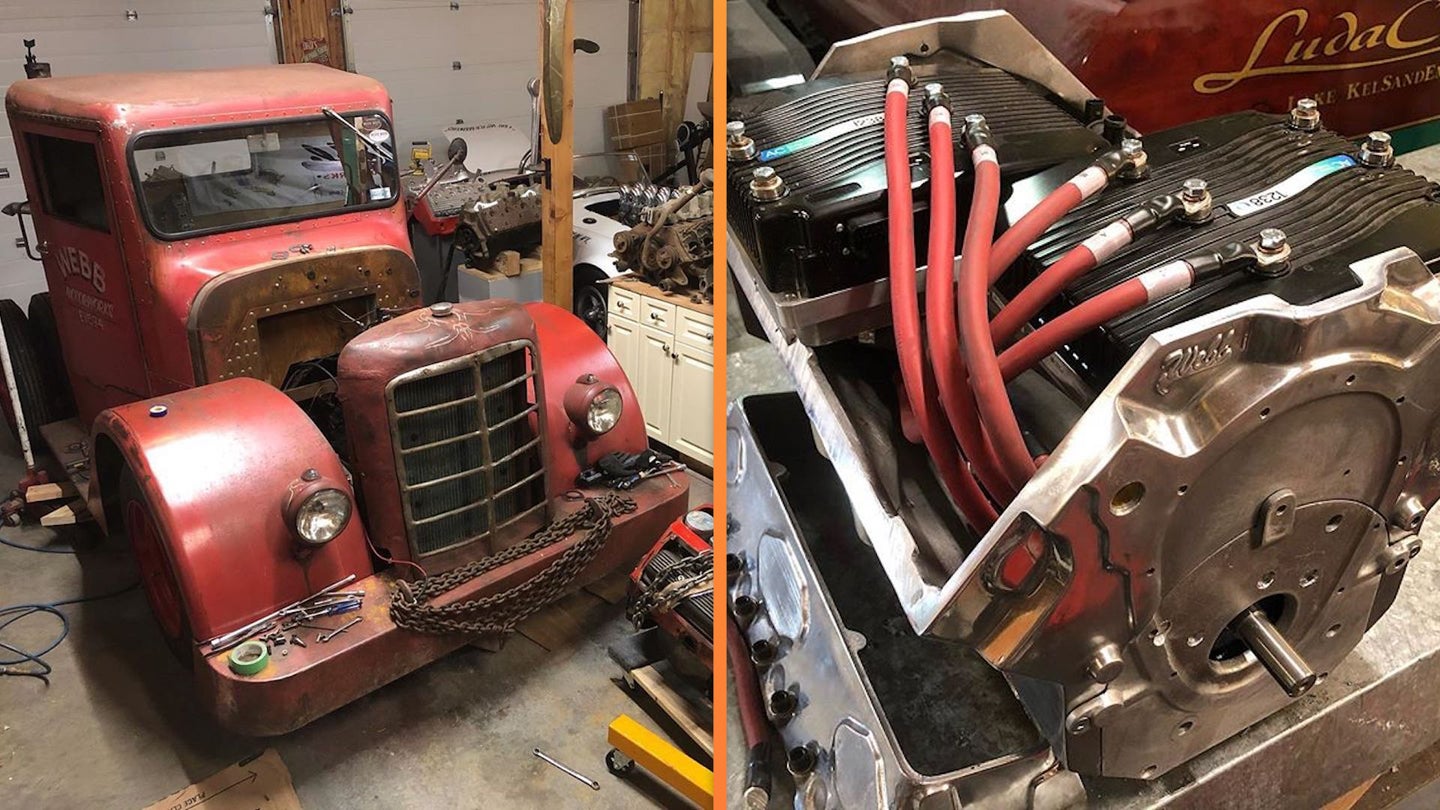 As the owner of a hot rod shop and the builder of a V16-swapped 1956 MG A, Chris Webb's credentials as a petroleum purist are unquestionable. He's the last kind of person you'd expect to join what some see as the Dark Side by converting a classic truck to electric power, but if you peep in the engine bay of his 1936 Hayes pickup, you'll notice something amiss about its small-block Chevrolet V8: It doesn't make a sound. That's because it's just a facade for an electric motor, one that makes 257 pound-feet of torque from zero rpm and will eventually give Webb's vintage dually the grunt to do smoky, near-silent burnouts.

Webb explains on his YouTube channel that he got the idea for the project from his daughter Emily, who told her dad she wanted to drive a hot rod like him, but she wanted hers to be electric. Though initially taken aback, the Canadian approached the idea of an electric motor swap with an open mind and as soon as he found out about the instant torque and minimal maintenance, he was sold—but not on building one for his daughter. No, Webb wanted the magic of electric drive for himself and set about turning his preexisting project into an electric truck, albeit one with the same combustion-engined look it always had.

Hiding the rat's nest of cables was achieved by having an acquaintance cast a fake Chevy small-block to house the drivetrain controllers, their heat sinks, an electric fan under the air cleaner, and a 96-volt electric motor. Webb hopes to eventually squeeze 500 electric horsepower from this motor, but the high cost of batteries currently limits horsepower output, not to mention range. The ingenious Webb, however, addressed the latter by moving the truck's Chevy V8 to its bed, where he will hook it to a pair of generators that'll keep the battery topped up. In essence, Webb has built a range-extended EV, also known as an RXEV.

Webb expected to catch flak from the hobby's old-timers when he told them what he was up to, but surprisingly, he says they were all excited to see how the final product will come out—as are we. He may not be the first guy to come up with the trojan horsepower that is an electric motor stuffed into a V8 block, but Webb's use for an E-V8 like this is the most exotic we've seen so far. Let's hope he finds a way to get his Hayes on the road sometime soon and, eventually, sell motor setups like his to other new-generation hot rodders.

We’ll be waiting a while to see the all-powerful electric truck.