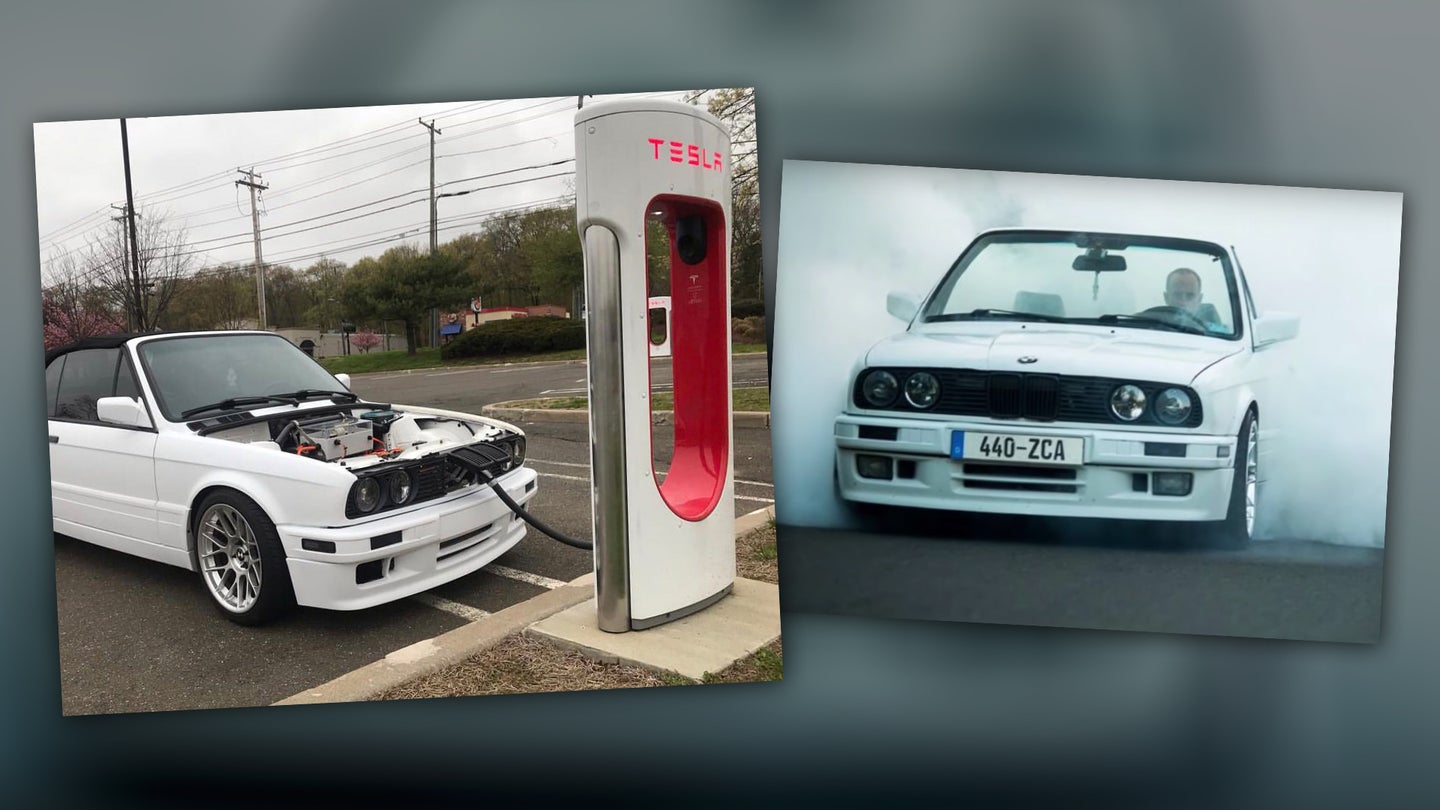 Classic cars and electric drivetrains link arms in greater numbers every year, and the latest of the electro-classics to gain attention on the internet is an electric BMW 3 Series (E30) built with parts from General Motors and Tesla.

Connecticut resident Jon Volk was in possession of an old BMW 3-Series convertible that had previously undergone an LS V8 swap. It's a common transplant for its parts support, reliability, compact size, and most of all, power—but Volk decided he wanted to try something less conventional with the car and settled on an electric conversion as his next challenge.

"I previously had an LS swap in the car, but decided I wanted to try something different and learn the technology up front rather than playing catch up in a few years," Volk told The Drive.

Thus began the process of engineering an electric drivetrain in a classic BMW. Volk had to blaze the trail for himself, as there's no off-the-shelf battery conversion kit for 80's BMWs. Cramming a Tesla motor into the E30 was tricky enough, much less linking them to GM batteries through third-party controllers and inverters. This meant learning CAD (Computer Aided Design) to craft mounts for every new component. From the 32 kilowatt-hour lithium-ion battery, charging system, and inverter from a Chevrolet Volt to the Tesla motor, everything needed a way to bolt to the BMW.

Front-to-back, here's how the drivetrain has been put together. Behind the factory grille lies an air-to-water intercooler repurposed as a radiator, which cycles coolant through the motor, battery, and charging system, as directed by a Tesla-sourced four-way coolant valve. Half of the batteries are located where the BMW's oily original engine once was, along with the charging system, while the others live out back, in the trunk. Beneath this, clustered in the rear axle drive unit, are the motor, controller, and reduction gear, plus the inverter.

Modern EV batteries are notoriously heavy, but this Bimmer isn't so; it weighs just 2,960 pounds, of which 65 percent is over the rear axle, similar to a Porsche 930. Significant rear weight distribution, Volk says, should keep the car stable under regenerative braking, as well as normal braking, the brakes now being manual, without a source of vacuum to drive a brake booster. How much power the car makes isn't certain, as Volk says he hasn't gotten the car on a dynamometer yet, though 380 horsepower is considered feasible, as it's the Tesla motor's factory power rating.

Despite having never worked on a project of this sort before, progress was swift—almost too swift, worrying Volk some.

"When people would ask me how the build was going, I would jokingly say a little too easy... That I was waiting for the wheels to fall off," Volk told us. "Well, they certainly did when I tried powering the motor for the first time, and nothing happened at full voltage."

"It turns out the inverter had a blown piece of hardware. The original drive was sourced through an eBay seller. The replacement was through the guys at Electric GT, and was a much more positive experience. Overall it was actually really easy. Particularly for never messing with this stuff before. It's just really important to remain cognizant of not becoming part of the high voltage circuit when working on the car."

With the power source and charging mechanisms sorted, Volk could move on to how to get the power from the rear axle-mounted Tesla motor to the wheels themselves. He settled on machining down the motor's output shafts to accept an adapter to factory E30 axles, and then used electron beam welding to fuse the adapter on, readying the car for final assembly. And really, the mechanical challenge has dwarfed the battle against armchair critics.

"There have obviously been some detractors, but that's the case with anything new," Volk said. "Once upon a time they said fuel injection was overly complicated and would never catch on."

It helps that the electric E30 will still smoke its rear tires with the best of them.

"The instant torque is awesome, and it'll burn tire effortlessly," Volk said. "That should be somewhat helped once I get a chance to swap the Quaife helical LSD out of my blown motor."

Volk hasn't just built this car for static, showy displays of horsepower, though—he hopes the car will handle as well as it accelerates and plans to take the car out to the famous Lime Rock track for some lapping. But all this will have to wait until the car's a bit closer to completion.

"I just drove the car for the first time last week, so there are still a number of minor loose ends to tie up. The hood is going back on, and I still need to paint the hinges and extract a broken bolt from it first," he said. "I haven't done much extended driving to get a feel for the range, but it should be around 100 miles per charge. I plan on implementing Chademo DC fast-charging in the near future."

Volk admits he misses the sound of the LS engine and its lumpy idle—but he's found that silent speed can have its own allure.

"I haven't found anything I hate yet."