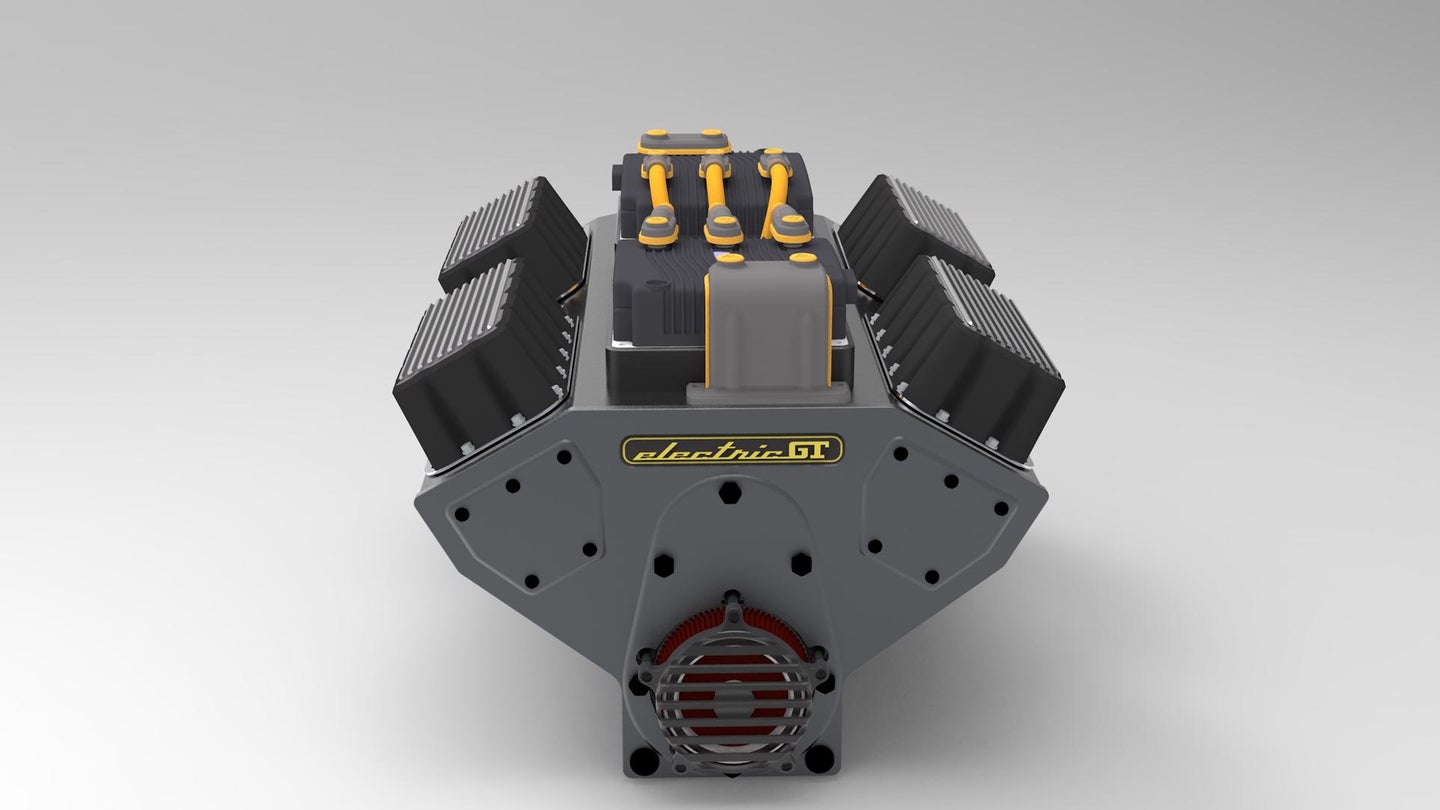 Laws are becoming more stringent for internal combustion engines. Whether they concern a car’s emissions, fuel consumption, or fire safety, the day of the internal combustion engine is coming to a close. What, though, does that mean for the world’s classic cars? What does that mean for the enthusiast hobby? Does the advent of electricity mean we have to take up—shudder—knitting? According to Electric GT, no.

While we’ve seen our fair share of electric swaps using Tesla, Nissan, and Chevrolet electric motors, aftermarket California outfit Electric GT has something we’ve yet to encounter. Constructed in the company’s Chatsworth headquarters, Electric GT created a drop-in electric motor that resembles the gas-guzzling V8s enthusiasts will likely have to remove from their car’s engine bay soon.

Speaking to Green Car Reports, Electric GT says that the modular Electric Crate Motor is currently being developed for larger production. To achieve that goal, the proposed electric crate motor is in development and resides in the company’s 1970 Toyota FJ40 Land Cruiser, which Electric GT is using as a test-bed. Depending on setup, the crate motor is capable of developing between 140 to 240 horsepower and between 240 and 340 pound-feet of torque.

The end goal, however, is for Electric GT to streamline the process and design of the modular electric motor so that customers can just call the company up, order the right accessory package, and drop the motor directly into whatever project car they like in far less time than a traditional gasoline-powered V8 swap takes. This idea also informed the design of the motor and why it’s taken the shape it has.

Given the popularity of General Motors’ LS V8 swap, and the vast array of aftermarket swap kits, Electric GT sees a modular electric crate motor sculpted to resemble those V8s as a way to encourage enthusiasts to go electric. One potential issue that Green Car Reports brings up is the crate motor’s sizing. The LS V8 measures 28.75-inches long and 24.75-inches wide. Electric GT’s crate motor measures 34-inches long, while width hasn’t been released. However, given the length, enthusiasts will likely have a slightly more difficult time squeezing the electric motor between the bulkhead and front cross-member. Electric GT says in the future, the company hopes to have a more turn-key setup.

Like other crate motors, each of Electric GT’s motors will also include the electronics needed to control the modular motors, a motor manual, and tech support from the company. Customers will also have the option to select A/C compressors, heaters, among other accessory options. Those who order the crate motor will have to source their own battery packs, though.

What’s far more interesting is Electric GT’s electric crate motor’s capability of accepting a manual transmission. According to Electric GT, “The Electric Crate Motor can be adapted to a wide range of Manual Transmissions. We design in-house adapter plates for most popular Manual Transmissions and accept custom designs. Electric motors deliver toque instantly to the gears which is much harder on gearboxes than regular internal combustion engines. Due to increased power and torque, we recommend the use of driveline components rated for appropriate specified eMotor output.”

That said, normal automatic transmissions are a no-no, “due do their need for an extra hydraulic pump and the inefficiency of torque converters.”

Electric GT has been around for a number of years, first debuting the company’s all-electric 1978 Ferrari 308 “GTE,” which used a 46kWh lithium-ion battery. Performance for the 308 GTE was pegged at 330 horsepower, 350 pound-feet of torque, 0-60 mph in 5 seconds, top speed of 180+ mph, and a range of 130 miles per charge. It also had a Porsche-sourced G50-manual transmission. It wasn’t your average swap to say the least. Electric GT has also built an electric Mustang, Beetle, Microbus, 911, 912, and BMW 2002.

Given Electric GT’s modular electric crate motor is still in the development phase, the company isn’t willing to speculate on costs. What we know is that it’s going to get harder and harder for enthusiasts to drive their vintage automobiles going forward. Safety, emissions, and fuel regulations are going to stifle the once burgeoning industry. However, what makes us excited is that company’s like Electric GT exist. Company’s that aim to preserve the hobby for future generations. We’re eager to see what Electric GT pushes to market in the near future.