This isn’t just fast for an electric car, or an SUV. It’s flat-out aggressive. 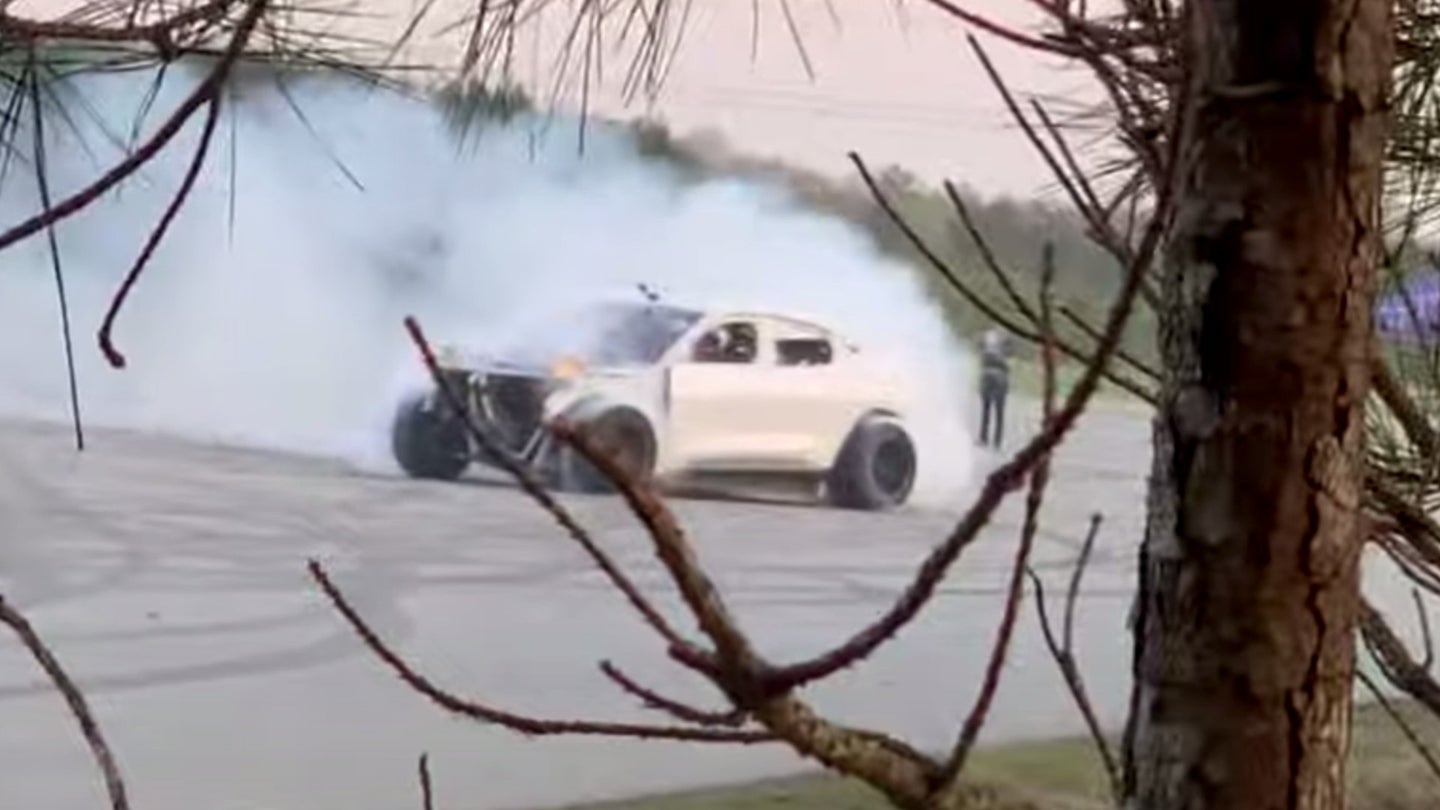 Ford is, undeniably, a massive and busy company. It recently launched the next-generation F-150—the most popular truck ever to do it—and is slated to drop its revived Bronco off-roader early next week. As if those global product releases weren't enough, it also seems as if someone is testing a go-fast version of another critical Ford model: the Mustang Mach-E. A stripped-down prototype was spied hustling around a proving ground in North Carolina and, from what we can see—and hear, kind of—it's going to be rapid.

Whether it was an actual sleuth hiding in the trees or some Ford PR rep who thought themselves clever to pose as such, the videographer was careful not to get too close to the track. Off the bat, you can tell how quickly the electric crossover is being hurtled across the empty pavement, which we suspect is located at the North Carolina Center for Automotive Research. Tires screech and brakes clamp down as it turns and comes to a stop, and shortly after, it pulls off a series of all-wheel-drive donuts.

We don't get to see much of a launch before the handy-dandy video man takes off running through the woods, thinking he'd been caught.

Now, we know Ford has hosted events at NCCAR in the past and it's entirely possible that a related crew could be using the facility for testing. What we don't know is exactly what variant of the Mach-E this might be. It seems early to invest in an even quicker road car than the current top dog GT, so it could potentially be a one-off creation or even some sort of spec racer. Might Vaughn Gittin Jr. be developing a special drift machine? Has Ken Block already torn apart his own car before anyone else even has theirs delivered?

There are some technical features to glean from the two-and-a-half-minute clip—mainly the large fans mounted at the front. These are in place to cool the prototype's supposedly upsized batteries, which likely provide more juice than the Mach-E GT's 459 horsepower and 612 pound-feet of torque. Out back, you'll spot three additional fans and even a legit cage. Apparently, it has reason enough for those massive tires at all four corners.

While we've reached out to Ford for comment, this is where we also turn to you in hopes of finding out some essential info. Do you have the inside scoop on this supposedly top-secret electric performance car? Were you the one in the woods? If so, how's your blood pressure after that "gotcha" runaway maneuver? If any of these apply to you, drop us a note: tips@thedrive.com.

In the meantime, we'll be digging for more.