Jay Leno gets up close with a prime example of Ford’s underappreciated ‘Stang. 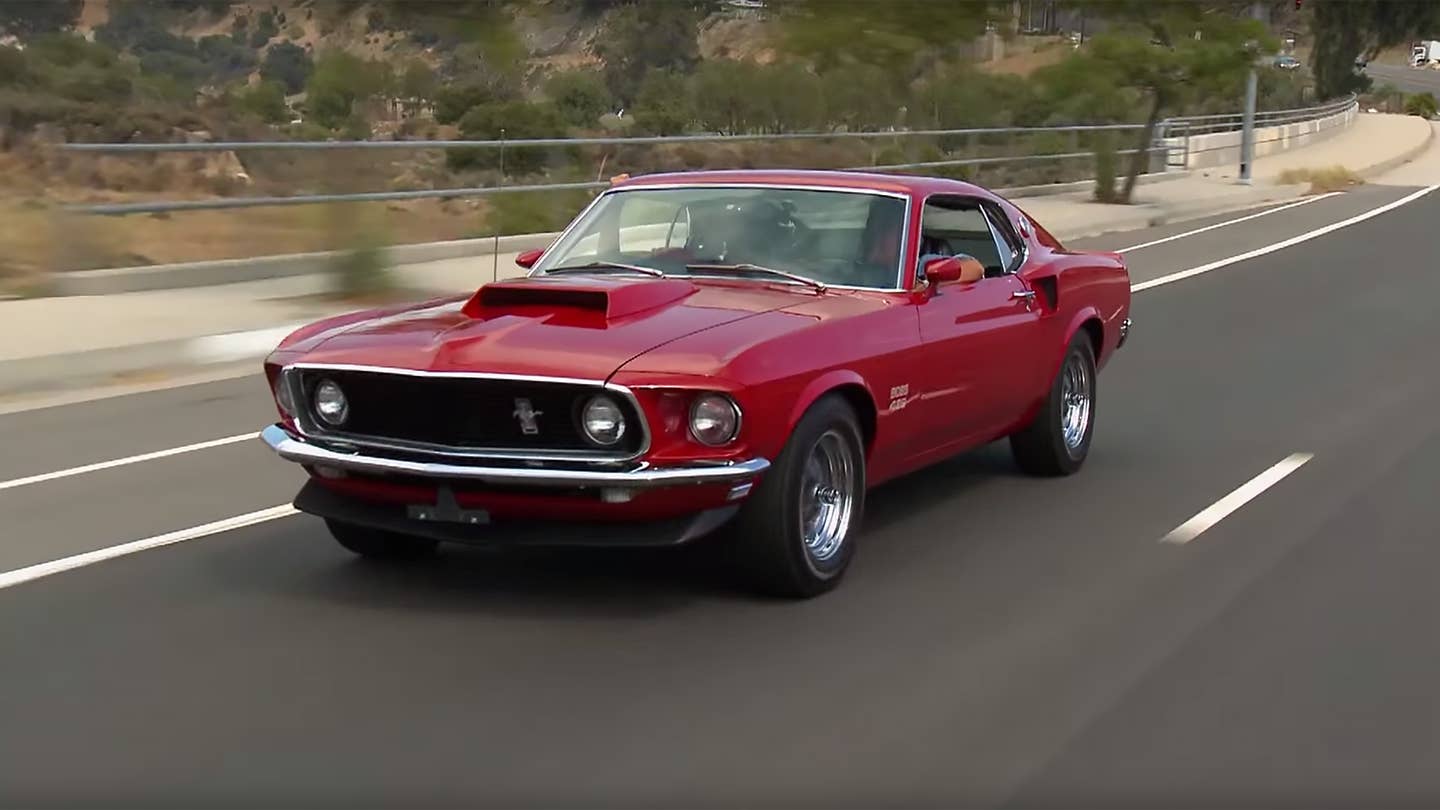 Among the rarer late-Sixties Pony cars was Ford’s Mustang Boss 429. When a bright red, perfectly-restored example finds itself in Jay Leno’s garage for his eponymous web series this week, Leno’s beyond eager to drive it. But first, a quick history lesson on how this throaty muscle coupe came to be.

When Semon “Bunkie” Knudsen became Ford’s president following his departure from GM, Blue Oval engineers had been working on the Boss 429 engine for the Galaxie. Knudsen told them to scratch that and instead figure out a way to cram that massive NASCAR V8 into the Mustang. Carcraft, a Dearborn, MI, outfit that worked closely with Ford in the same vein as AMG worked with Mercedes-Benz, was responsible for getting that prodigious drivetrain in the ‘Stang, and oversaw the entire build of the 1969 and 1970 Boss 429s. Those models were underrated in terms of competitor power. Mopar Hemis were cranking out 420-plus horsepower; the Boss 429 had 375 and 450 lb-ft of twist.

Marcus Anghel, of AnghelRestorations.com, who oversaw the rebuild, says they were written off because they “were detuned for the street. There were issues with insurance and smog,” among other things. This car featured a smog pump, which Anghel points out after popping the hood to reveal a sparkling clean engine. Anghel indicates some of the mods Carcraft had to make to shoehorn that V8 in the smaller bay, such as moving the shock towers.

Leno notes that with such a heavy engine directly over the front axle, it couldn’t have handled well. “A 289 on a road course would take this, right?” Leno asks while Anghel agrees, though says the Boss 429 did have competition suspension and heavy duty sway bars in the back and front. “But it’s like Dolly Parton doing gymnastics,” Leno cracks. “Once everything starts moving, inertia takes over.” The man has a point. Still, handling wasn’t what sold these cars. Horsepower numbers were, and Ford yearned to find the guy who wanted to race on the weekends and have a comfortable cruise to work on Monday morning. They had a little trouble finding those fellows mostly because of the sticker price.

New, this Boss 429 would’ve fetched $5,000, more than $2,000 over the base Mustang, the 428. At that price, you could have gotten a Corvette Stingray, which had better handling and was a better balanced package overall, Leno surmises. Unsurprisingly, this very car sat on the dealer’s lot for six months before finding a forever home. The first buyer put 49,000 miles on it before selling it to the current owner, along with immaculate service records. Restoring it was relatively easy, even with Anghel's remarkable eye for detail, including the production chalk marks, dealer stickers and even the random green overspray on the smog pump (which ironically Ford sourced from GM).

Leno’s never driven a Boss 429 and enjoys his time behind the wheel, even managing to get a tiny chirp hitting third gear. He likes the drive—how could he not with a big honking engine and a four-speed? “You can road trip in this, if you can afford the gas,” the comic smirks. “It’s like the strongest old guy in the world: a little dated but he can still punch you in the face.” Check out the episode below.