The Ford GT: A Sub-30 MPH Review of America's Supercar 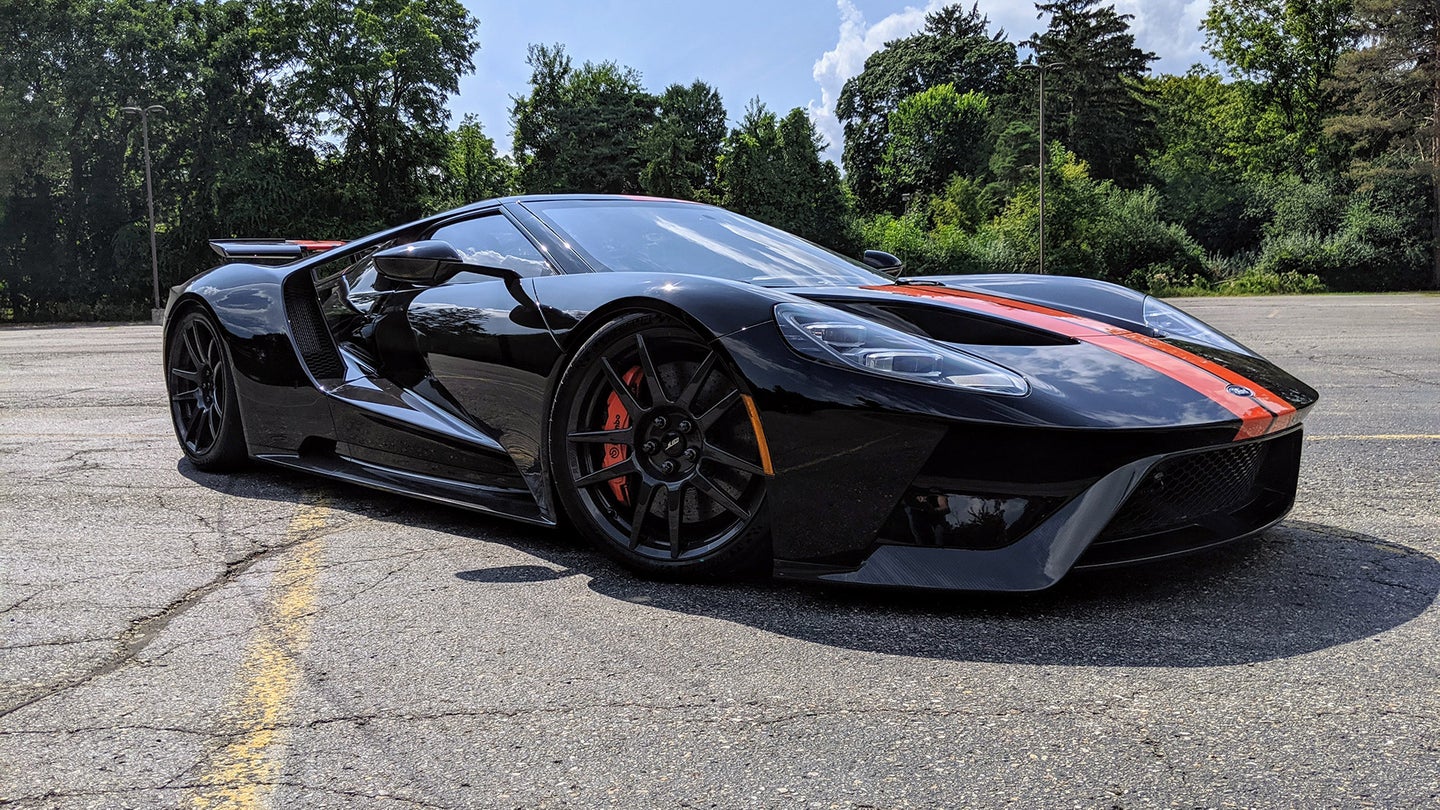 Given its roots in the mystic lore of Le Mans, it's no secret that the Ford GT is a wonder to drive on the racetrack. The path for would-be owners has been much rougher; Ford wasn't going to just let anybody slip into its 647-horsepower supercar. Prospective clients needed to convince Ford that these cars would be more than just garage queens. They had to sign a two year no-resale contract. With all that in mind, and considering it's a homologated race car with a license plate, what exactly is it like to live with a Ford GT in the day to day?

To find out, we took one down Detroit's Woodward Avenue during the annual Dream Cruise madness last month. Stop and go traffic surrounding the event is the norm, and even reaching the speed limit at any given time can be difficult. But hey, we're driving it in the exact all-around manner that Ford intended—nay, promised—it should be driven. We're about to find out if the Ford GT as delightful at 30 mph as it is on the track.

The Ford GT, By the Numbers

Getting in and out of the Ford GT is probably the most difficult part of driving the car. Only the svelte among us can climb in with any grace, but everyone else can sit on the massive carbon doorsill and swing your legs in for easy enough ingress. Once you adjust the pedals—the padded seats are fixed in place—you're good to go. Our black and orange tester, a Ford marketing vehicle, fired to life and indicated nearly 13,400 miles on the odometer. Most of them were likely hard.

The GT has a SYNC 3 infotainment system on board, which supports Android Auto and Apple Car Play. Built-in navigation and SiriusXM are also there if you want to use it. Automatic single zone climate control uses physical buttons for everything, including setting the temperature. Beyond the center spartan center stack, Ford moved nearly all of the other essential functions to the steering wheel. That includes items like the drive mode selector, high beams and wiper controls, and the turn signals. Those are a bit tricky—press either button quickly and that directional blinks a few times. Press and hold and they'll stay on and self-cancel after you turn the wheel.

Thankfully, the drive mode selector is a customary physical knob, and as an added bonus the car will remain in Sport Mode if you turn it off and on again. There's another little quirk to the drive profiles. In Track and V Max (top speed), the car's unique two-spring torsion bar suspension lowers the ride height by almost two inches. It happens fast, far quicker than any SUV air suspension setup. If you shut off the GT in either mode, it will revert to Sport when you turn it back on and instantly pop back up to the higher ride height. It's a bit jarring if you're not expecting it.

Pulling onto Woodward in a $450,000 car that doesn't belong to you, there's only one thing to think: This is a bad idea. Michigan is a no-fault insurance state. Nearly every other car around me has some form of damage, either from a collision or one of the region's famed washing-machine-sized potholes. A racetrack is probably safer than this.

Compared to our harried mental state, the Ford GT is calm and collected at 20 mph, cruising along in comfort mode and feeling more like an oddly-loud sports car than a track monster. Acceleration is linear and easily controllable. The transmission shifts comfortably and keeps the revs appropriately low. The softer suspension tuning is immediately noticeable; it's definitely more comfortable over crappy roads than, say, the 2020 Nissan GT-R Nismo.

In this low-speed test, ironically it's the carbon ceramic brakes that impress the most. Not for their stopping power, of course, but for the progressive, easy to modulate feel. There's some initial bite, but ultimately they don't feel any more special or temperamental than the brakes on a Focus. At least until you really stand on them.

The biggest takeaway in stop-and-go traffic is just how compliant the Ford GT is when it's just putzing along. It'll do it all day, and you might not mind it either; visibility is reasonable out of the front, and if you keep the wing down seeing out the back isn't awful either. But there's no blind spot monitoring, and the side mirror positioning—extending far out from the car to see around those massive rear haunches—takes some getting used to.

But enough of comfort. A quick twist of the drive mode knob to Sport livens up the GT. It holds gears longer, makes downshifts more dramatic. The DSSV suspension tightens up. The throttle is crisper—overtaking a slower car is effortless, regardless of how much space you have to complete the maneuver. And if you're fortunate enough to catch a red light as the first in line, mashing your right foot on green will take you across the intersection before you can blink. Of course, you'll back off at the speed limit.

In either Comfort or Sport (V Max and Track are best left for places other than Michigan's cratered roads), the Ford GT is eminently approachable. After a few minutes of getting used to the view below other cars' beltlines, you'll soon be weaving around slowpokes, maybe even using the high beam button like a Le Mans driver to send rolling roadblocks scurrying out of your way. Like any performance car, it'll turn you into a jerk if you let it. 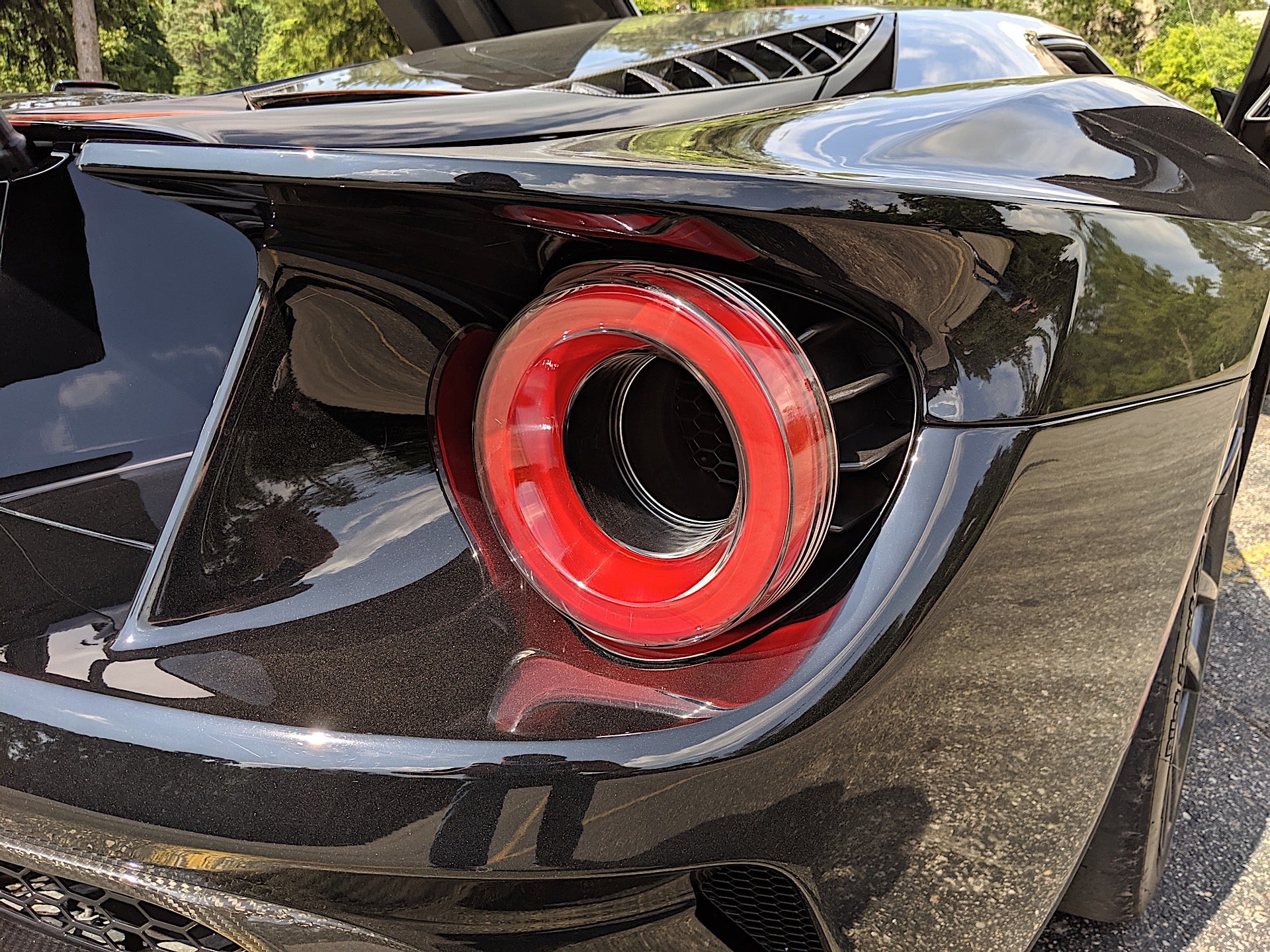 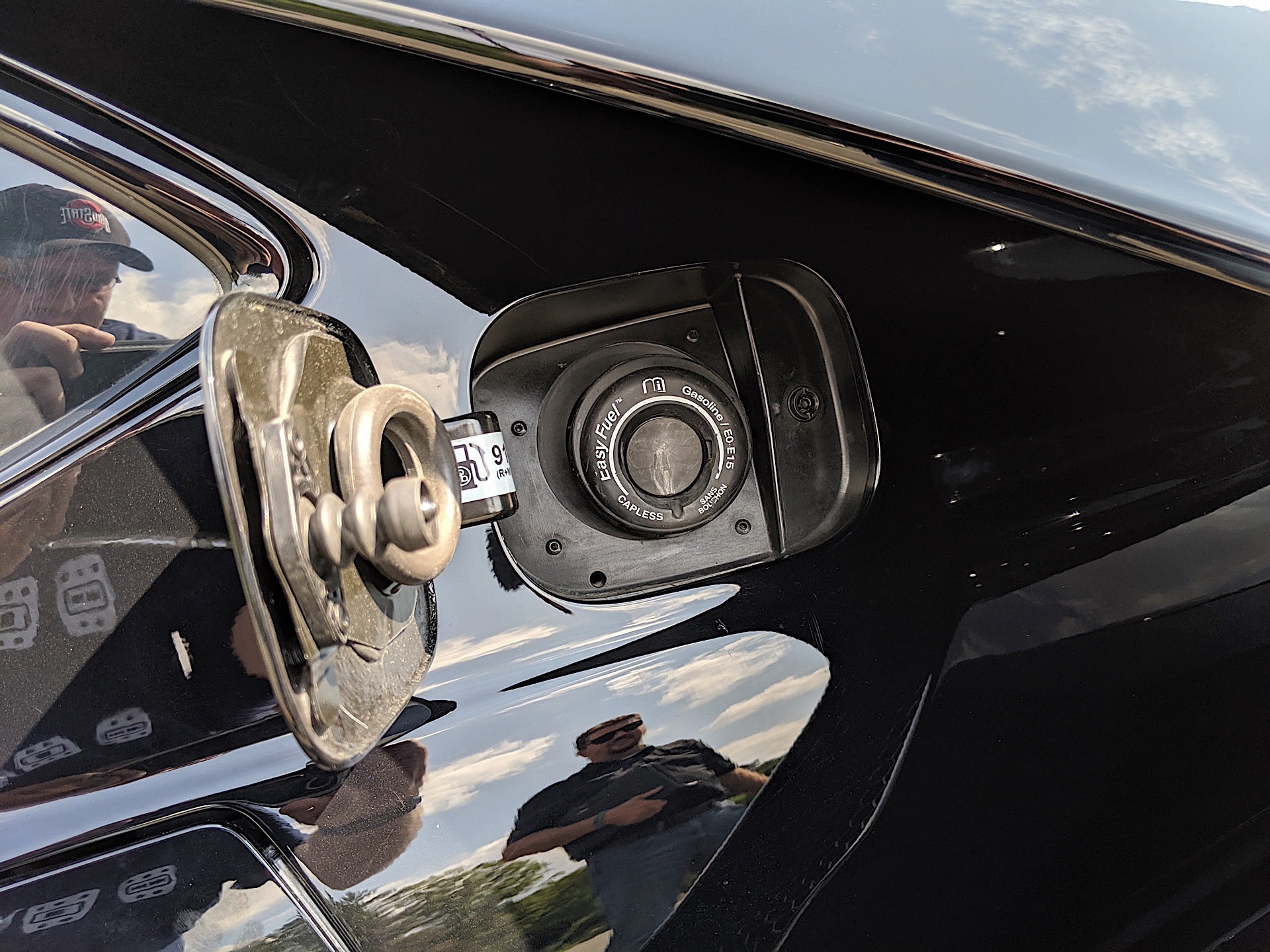 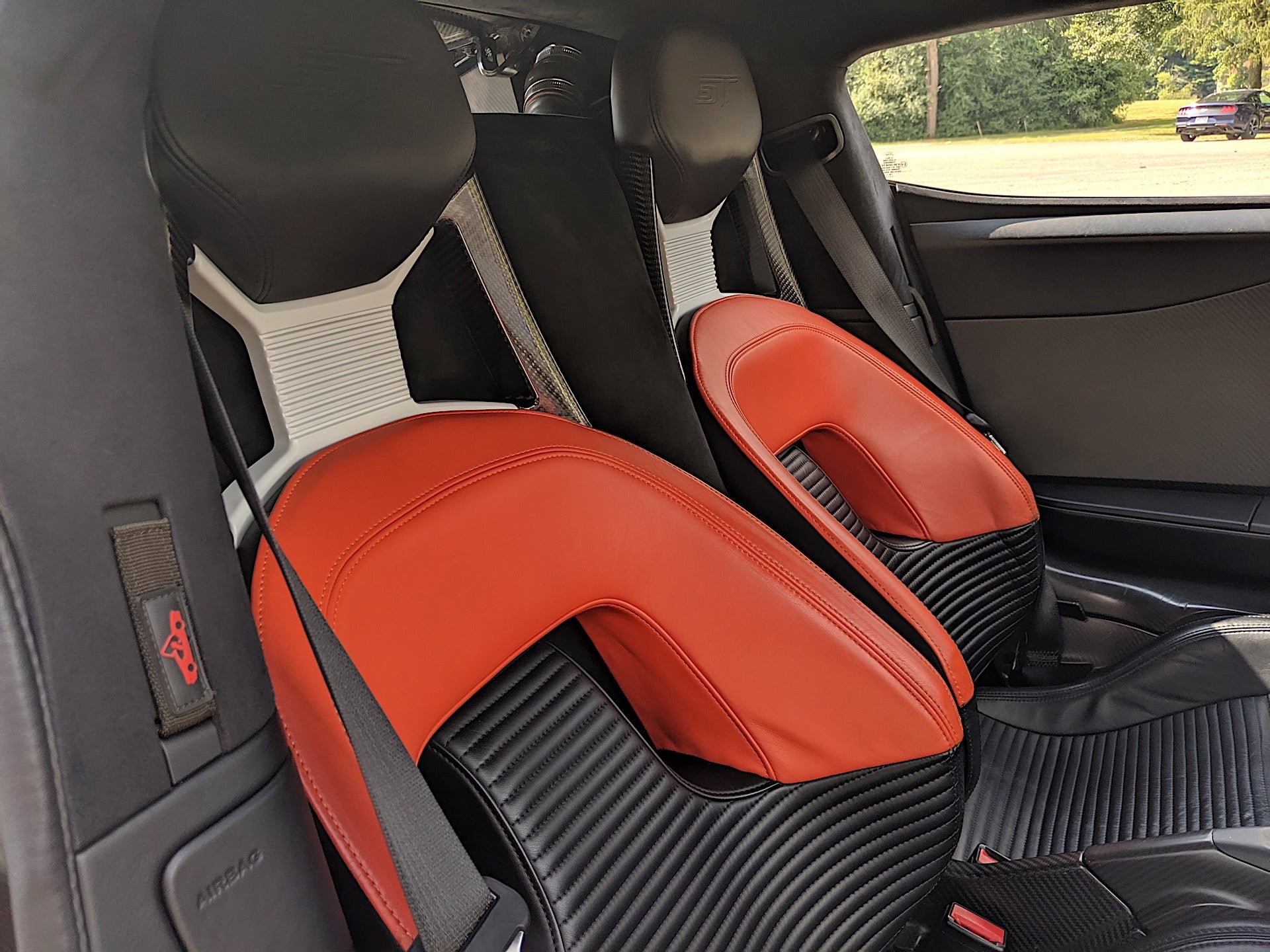 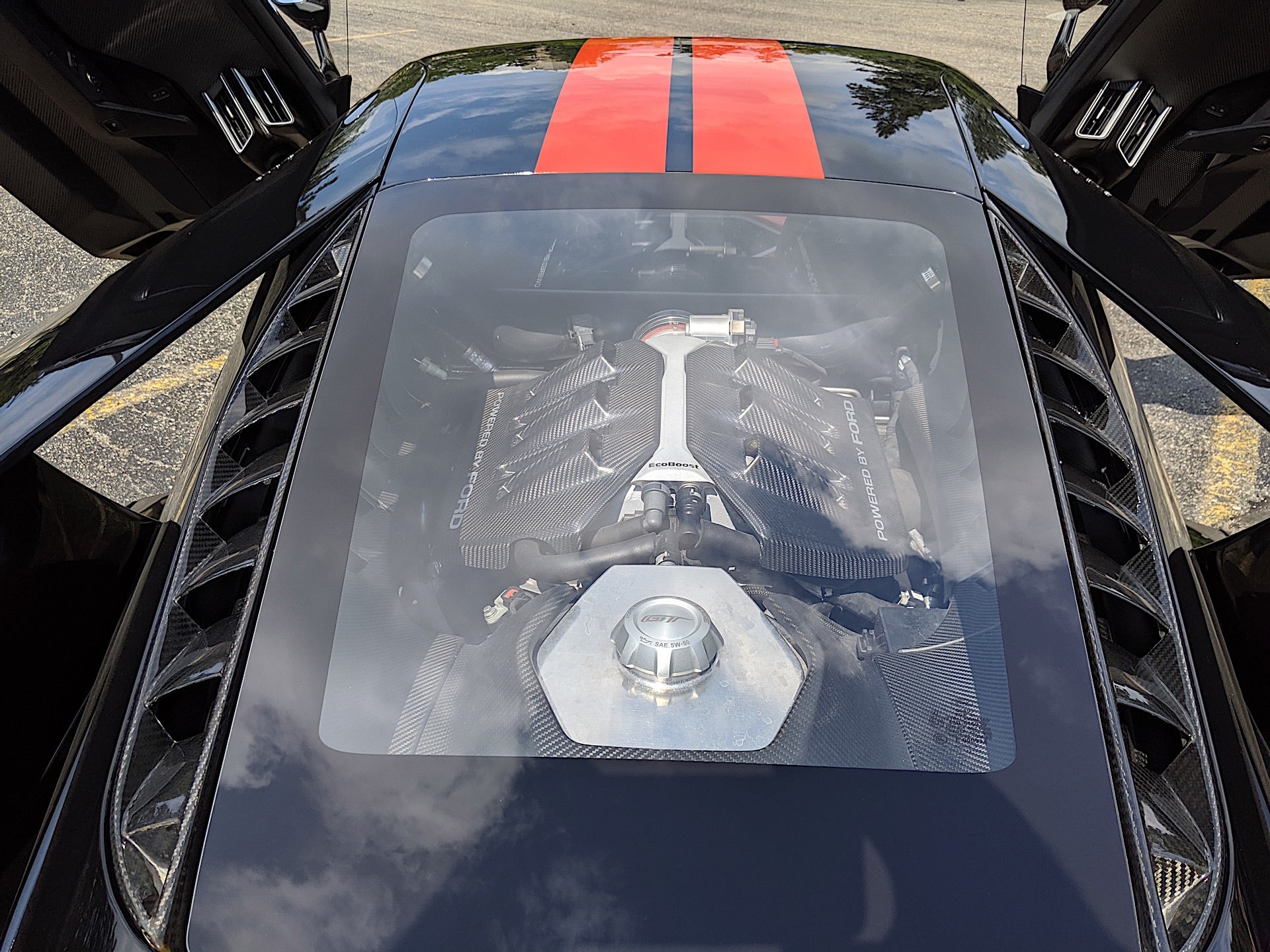 So really, daily driving the Ford GT seems quite reasonable apart from one thing: the noise. Ford made no real effort to quiet the cabin, and the result is a confined space filled with mechanical whirrs and thuds from the moving wing and suspension, not to mention the angry bee exhaust note of its 3.5-liter EcoBoost V6. Undoubtedly there are a few people who would never tire of the visceral experience, but we're wagering it would get old after the thousandth time.

And even if it's comfortable enough around town, the Ford GT would also be out of its true element on a road trip. Storage space is abysmal—less than a cubic foot—and really, all the noise might drive you insane after a few hundred miles. The seats are fine for a pleasure cruise, but they're essentially just pads bolted to the driver's cell. Not ideal for longer journeys.

Still, credit where credit is due—even at 30 mph, the Ford GT feels special. It's easy to impress with a car's amazing limits. It's a lot tricker to make a car that performs at those heights and still makes you giggle driving down a main drag like Woodward Avenue on a busy day. A supercar should wow on every front; it should feel like more than just a sum of its parts at any speed. In that regard, even if it's too cacophonous to be a daily driver, the Ford GT delivers.