It's no Cybertruck, but that's kind of the point. 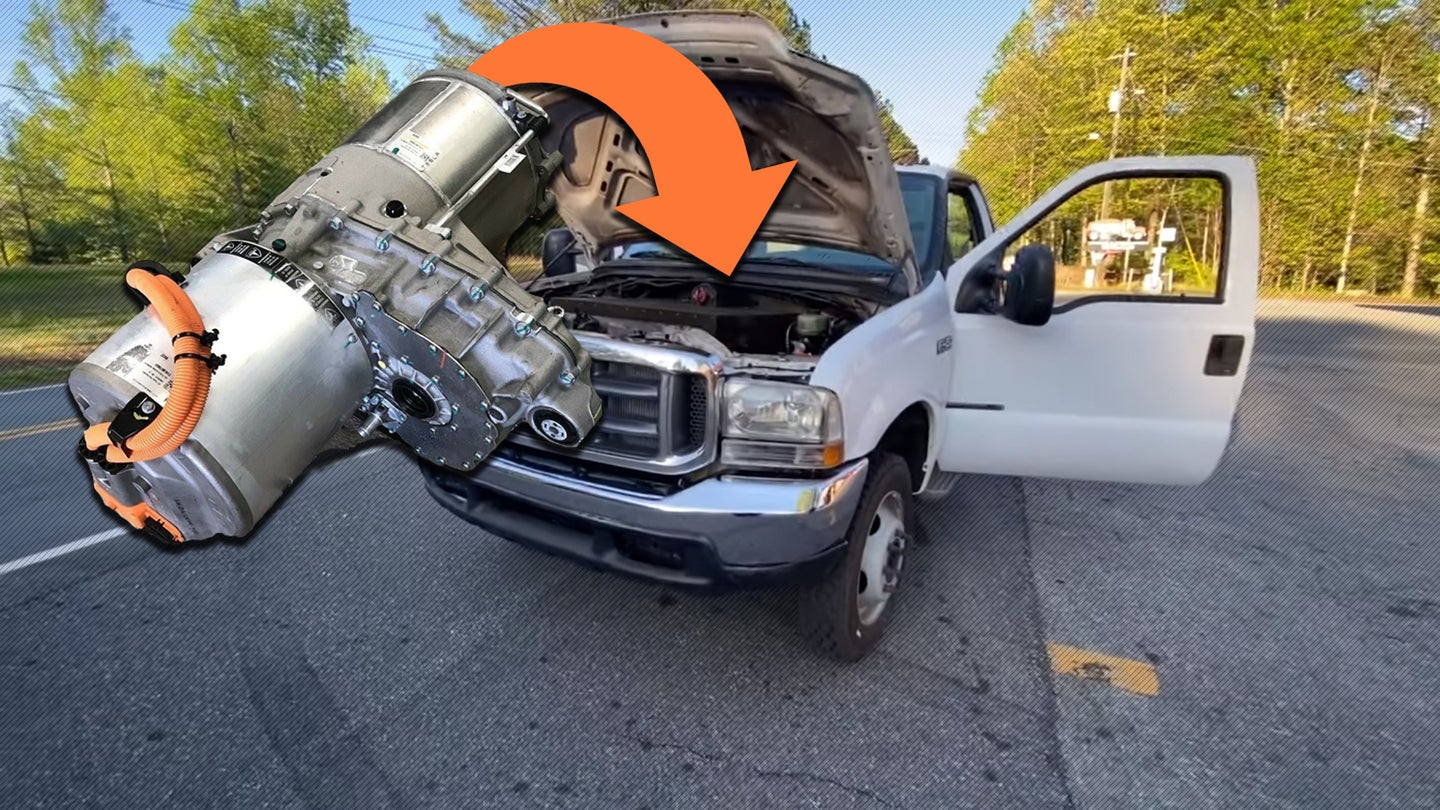 There's something satisfying about unorthodox swaps. Taking a power plant developed for one vehicle and cramming it inside of another platform it wasn't designed for is like plugging your ears and cranking up the outro to Rage Against the Machine's Killing in the Name. Now, there's an even more satisfying kind of swap on the horizon that's been taking the aftermarket scene by storm: EV swaps. And, in case you were wondering, that includes pickup trucks. So move over Cummins, Duramax, and Powerstroke lovers—it's time to let the battery boys come out to play.

Today's interesting swap comes courtesy of avid EV-enthusiast-turned-YouTuber, Greg Goes Electric. Last week, Greg released a video of his latest creation driving on the street, and it isn't just any old '90s sports car. Instead, he brought out the big guns and swapped the guts of a huge 2004 Ford F-450 Super Duty for that of a Tesla.

The project began by plucking the F-450's 7.3-liter turbo diesel engine and its transmission. Greg then machined a custom adapter plate to mate a spare electric Tesla motor with the F-450's transfer case and fabricated mounts to secure the motor to the underside of the truck. This means that despite the lack of a transmission, the truck will still be able to switch between two- and four-wheel-drive, as well as move between high and low gears thanks to a twin-stick transfer case shifter from Offroad Design.

A custom fabricated battery box constructed from one-eighth-inch steel sits under the hood, holding a total of 16 Tesla battery modules. One side of the battery box is used for the electrical components while the other is used to distribute coolant throughout the battery packs.

The F-450 weighed in at a whopping 5,240 pounds, though that's only 593 pounds more than a Model S P85. Greg says that the weight savings from the factory 7.3-liter diesel and its transmission were around 100 pounds, meaning that the overall weight increase was only 493 pounds. Moreover, because the battery box was fabricated to utilize the factory mounting points, the truck's overall weight characteristics should remain fairly close to stock.

Greg doesn't mention overall range, but it's worth noting that similar battery configurations in the Model S net around 265 miles, though we're sure that's at least somewhat sapped by the 500 pounds of added weight, age of battery modules, and the fact that the F-450 shares aerodynamic characteristics with that of a brick.

The interior of the vehicle was also modified. Greg refers to the large blank dashboard as a "pallet" for digital and analog gauges, though most of the functionality takes place via a centrally mounted EVControls T-1C Controller, a $3,500 piece of hardware which interfaces with the electric motor, power inverter, brake lights, and other components to ensure smooth operation. The interior was also fitted with sound dampening to mask road noise otherwise covered by the truck's diesel powerplant.

If you're interested in a more technical walkthrough of the truck's functionality, Greg has recorded a number of in-depth videos on how everything works, including the one below:

While Greg doesn't mention which drive unit is used, we have a feeling that the donor car may have been a Tesla Model S P85, given the number of cells and use of a single drive unit. Of course, the fuel neck was removed and fitted with a Tesla charging port, though we're fairly confident that even if Tesla would allow a non-Telsa vehicle to use a Supercharger, some owners would be convinced that this truck was ICEing rather than charging.

This swap is one of the coolest we've seen in a while. While it might not be the most efficient way to haul a car, it's extremely cool to watch a huge F-series pickup roll down the street without the recognizable chug-a-lug of a diesel powerplant. Now it's time to wait for the first official electric Ford F-150 to hit Copart.

Watch This Tesla-Swapped Nissan Skyline R32 Drift Car Silently Slide Around By Chris Constantine Posted in News
A Tesla-Swapped E30 BMW Means You’ll Never Miss a Yellow Light Again By Jared Auslander Posted in News
Some Madman Tesla-swapped an Audi and It's Fantastic By Rob Stumpf Posted in News
Why Are People So Against the $100,000 Ford F-450 Super Duty Limited 4×4? By Max Goldberg Posted in Test Drives
Hot Rodder's Hybrid 1936 Pickup Hides an Electric Motor Inside a Chevy Small-Block V8 By James Gilboy Posted in Tech
MORE TO READ