This Ford F-350 Super Duty With a Semi Sleeper Cab Is Real, and We Tracked Down the Builder

Is this the ultimate long-haul rig? 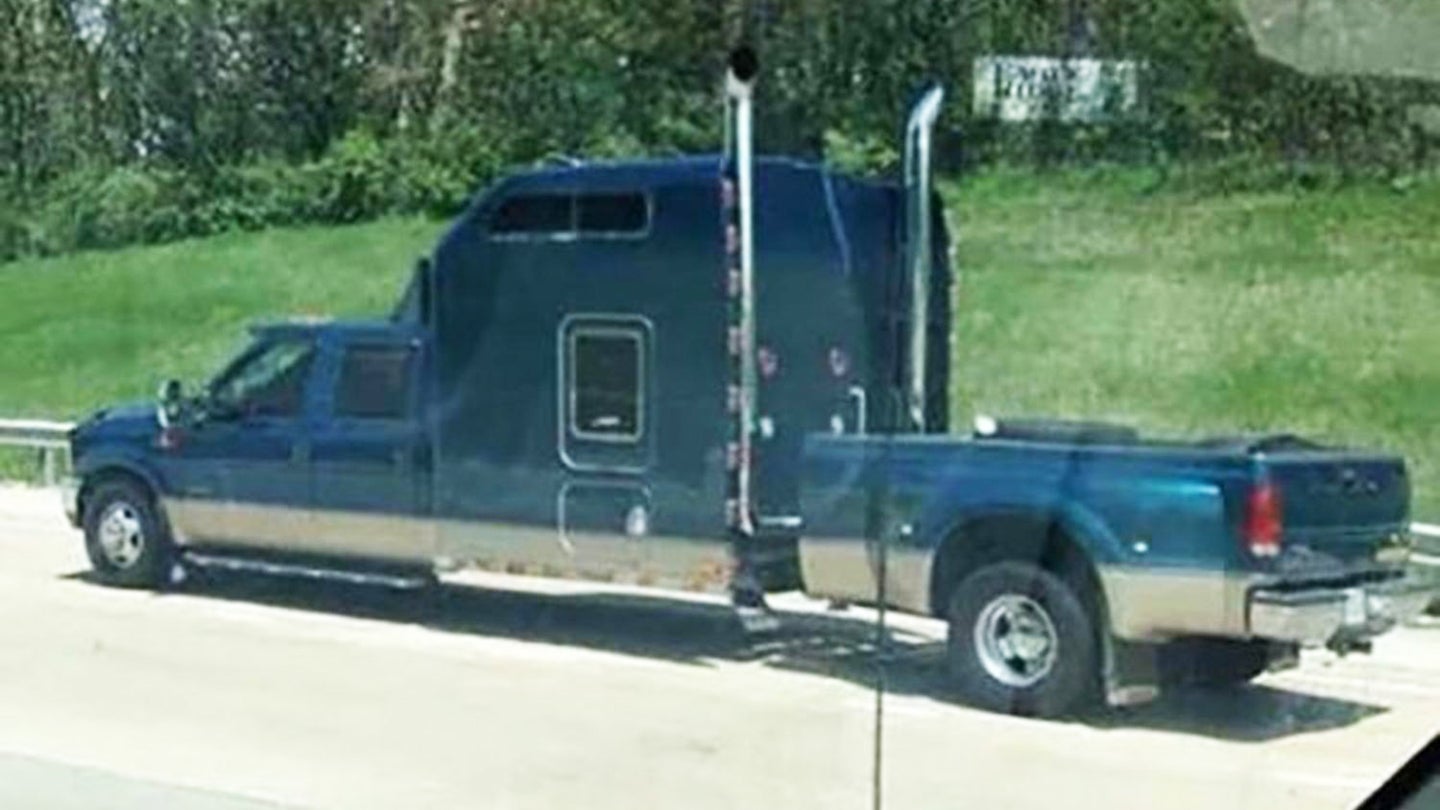 Fives years ago, a mysterious picture went viral on Reddit: a Ford Super Duty Pickup that had somehow been fused with a full-size sleeper cab from a semi-truck to create the ultimate long-haul rig. It looked surprisingly well done, with the sleeper section given a matching tan-and-green paint job to give it the appearance of an extremely obscure, special-order dealer option for hotshots. But details were scarce, and though it's been sighted a few times since, no one's been able to tell its story. Until now.

A video of the truck parked in a lot started going around Facebook last week, which prompted us to finally dig in and track down the builder with some good ol' fashioned sleuthing. Turns out it belongs to one Patrick Daughton of Illinois, who was gracious enough to answer a few questions about his baby. Daughton started work on the project in 2008 using his 2000 Ford F-350 as a base, saying he wanted to "go big or go home" with it.

Daughton said he made the trip from his home in Illinois to Four State Trucks in Joplin, Missouri, where he spent a week climbing in and out of various sleeper cabs before he found his holy grail. The Kenworth sleeper you see here was the largest one on the lot and took quite an effort to install. Every step of the project required cutting and fabrication to complete, which is no surprise since the F-350 was never intended to have a sleeper cab.

The initial build took 19 months to complete, which Daughton said involved stretching the Ford's frame by ten feet and eight inches. That resulted in a 23-foot wheelbase, which is nearly as long as a real semi. The two cabs open to each other; Daughton said that passengers can stand up from the front seat and walk all the way through to the sleeper.

The Super Duty's aesthetic is capped off with a pair of high-reaching exhaust stacks on the back of the sleeper. They're easily the funkiest part of this already over-the-top build, but least they're functional. Daughton says that the bed holds a 91-gallon auxiliary fuel tank, and notes that he gets somewhere around 12.5 mpg on the highway from the 7.3-liter Power Stroke diesel V8.

Whether you love it or hate it, this franken-truck has apparently been worth the effort from a financial standpoint. A recent appraisal yielded a value of between $80,000 and $100,000; adding a small sleeper cab to a pickup isn't uncommon in the world of hotshot delivery drivers, who like truckers have mandated rest periods built into their schedules and can reset the clock by using a DoT-approved sleeper berth instead of grabbing a cheap hotel.

But Daughton's not running thousand-mile deliveries in his giant Ford—he built it for himself, and he says he gets a kick out of showing it off more than anything else. At truck shows, he says his Ford gets more attention than any chromed-out semi on the lot, and he loves watching kids and adults marvel as they climb through it.