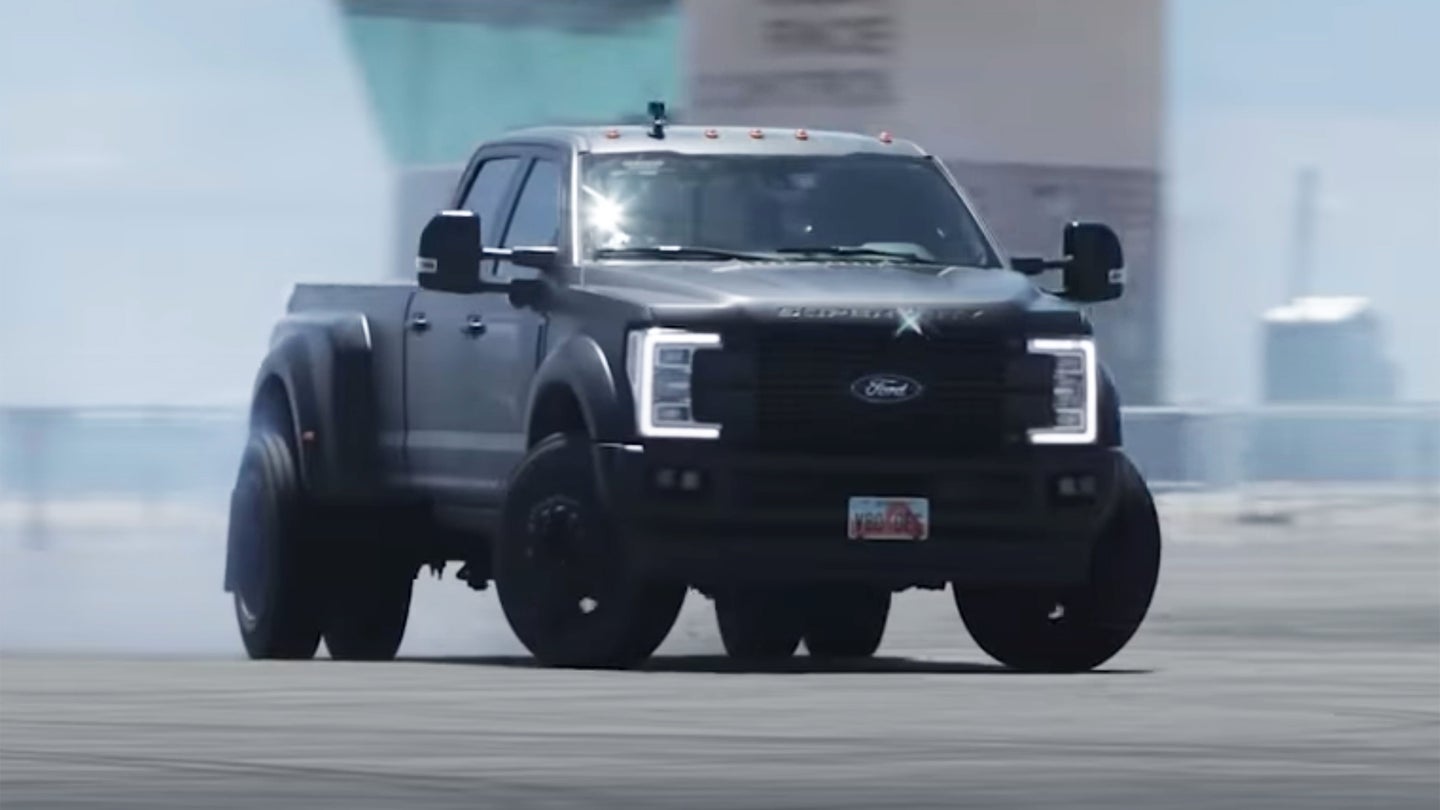 These days it's pretty easy to pick a wheelman for any conceivable test of "Is it possible to drift this machine?" That driver is, of course, Ken Block. After what seems like dozens of Gymkhana videos—a domain that now belongs to Travis Pastrana—he's trying his hand at sliding a stock 2019 Ford Super Duty F-450 dually. That's four rear tires to break loose, over 8,000 pounds of truck to control, and a 6.7-liter turbodiesel V8 that's definitely not built for this.

In the video, Block uses his F-450⁠—which is unmodified in order to pass emissions⁠—to tow his Mk2 Ford Escort drift car to the wide-open asphalt of Utah Motorsports Campus. There's some sort of plan to do a twin burnout with the car+trailer still attached to the pickup, which immediately goes awry when the Escort snaps an axle shaft. So, time to go drifting with the F-450 instead. The video is cued in to the right spot below to get to the action (it's at 6:02 if it doesn't play correctly).

At the very beginning, Block talks about trying to rig up a handbrake for the truck, so it's not the first time he's thought about it doing it. Although it weighs four tons and has a tremendous amount of rubber meeting the road, the F-450 looks entirely at ease sliding around in big, loping circles—at least, Block makes it look easy. The 450 horsepower and 935 lb-ft of torque from its PowerStroke turbodiesel V8 is no slouch, but it's built to generate tremendous amounts of power at low RPMs, not rev to the heavens and snap to attention.

As Block mentions afterward, the engine's turbo takes a long time to spool up and the smooth throttle response is naturally out of step with the demands of drifting. Getting a PowerStroke-equipped Super Duty to do this is not easy by any means, let alone the giant F-450. Third gear was the sweet spot, if anyone out there with Ford's $100,000 pickup wants to attempt the same feat. But I don't suggest that. If Block can barely do it, there's little hope for the average dope.