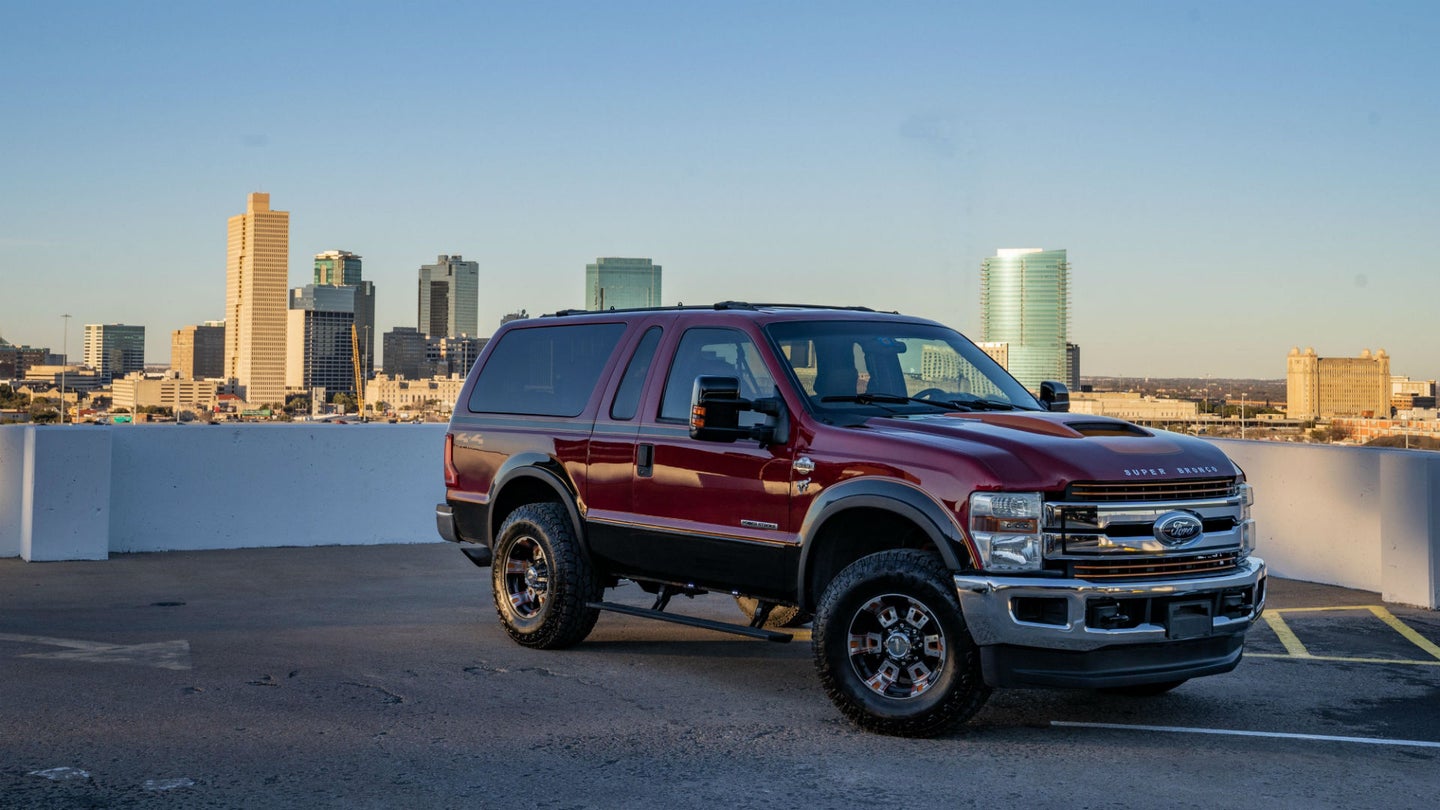 The Ford Bronco faithful among us have been waiting years for the Blue Oval to revive its iconic off-roader. In the two decades or so since the Bronco was last sold, some have even gone as far as building their own—though none are as impressive as this "Super Bronco" that combines parts from various F-250 pickups and an Excursion SUV. As you'd expect, the work that went into it is nothing short of astounding, especially when it comes to home-fabbed creations.

One Redditor recently explained to Jalopnik that his father, David Stockman of Weatherford, Texas, is the mastermind behind the project and posted an in-depth thread of how the Super Bronco came to life. In all, it took more than a little at-home ingenuity to fabricate their vision into reality. From sourcing parts across the country to purchasing one donor vehicle after another, it was a two-year process that amazingly resulted in a truck that looks like it came straight out of Dearborn.

The first step was locating a rolling chassis, which Stockman was able to track down from a local man known for parting out Ford Super Duties. An '05 F-250 crew cab frame was sourced and quickly cut up to accommodate the coming modifications, though its 6.0-liter Power Stroke diesel V8 was retained for the build. After some troubleshooting and a round of upgrades, the turbocharged lump was ready for work with an expected power rating of around 400 horsepower—while the torque figure is likely to double that.

An '01 Excursion was promptly found to donate its entire back half, including the rear frame and bodywork from the windshield aft. The original F-250's body was cut off behind the front doors, leaving a small space to be filled by parts from yet another scrapped truck. This time, an extended-cab F-250 gave up its rear suicide-style doors which Stockman then hacked up to not only be completely functional but look totally stock.

At this point, the bodywork had been successfully welded together and fitted atop the altered frame. In the meantime, Stockman also located a four-wheel-drive front axle from a 2012 F-250 as the base truck was only a two-wheel-drive pickup. After installing that, as well as an electronic rear locker from the same 2012 Ford, the rough edges were all there and ready for smoothing over.

Stockman's end-goal, of course, was to have a modern-looking Bronco. To achieve that, he then borrowed front-end components from a few different 2008-2010 F-250s and fabricated them to fit his off-roader. If you look closely, you'll also notice the front grille from a 2017 model. Mating all these different parts to create a cohesive front fascia required extensive work, but it all came together after a touch of welding a here, a bit of Bondo there, and some creative positioning.

Toward the back, the Excursion body's original taillights were removed in favor of 2017 F-150 units, though Stockman flipped them upside down for a stylistic flair. The tailgate couldn't be left alone either as it now wears the plating from a modern King Ranch truck with an inlaid light showing custom "SUPER BRONCO" lettering across it.

With everything smoothed over and in its place, Stockman completed the exterior—how else—by painting it himself. The finished product, at least in photos, looks great and you'd have no idea he isn't a professional body man...nor fabricator, nor mechanic...you get the picture.

The interior stood as the final step and it had to match the exterior's supreme fit-and-finish. Heated and cooled Lincoln MKX seats were acquired for the truck, then wrapped in like-new King Ranch leather that Stockman stumbled across online. The dash is from a 2017 Super Duty and its infotainment system is managed by a Samsung tablet, which is fitted to a custom-built wood mount. More of the beautiful cedar was utilized to create a new center console, and per Stockman's wishes, the rear seats are completely usable.

According to the Reddit post, Stockman has already driven his Super Bronco over 15,000 miles since completing it in late 2019. Understandably, it's a hit at local car shows as well as, y'know, the entire internet.

All of us plebs are probably better off waiting for the 2021 Bronco, but hats off to Stockman on compiling what's undoubtedly one of the best custom rigs to come out of the last decade. Who needs a coachbuilding company when you've got time and a heaping spoonful of dedication?