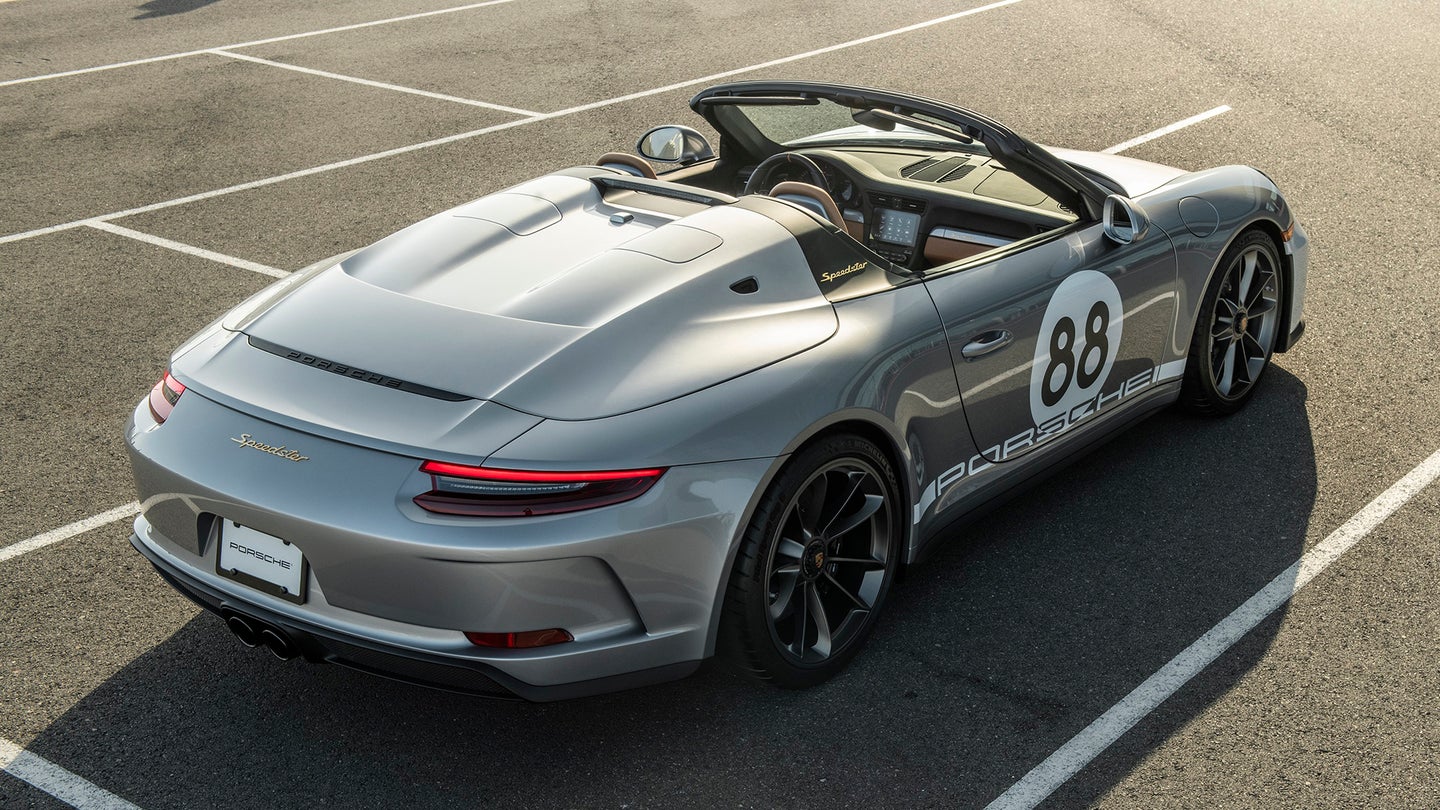 There's always some magic in the final example ever made of a now-extinct model, even something as dowdy as the dearly-departed Chevrolet Impala. But if our appreciation for The Last Car didn't do it for you, maybe this will: Porsche has decided to give the final 991-generation 911 a hero's send off in an online auction with the proceeds going to United Way's coronavirus relief efforts around the world. Now that's giving back.

Production of the 991 car, which ran from 2011 to 2019, wound down in December of last year as Porsche built the final 911 Speedsters. These are a far cry from the old lightweight 356 Speedsters that originated the name in the 1950s—essentially, the 991 version is a roofless, ruthless 911 GT3, borrowing the performance coupe's chassis and suspension upgrades, free-breathing 502-horsepower flat-six, and six-speed manual (the latter is mandatory). Lightweighting efforts like a few carbon fiber body panels, manual soft-top and a titanium exhaust mean the convertible Speedster only gained 115 pounds on the GT3, a fairly monumental achievement.

Revving to 9,000 RPM, that beaut of a six-cylinder engine could push the Speedster to 60 mph in under 3.8 seconds—remember, you're shifting the real way here—on its way to a vmax of 192 mph. Porsche motorsports tweaked everything from suspension rates to the rear-axle steering to compensate for the roofless construction, so handling compromises are nil. As you'd expect for a starting price of $275,750.

Porsche limited 991 Speedster production to 1,948 units, all of which sold quickly—except the final one, which Porsche kept for itself after the build was completed in December. As the last 911 built from the car's most important generation in decades, you'd probably expect it to end up in a prime display in Porsche's Museum or squirreled away in its internal collection, to be trotted out in another 50 years to remind kids that their cold fusion hover pods used to have a stick shift and a whole lot more personality. But the company's decided there's a much better use for it in this current moment of crisis: Raising money for charity.

"Not only does this mark the end of what, for me, was a special era but it’s especially rewarding that the last car to reach the end of the line should be the ultimate—the Speedster combined everything we learned and is the 991 in its purest form," said Dr. Frank-Steffen Walliser, VP for the 911 and 718 product lines. "I hope this really unique car can make a big difference to those who need help right now—and that the fortunate buyer enjoys it and drives it as we always intended."

This Speedster is also equipped with the Heritage Design package, which brings the gold-plated badging, number decals for the doors and frunk lid, GT Silver Metallic paint, high-gloss black brake calipers, and a color-matched gear pattern on the shift lever inside. Whoever buys this is getting far more than an extremely special car—it's being offered with a 911 Speedster Heritage Design Chronograph, a trip (eventually) to Germany to the Weissach development center and test track to meet the brains behind the car, and a commemorative book featuring an original sketch by Speedster designers.

RM Sotheby's is opening the online auction to U.S. residents beginning Wednesday, April 15 at 11:00am ET, and it'll run for one week without reserve. You can find more about how to bid at this link if you happen to be fabulously wealthy. For the rest of us, it'll be interesting to see how this Porsche performs on a much different—and more important—stage.

Who Needs Backseats When You Have a 2021 Porsche 911 Turbo S Lightweight Package?

Hopefully not you, because it don’t got ’em.