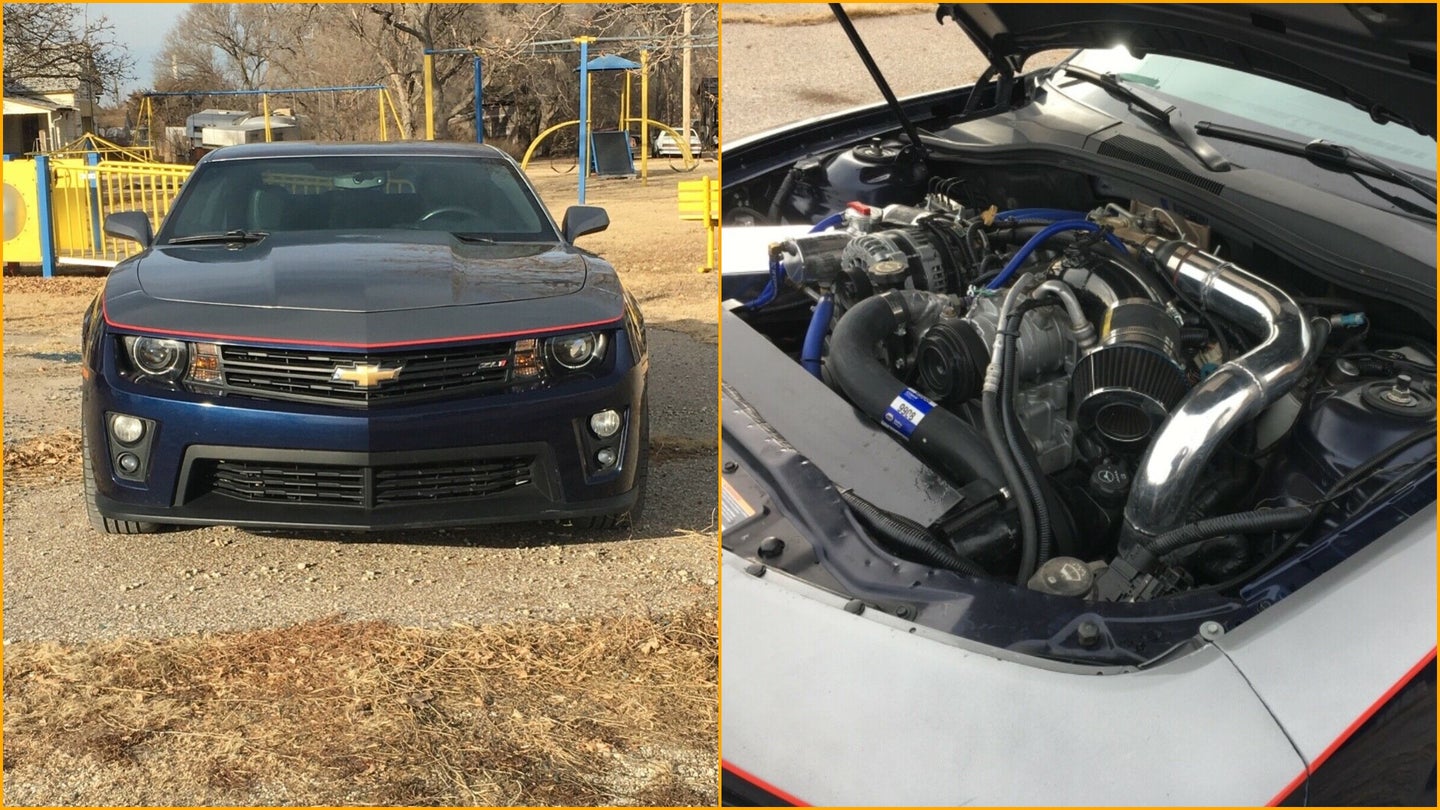 If what you're looking for is a solid amount of torque out of your engine-swap project, the obvious (and played-out) solution is a General Motors LS swap. But what if the torque offered by a 6.2-liter V8 isn't enough and you still find yourself wanting more pull and grunt? Easy, you look to diesel. Perhaps that's why a Duramax diesel V8 just ended up under the hood of a Chevrolet Camaro we just found on eBay going for a staggering $17,100 with two days left to go at the time of writing.

This fifth-generation Camaro started out as a 2011 SS model with a 6.2-liter L99 V8 engine up front, producing 400 horsepower and 410 pound-feet of torque. Presumably while using all those ponies, this Camaro was at some point crashed, destroying its hood, front bumper, right fender, and radiator support upon impact. While the seller says the unibody escaped damage, the Camaro was still stuck with a "rebuilt" title, meaning any residual value evaporated along with the coolant steaming from the radiator at the crash scene. With a perfectly good but worthless chassis, the owner did what we, the peanut gallery, would want them to do: Turn it into a project car with an over-the-top engine swap.

Cue in a 2010 Silverado 3500 HD. The truck's 6.6-liter Duramax LMM turbodiesel V8 and associated Allison automatic transmission fit the rear-drive Camaro almost like a glove, and as such, ancillaries such as air conditioning and remote start reportedly still work. A functional oil temperature gauge and traction control sadly didn't carry over from the Silverado, and the latter in particular would be of value in the Camaro because even though the new engine produces 35 horsepower less, its torque output of 660 pound-feet towers over that of even a 2020 Camaro ZL1 1LE.

The owner capped off their build with an adjustable coilover suspension, a ZL1 front clip, and ZL1 wheels. Since completing the swap, the owner says they've driven the car about 1,000 miles without any issues, averaging between 25 and 30 mpg the entire way. A photo of the digital dash supports this claim, showing an average of 26.0 mpg on the current tank.

While it's perfectly reasonable to worry about this Camaro's rebuilt title, the quality of workmanship involved in this swap sends a reassuring message about what shape its frame is in. If you aren't anxious about this Camaro twisting its frame like a pretzel at full throttle and want in on the action, then place your bid soon, because this Camaro's auction ends Sunday evening.

If for Some Reason You Need a 1,000-HP Yenko Chevy Camaro and No Roof, Probably Buy This