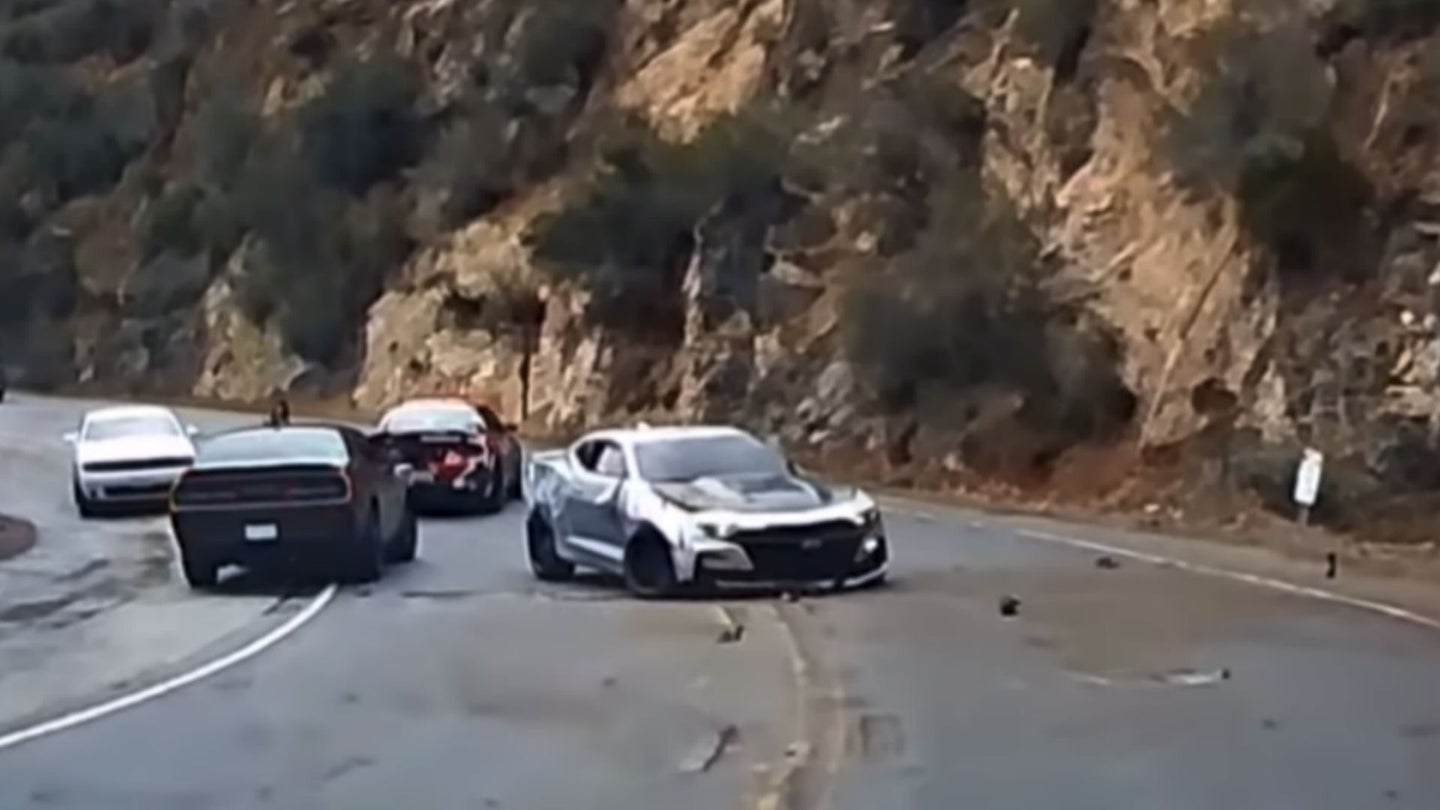 Day or night, rain or shine, groups of driving enthusiasts take to the canyon roads during the weekends. Sadly, stupidity usually isn't far behind. Earlier this month, a video surfaced of a Chevrolet Camaro receiving near-instant justice after getting caught doing donuts on the Angeles Crest Highway in Los Angeles, California.

The dashcam footage posted to YouTube shows the camera car taking a drive through the canyon roads of the Angeles National Forest, a prime maze of tarmac for driving clubs, automotive journalists, and commuters alike.

The driver happens upon one of Angeles Crest's largest and most frequented turnouts, currently populated by an American muscle and pony car group. A gray 2019+ Chevrolet Camaro is laying a fresh patch of rubber, dangerously sliding off the turnout and onto the road in the process. Because of this, the camera car is forced to pull over and wait for Camar-Bro to stop, as the only other option is to unsafely pass the frenzied Chevy on a blind left-hand turn and risk a head-on collision with oncoming traffic.

Sure enough, the Camaro drifts out of the turnout one too many times and nearly smashes into a Los Angeles County Sheriff's Department Search and Rescue truck rounding the bend. Because these units have to deal with cars going off the road on a surprisingly regular basis, the officer clearly isn't pleased with this close call and pulls over to give the offending driver a talking-to. The Camaro decides to make a run for it instead, discounting the fact that the lack of side roads means they have no choice but to head toward the cop-heavy town of La Canada Flintridge. This marks the start of the Angeles Crest Highway, where officers most likely already have the car's plates.

The driver doesn't even make it out of the canyons though and, minutes later, the camera car stumbles upon the fleeing Camaro in the middle of the road. Considering the wet pavement from recent rainfall, debris in the road, and damage to the Chevy's back right fender, the Camaro most likely took the turn too fast, understeered off the road before clipping the rock wall, and bounced back onto the road before coming to a halt.

It’s unclear whether the Camaro driver was arrested or if he or she was injured. The Drive reached out to the Los Angeles County Sheriff's Department for more information and will update the story when we hear back.

In the meantime, this is a textbook demonstration of how not to behave in the canyons.