The owner reports receiving "10,000 messages." All from "cry babies and tire kickers." 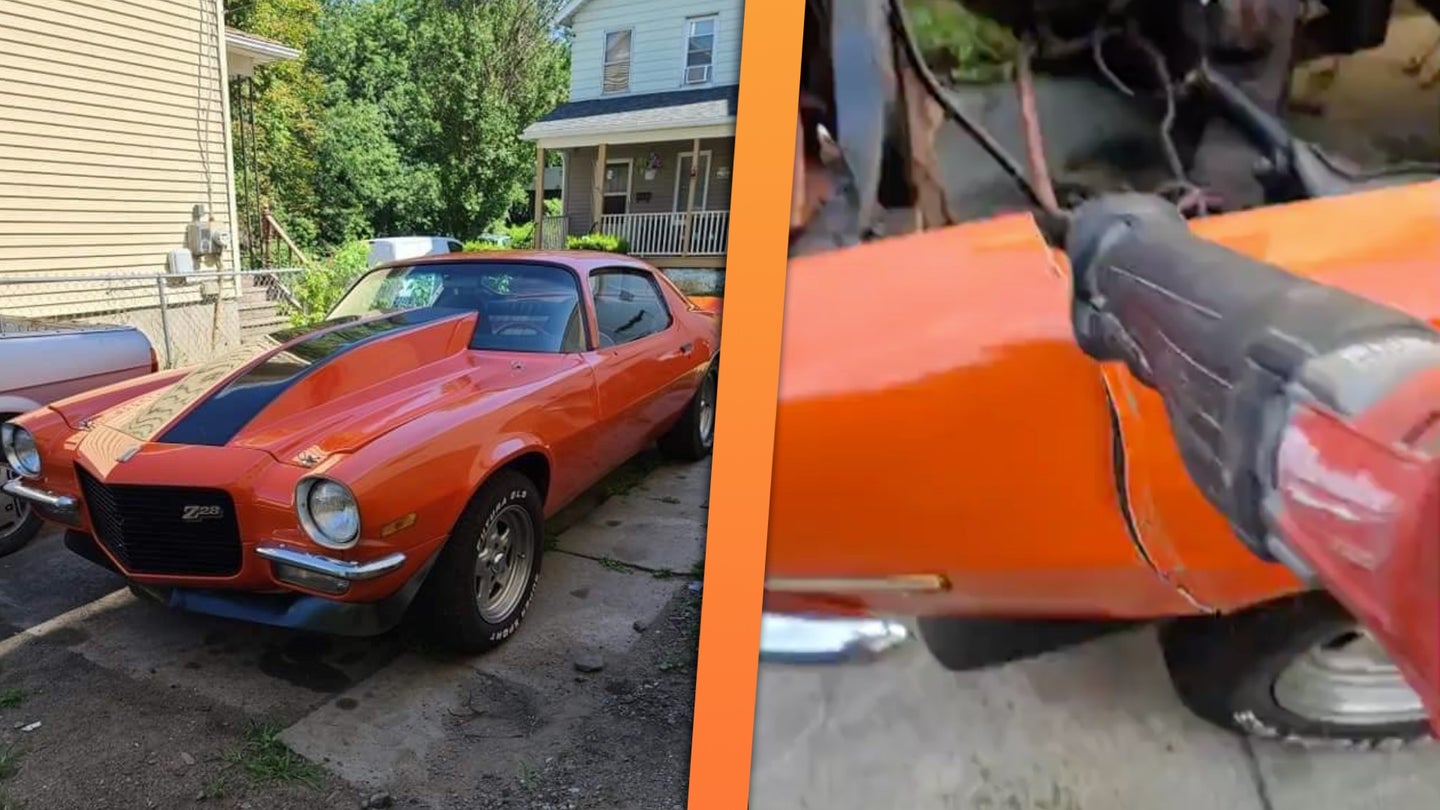 I've never experienced the joy of selling a car, unfortunately. So to be fair, I don't know how frustrating it can be. I'm also not sure how many tire kickers my Cobalt SS would bring to the yard if I wanted to sell it. What I do know, is that if my strategy to get rid of the thing wasn't going according to plan, I would most definitely not cut it into pieces with a reciprocating saw.

Not everyone is the same, though, especially a user from the Facebook group "Clapd Out," who goes by the name of "Jon Danger." After receiving what he claims to be too many messages from people pestering him about his 1972 Chevrolet Camaro's price, condition, etc., he decided that enough was enough.

He fired up a live stream, found a Sawzall, and got to work cutting his car into pieces.

The video is right around 40 minutes long and shows the fed-up individual slowly but surely cutting chunks off of his orange, split-fender Camaro. At one point in the video, he speaks to somebody off-camera, explaining the rationale behind his decision.

"Why am I going to sell it to somebody for nothing? I would rather cut it up. and take it to the junkyard and give it the f*** away."

He also inquires if the audience would like any parts from the vehicle as he tapes his phone to a nearby fence in order to film the whole affair.

"Nobody wants to spend no money, everyone wants to lowball, so everybody that's crying, 'oh, the Camaro!" he claims before jumping on the car's roof after a member of the audience suggests he do so. Truly a man of the people.

The video is pretty uneventful overall. It mostly consists of Mr. Danger slowly depleting a pile of Sawzall blades and batteries, further justifying his decision to cut up the car, and speaking to people off-camera. He makes it clear that if anyone wants the car for parts or scrap, they should come by his address in Scranton. He also makes it clear he will be keeping the nose of the car. So if you wanted that part, you're out of luck.

Is this the right thing to do when you're frustrated with selling your car? Well, it's certainly not the best thing to do. It's not really too heartbreaking to see a Camaro like this go, they made plenty of them. In fact, Danger makes another Facebook post claiming he has a second, '70s Camaro that he also plans to cut up because selling it will be too much of a hassle.

So while I suppose our friend Mr. Danger is just doing what he wants with his property, I think his frustration is probably getting the best of him.