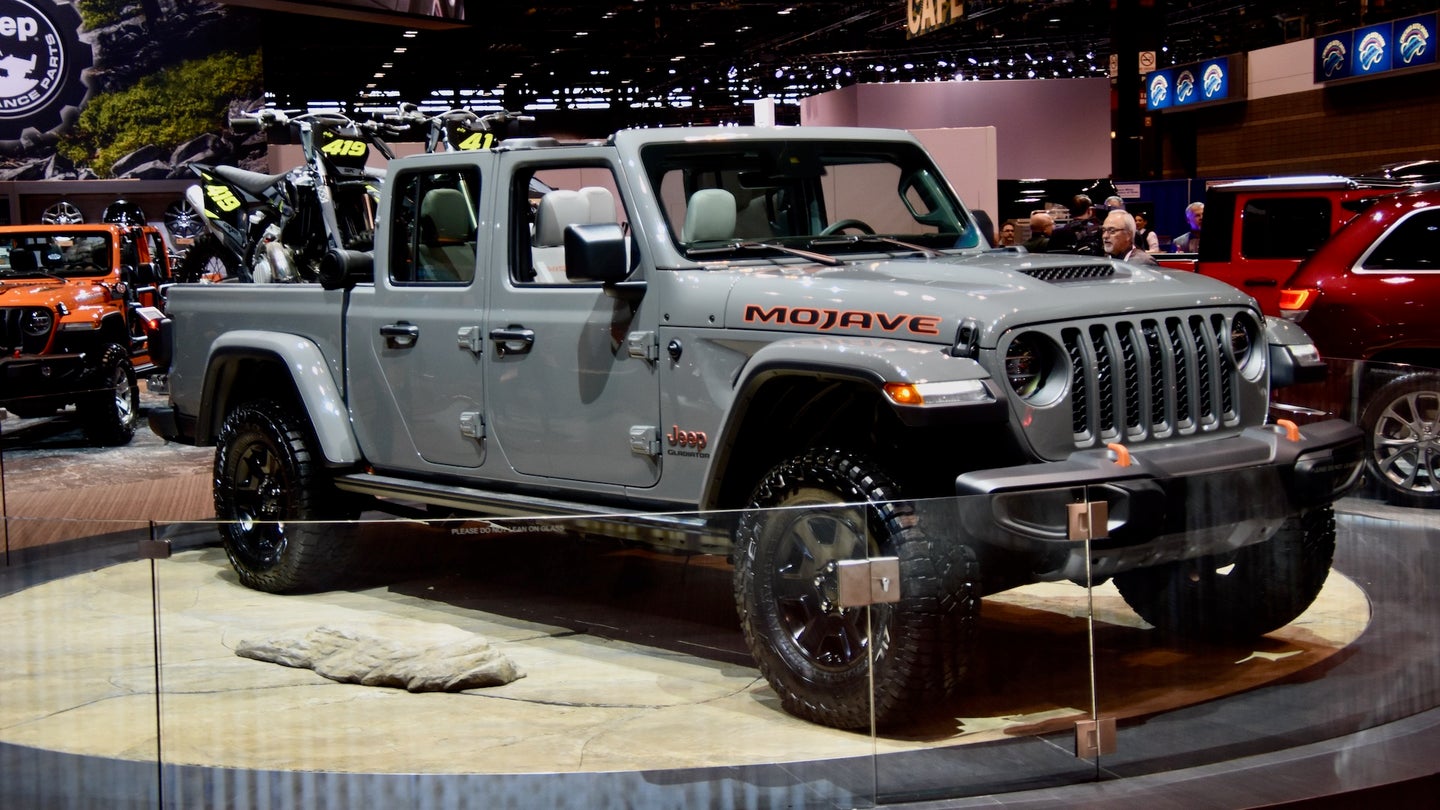 Eighteen years of Jeep's "Trail Rated" Wrangler Rubicon has made us intimate with what the designation means a Jeep can do. But what about the new "Desert Rated" badge, which Jeep introduced on the 2020 Gladiator Mojave at this year's Chicago Auto Show? To find out, we took a minute to talk to Jeep Gladiator Brand Manager Brandon Girmus on the show floor, and he helped clear up what Jeep promises by bestowing the Mojave name upon the Gladiator.

"You can think of Desert Rated as Trail Rated's cousin or twin brother," explained Girmus in an interview with The Drive. Like Trail Rated, he told us, Desert Rated is a moniker awarded to vehicles that fulfill five requirements for specialization in their respective environments.

"There is some crossover with Trail rating, so you've got maneuverability, ground clearance, traction—but the traction is more for like loose surfaces like sand, and then ride control and stability," he said. "The key thing is making sure that when you're flying fast through the desert over uneven terrain, the vehicle isn't kind of pitching and rolling all over the place, so that's where the Fox shocks and suspension help keep the vehicle controlled and level."

Girmus confirmed that despite a refocus on playing in the sandbox, Desert Rated models like the Gladiator Mojave will be no less at home on the trail than any other Jeep.

"You'd want a Desert Rated Jeep for the desert, but this can do phenomenally well on a trail too. It can still do the Rubicon [Trail], it can still manage 30 inches of water fording. It's gonna be very off-road capable in pretty much any trail situation."

Pricing hasn't been announced, but Girmus called our guess that the Mojave's place in the Gladiator range will be like that of the Rubicon's "a pretty fair assumption." He couldn't comment on whether the Mojave will be available with the Gladiator's new 3.0-liter EcoDiesel V6, or whether more Jeep models are slated to receive the Desert Rated designation, though the fact that Jeep devised a whole new testing methodology for the Desert Rated badge says to us that more like the Gladiator Mojave are coming.

"Trail rating's been around since 2004, and Jeep engineering has really perfected the Trail rating process over the last 16 years. They've developed this whole test strategy; the vehicle's gotta go out, it’s gotta do X, Y, and Z, and they've got a scoring system. That same engineering team, over the last couple years, has also developed the Desert rating system. They also developed a brand-new desert off-road durability course too, out at our Arizona proving grounds."

"Any future Desert Rated vehicles we do would also have to perform there."

It even has Levi’s denim seats.