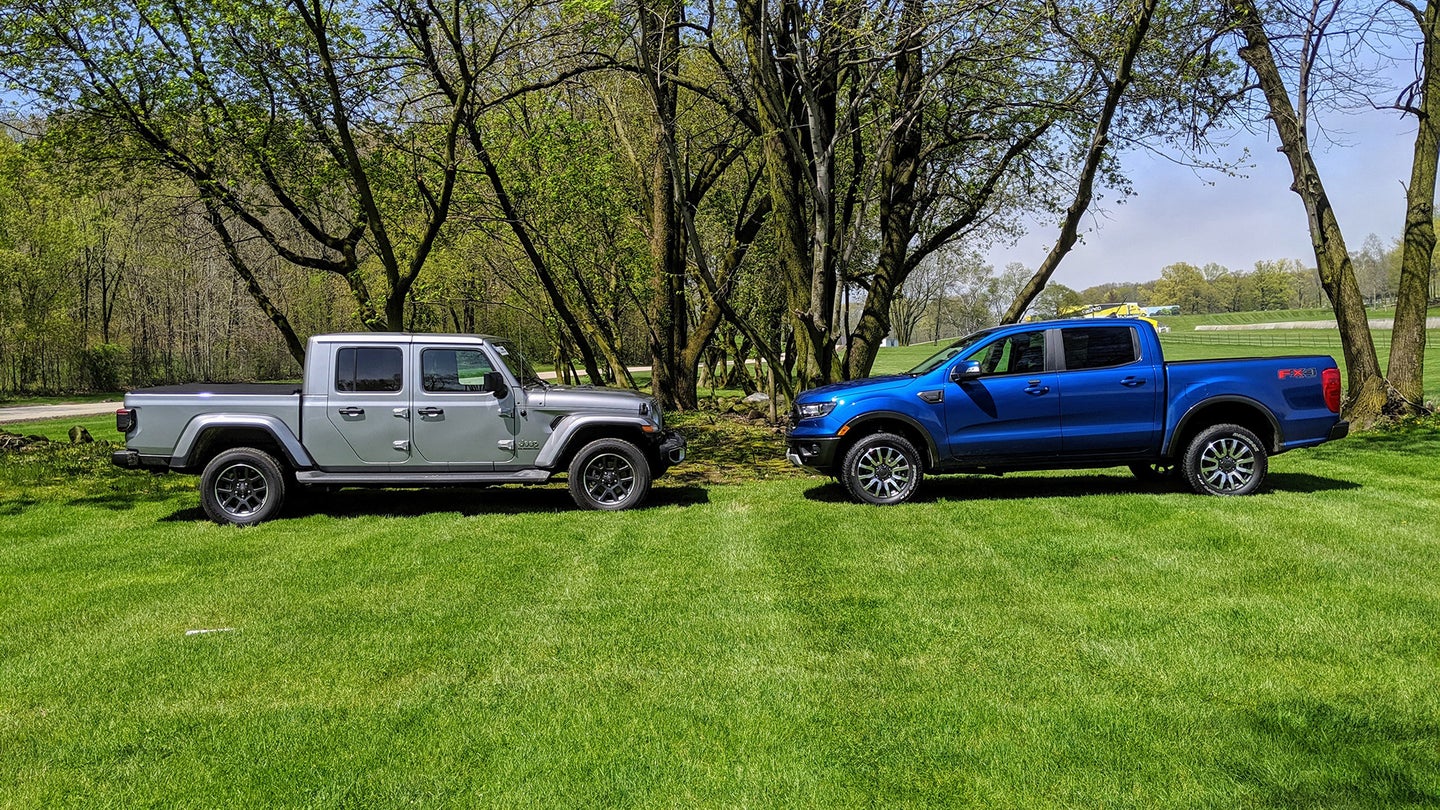 The inside-No.-4-Reactor-at-Chernobyl-hot midsize truck market in the U.S. welcomes two new entries this year: The all-new 2020 Jeep Gladiator, and the new-to-America 2019 Ford Ranger. Each truck has has its own established fanbase, but there's a whole crop of fresh buyers out there who are looking at them with virgin eyes, trying to figure out which fits their active lifestyle best.

If you're in the latter camp—hell, even if you think you've heard everything about either truck—it's useful to look at exactly how the two diverge in their approaches to a simple formula: Engine, cabin, and bed. Both have their pros and cons, and it's not quite as clear cut as you'd think. If bash-your-fenders off-roading is your focus, the Gladiator is obviously the way to go. But if you just want to drive some fun trails now and then, a Ford Ranger with the FX4 off-road package, bash plate, and Trail Control could be a great alternative that's a bit softer for everyday life.

So without ado, here are the top five differences between the Jeep Gladiator and Ford Ranger. Apart from the fact that the Gladiator is a convertible, of course, which kind of feels like a gimme.

Like the Jeep Wrangler, every Jeep Gladiator is four-wheel drive, so it has a bit more capability than the Ranger baked into the standard price. But adding to that off-road prowess is a Dana 44 front and rear axle, the front version of which is only found on the Wrangler Rubicon. This heavy-duty axle helps the Gladiator push through all manner of inhospitable terrain and gives it that incredible front-wheel articulation; what a solid front axle doesn't do is improve driving dynamics.

Steering feel through the old-school recirculating ball setup (a modern rack-and-pinion rig doesn't jive with a solid axle) can be generously described as vague, and it's a chore to keep the thing pointed straight on the highway depending on wind and road conditions. Most people don't need the off-road benefits solid axle and would be happier with the Ranger as a daily driver from a dynamics standpoint.

The Jeep Gladiator has a tried-and-true Pentastar 3.6-liter V6 mated to a ZF-sourced eight-speed automatic transmission. It's a solid setup that should be generally reliable, if mostly uninteresting. But over in the Ford camp, they've embraced both turbocharging and additional forward gears. The Ranger has a 2.3-liter EcoBoost four-cylinder (270 horsepower, 310 pound-feet of torque) paired to a 10-speed automatic, which is the highest gear count in the midsize pickup class. Calibration is solid, and the transmission swaps cogs rapidly to keep you in the power band and the truck feels quick on its feet as a result. It's just more fun to drive—unless, of course, you prefer a manual transmission. Ford doesn't offer it, while you can row your own on all Gladiator trim levels.

Jeep Gladiator Has UConnect, One of the Best Systems Out There

Ford's latest version of SYNC is miles better than it ever has been, with full support for Android Auto and Apple Car Play. But Jeep's UConnect system remains best-in-class, and honestly one of the best in the industry. It supports the phone connections for those who want to use Car Play and Android Auto, including dedicated USB-C ports, but it also has advanced features for satellite radio. Most importantly, the touchscreen has a lightning-quick response time. In the Gladiator (like the Wrangler and other off-road Jeeps), UConnect features the always-fun Off-Road Pages to show you pitch roll, accessory gauges, the optional front-facing trail camera, and other fun extras. Gladiators equipped with navigation will also record the path taken during your off-road excursion so you can easily find it again in the future.

The Gladiator has overall more volume in the cab, but the Ranger's 43.1-inches of legroom up front for the driver is better than the 41.2-inches on the Gladiator. Combined with its flat dash and flat windscreen, the Jeep just feels smaller up front. If you're coming from a Wrangler you're likely used to it and it won't bother you. But if you're coming from anything else, you might feel cramped. It also doesn't hurt (literally) that Ford continues to make some of the most comfortable front seats in the business.

Jeep Gladiator is Getting a Diesel

We mentioned earlier that the Jeep Gladiator currently only has one engine available, but we are expecting a 3.0-liter EcoDiesel to become available in Gladiator, tuned to dump out 442 pound-feet through the eight-speed automatic. If torque is your thing, you'll want to wait around. Meanwhile, the Ford Ranger's four-cylinder will likely stick around as the only option until the next generation truck debuts next decade.

The Jeep Gladiator already boasts a best-in-class tow rating of 7,650 pounds in its Sport configuration, and the company has said that they do not expect the diesel version of the truck to have a higher tow rating than the V6 gas engine currently available. But it should make the Gladiator more of a beast off-road.