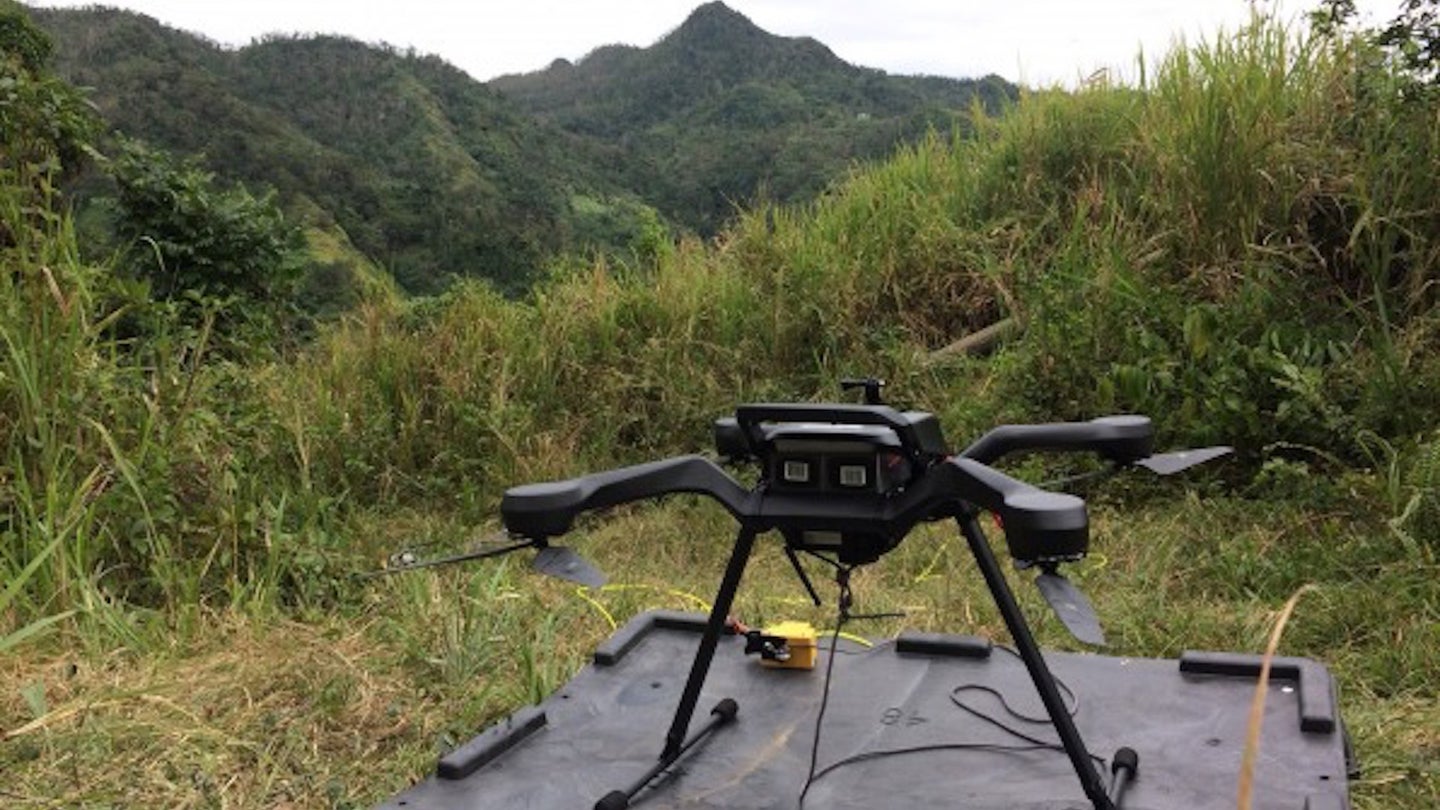 The mountainous area of Ponce, Puerto Rico has posed quite the challenge for local officials attempting to restore power in the aftermath of Hurricane Maria. The storm left residents powerless for four months, and while efforts by companies such as AT&T have been made elsewhere on the island, this particular region has been an uphill battle. Cabling power lines through the thick woodlands is difficult for boots on the ground, but Duke Energy began approaching the challenge from an aerial perspective in January. The energy company is now using unmanned aerial vehicles to traverse the more than 1,000 feet gorges of Ponce, and string vital power lines across in order to return power back to the area.

According to Fast Company, Duke Energy simply rigs a drone with a lightweight nylon cord and a 3-D printed magnet. Once the UAV covers its assigned ground and is in position, it releases the cord, allowing for workers on the ground to fasten a more durable cord in place. Finally, the conductor wire required to transmit electricity is pulled into position, and power can once again flow freely along its route. Essentially, this is the same exact process we’ve seen across the Atlantic when a Welsh village entrenched in a heavily forested region used drones to set up broadband internet. It seems that companies and governments all over are realizing how practical these aerial, functional tools of ours really are when confronted with seemingly unsolvable problems like these.

Let's take a look at the work in process, shall we?

Duke Energy had reportedly been using helicopters in scenarios like the one in the Facebook post until a pilot died on the job in 2017. Drones, unmanned and removed as they are, rid users and companies of that risk entirely. “The question was raised, is there another way to do this?” said the Manager of Unmanned Aerial Systems at Duke Energy, Jacob Velky.

When the company arrived in Puerto Rico last month, workers spent six days in Ponce, piloting power line-cabling drones all over the region. “We were doing upwards of 3-4 pulls in a day,” Velky said. “There was no shortage of work.” One of these pulls successfully strung up a power line across 1,200 feet, a significant increase from Duke Energy’s previous drone-infused method which involved shooting a projectile attached to the nylon cord.

Naturally, the UAVs here are also a huge help when it comes to surveying the region and find the demolished poles and other important infrastructure relevant to the job. “Being in the jungle, once the conductor is off and you just have a wooden pole out in the tress, it’s very difficult to see where the pole is,” Velky explained. “So using the drone to do reconnaissance instead of somebody going out there and walking around trying to find it just minimized the amount of time that employees are off a road.”

Before Duke Energy set up shop on the island in January, power in Ponce was restored for 68 percent of the local population. A mere month later, due to this creative, practical use of drones, that number is at 94 percent. It’s as clear as can be, at least in this particular instance, that drones can be the most useful tool for problems hitherto irreconcilable. Of course, authorities would’ve found another way, were we in a world where UAVs were still exorbitantly costly and not sophisticated enough. Fortunately for us, and the Puerto Ricans in desperate need of help, we live in another world entirely, where drones are saving lives.