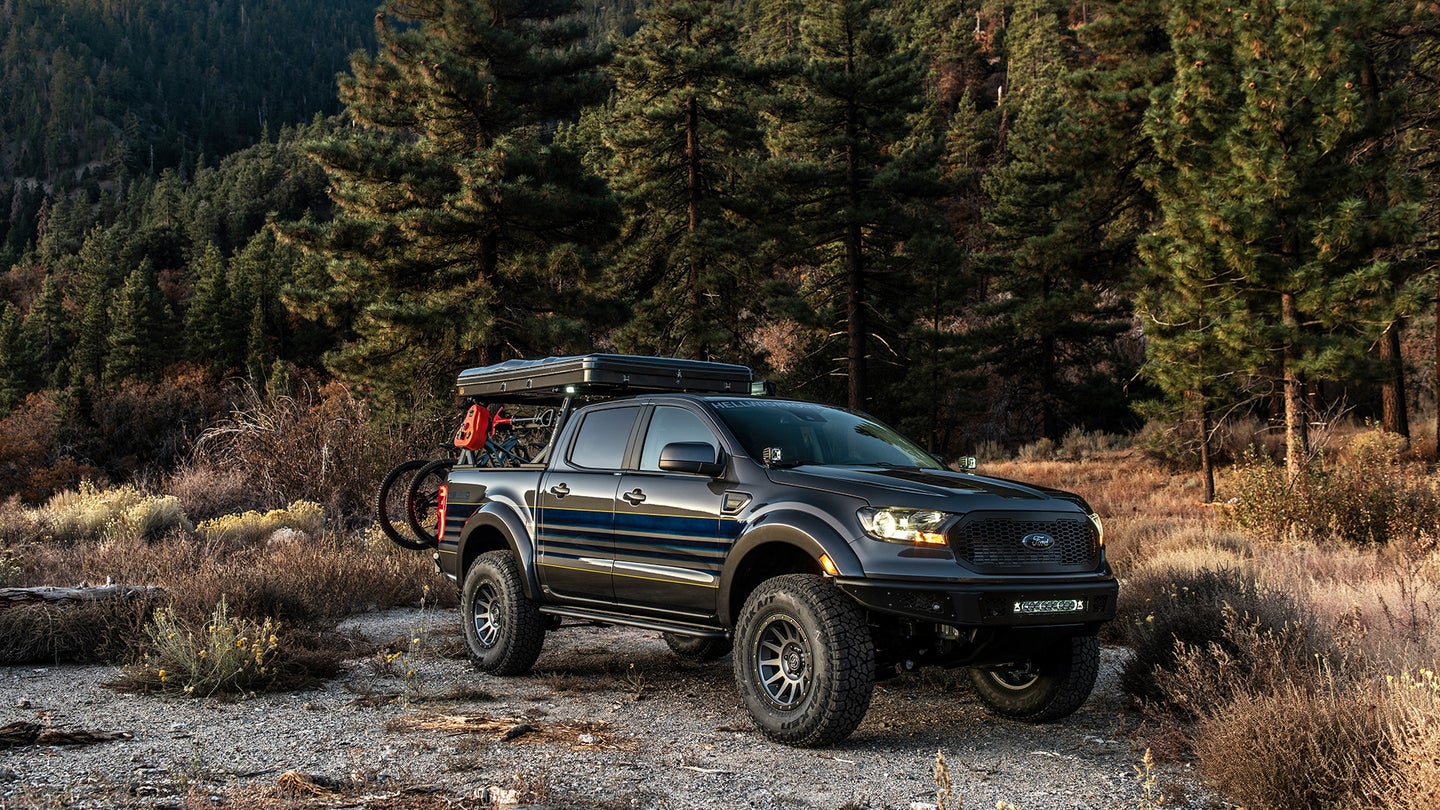 If there's one thing that SEMA 2019 has made clear so far, it's that the automotive world is continuing its obsession with overlanding into the new decade. One particular outfit is gearing up to offer its customers the ability to have an "Attainable Adventure" with its latest upfit for the 2019 Ford Ranger XLT.

The folks at Hellwig Products, a family-owned automotive company based in California, brought the Attainable Adventure Ranger build with them to Las Vegas this week where it sits on display for SEMA attendees to lust after. From an aggressive stance to a full array of go-anywhere and survival gear, this truck is enough vehicle for practically any off-the-grid getaway.

To give the Ford its sporty look, Hellwig sent the pickup to another California-based company: Old Steel Fabrication. Under Old Steel's watchful eye, the Ranger was equipped with a mild, yet capable lift using an Icon Vehicle Dynamics Stage 5 suspension system. A Yakima bed rack and awning were then fitted to the truck's bed and a Tepui Hybox rooftop tent makes the mid-sized adventurer a home-on-wheels.

Next, the builders focused on ensuring that the Ranger wouldn't have problems navigating rough terrain. A set of 17-inch Icon wheels were added to the build and wrapped in beefy 35-inch Falken Wildpeak tires. To make up for the added width, the truck features a set of Bushwacker fender flares that provide adequate coverage over the mounds of rolling rubber on each wheel. Custom bumpers by Addictive Desert Designs were fitted to the front and rear, as well as a T-Rex X-Metal Grille and Rigid Industries light bar.

An overlanding truck isn't just about getting somewhere off the beaten path, it's also about what you do when you get there. A shelved drawer system was installed to make access to the bed-mounted Trail Kitchen and refrigerator simple and effective.

Additionally, a RIGD hitch swing is used to extend the vehicle's mounting capabilities beyond the base footprint of the truck, including the mounting of two Specalized electric mountain bikes. When riders deplete the built-in charge of between 60 and 80 miles, they can return to the vehicle to utilize the GoalZero Yeti 1400 power station and installed solar panels to recharge the bicycles' internal batteries.

While no prices are immediately available, all of this gear doesn't come cheap. Some quick math adds up to at least $25,000 in extras, meaning it's possible for the Hellwig project to double the Ranger XLT's $28,000 base price tag. Still, given the opportunity for a beautifully equipped pickup with modern styling and plentiful amenities, this is a truck that many people would consider building in a heartbeat.