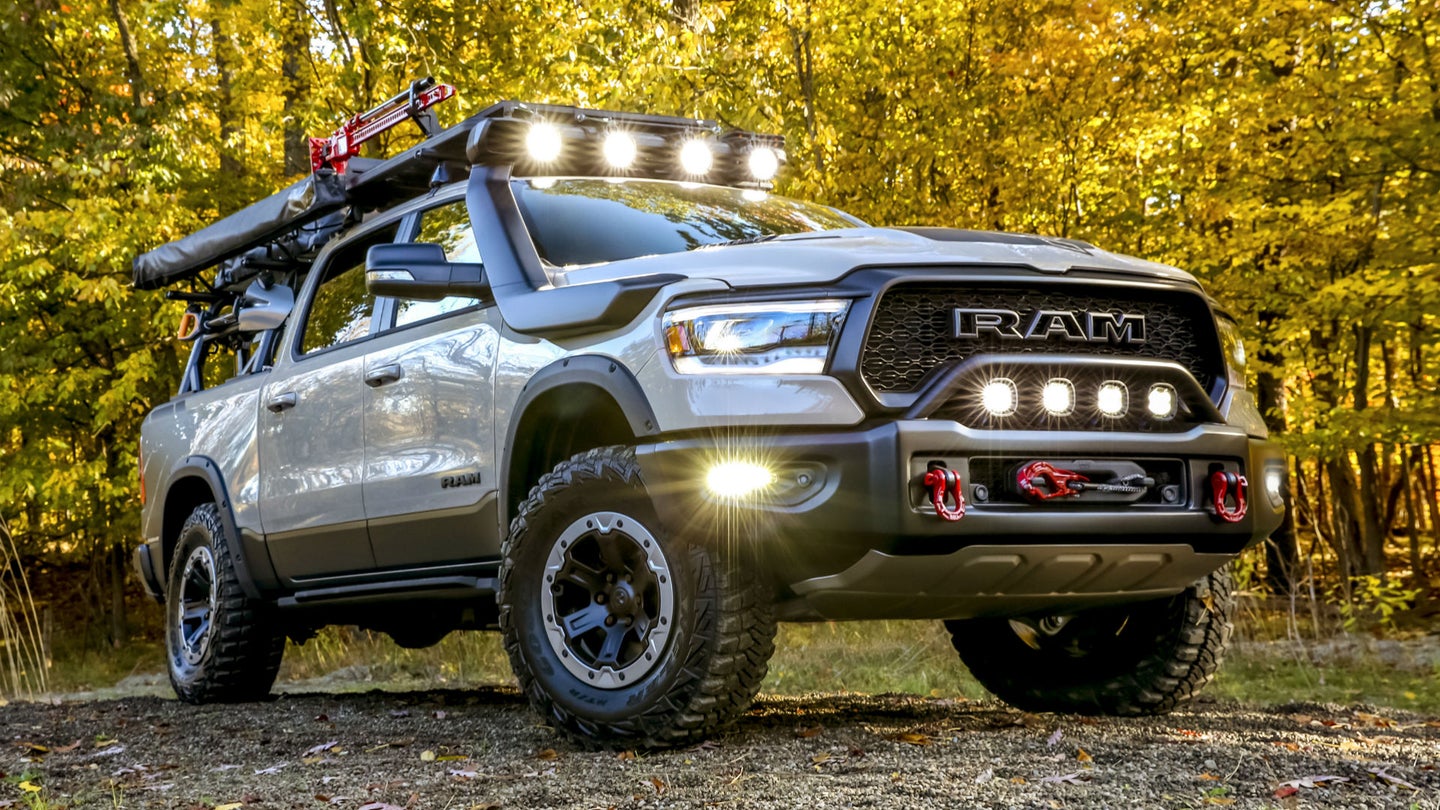 Ahead of next week's highly hyped SEMA show in Las Vegas, automakers are unveiling their specially built creations to show off the best in vehicle customization, from performance cars to off-road stars. Fiat-Chrysler is the latest to reveal its high-spec concepts, and it's taken a comprehensive approach by working with Mopar to build an overland-ready Ram 1500 Rebel as well as a style-centric 1968 Dodge D200 that's more than just a pretty face.

First is the Ram 1500 Rebel OTG (Off The Grid) Concept, which takes Ram's most off-road-capable half-ton model and equips it with all the necessary gear to live remotely for days on end. The truck which it's based on is fitted with the third-generation 3.0-liter EcoDiesel V6, which thanks to its 33-gallon tank can travel over 1,000 miles between fill-ups. It also provides 480 pound-feet of torque that kicks in at low revs to help with traversing tricky terrain.

The Rebel OTG's exterior is where you'll find the modifications, though, as it's had a lengthy list of gear added to make it both more adept and convenient when unplugging from workaday life. A concept two-inch suspension lift gives extra clearance for the 35-inch Goodyear tires, which are mounted to beadlock wheels. A snorkel intake improves its water-fording ability, while rock rails give extra protection to the truck's doors and rocker panels. All of this will help with going further in the wilderness, but should the pickup get stuck on an obstacle, it's also got a Mopar concept front bumper with an integrated winch; a one-off rear bumper based on a Ram 1500 Tradesman unit provides a better departure angle as well.

Then, out back, the Ram's bed features a rack system that supports a collapsible rooftop tent and retractable 270-degree awning. A robust solar panel system powers onboard accessories and, inside the 6.5-foot box, there's a battery-powered cooler and kitchen unit with a gas stove. This is all stowed away courtesy of a bed drawer system which allows for maximum usable space—a must when packing for multiple days in the outdoors.

Mopar's second in-house show truck is on the other end of the spectrum, with its Candied Delmonico Red and Dairy Cream two-tone paint and aesthetically focused demeanor. Based on a 1968 Dodge D200 heavy-duty, the Mopar Lowliner Concept is a lowered pickup that's been extensively fabricated to achieve the perfect blend of style and performance. It meshes old-school design with modern diesel power, thanks to its 5.9-liter Cummins engine that's paired to a six-speed manual transmission.

Additionally, it's had its front axle moved three inches forward on the frame to achieve better proportions. This is the type of ethos that can be found throughout the Lowliner, from its C-channeled rear to its custom air suspension. Twenty-two-inch wheels pull together the muscular look, and bespoke touches such as a shaved antenna, door handles, fuel filler cap, and badging are reminiscent of the '60s car scene.

Finally, custom-stitched Blazing Saddle Tan leather adorns the interior and is complemented by a Mopar-designed gauge pack on the dash. Other hot rod cues can be found on the translucent metal-flake shift ball and original 1968 steering wheel that's been finished in the aforementioned Dairy Cream paint.

Look to see both of these pickups make their debut on the SEMA show floor as the event runs from Nov. 5 through Nov. 8.