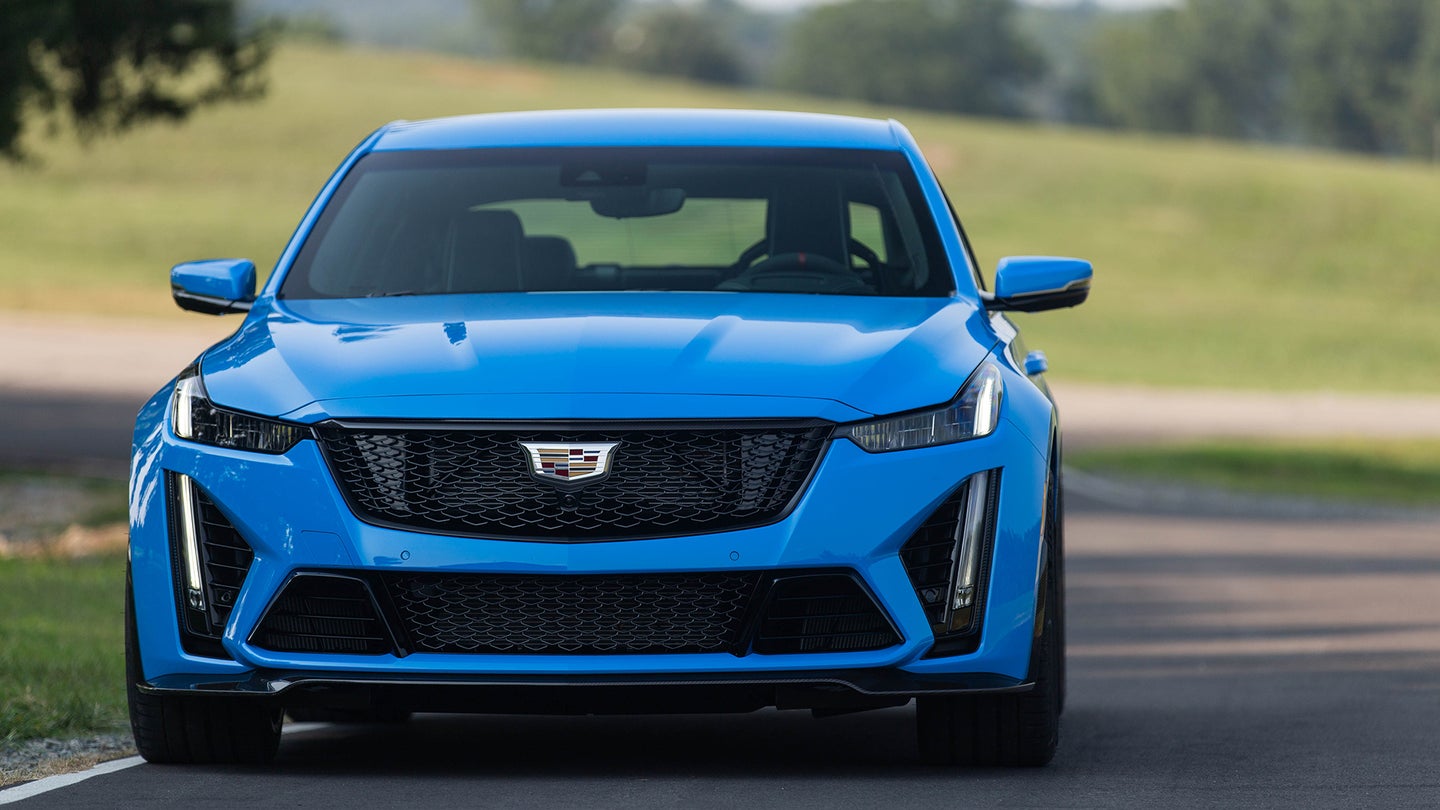 At the heart of the 2022 Cadillac CT5-V Blackwing is something familiar: General Motors' screaming 6.2-liter, supercharged LT4 V8. It's the unit found in the outgoing Cadillac CTS-V as well as the C7-generation Corvette Z06. And Cadillac's engineers, eager not to repeat any of the overheating issues that plagued the Corvette, took painstaking measures in optimizing the new car's aerodynamics and cooling.

If you'll so kindly remember, C7 Z06 owners hit GM with a lawsuit in 2017 that alleged "defective cooling systems" caused the cars to go into limp mode after 15 minutes of track driving. A month later, Chevrolet announced a fix that included "a new hood with improved cooling vents and some other changes 'for additional cooling on the track.'" But then, in 2018, owners brought yet another cooling-related class-action lawsuit against GM and claimed the car's 2017 redesign did not correct the problem. Messy stuff all around.

Obviously, Cadillac wants no part in that.

"The Z06 did not have any side outboard coolers when it launched," Mirza Grebovic, Cadillac's performance variant manager, told me during the car's media preview. "The one advantage we have with a sedan with a bigger fascia that's not as sporty is we have a lot of room to package extra coolers and heat exchangers."

If you look at the CT5-V Blackwing's face, it's almost all grille and radiators. First and most obviously, there is the center grille, behind which lurks a big radiator. This is where the main cooling happens. To maximize the airflow coming in through the front of the car—and make sure none of the precious stuff escapes—the car's designers and engineers sealed the sides of that center grille to help contain the air and force it straight into the radiators, Cadillac aerodynamics performance engineer Scott Sier said.

You can see it in the photo above. I'm pointing at it!

That approach can also be found in the side grilles beneath the headlights because there are two additional radiators there as well. Looking at the CT5-V Blackwing's face, it's interesting to observe all the sealed areas hiding behind the mesh grille; if you weren't looking for them, you wouldn't know they were there at all.

At this, Chris Mikalauskas, a Cadillac lead creative designer, jumped in. "From a design intent, we didn't want it to look like it was just blocked off," he explained. But the mesh itself isn't just for show, it's functional, too: if you look downward at the grille design, the valley of each grille "cell" has structural ribs that speed up the flow of air into the engine bay.

But that's not all. "We realized there's an area of the radiator that gets no air because you have the bumper beam in the way," Grebovic said. "So we spent a lot of time on optimizing these surfaces so that the air comes and flows to the entire area of the radiator."

The bumper beam's been machined to be as thin as possible and the foam underneath (for collisions) has a wing-like shape to it so it "kicks up the air and hits the radiator behind the blocked-off area," Grebovic said. It's pretty typical for a front bumper to function as both a safety and an aerodynamic device, but it's cool in this case because of all the little things Cadillac's designers did to optimize the CT5-V Blackwing's breathing.

Also packed into the facia—below the center grille and the bumper beam—are ducts that channel air to cool the brakes. I didn't even realize this part of the front was a duct. "Everything is organized in a way that separates the different functions—brake coolers, auxiliary coolers," Mikalauskas said.

But what is new, according to Grebovic, is that they increased the size of the aluminum supercharger lid to allow air to move more efficiently through the radiators.

Openings beneath the car, as well as functional fender vents behind the front wheels, channel out the hot air and relieve the pressure that builds up both beneath the car and in the engine bay itself.

Whether or not Grebovic, Mikalauskas, and Sier's work will pay off in customer hands isn't immediately clear, but I can tell you this: The CT5-V Blackwing's media preview days were something of a torture test in and of themselves. With outside temperatures ranging in the mid-90s the entire time, the Cadillac team let a bunch of pigheaded journalists go wild on track at VIR. This included hot laps, lead-follow laps, open-track sessions, and lots of idling in baking, humid Virginia summer heat.

These were cars none of us had ever driven before. Were there missed shifts? It's more than likely. But nothing overheated. Nothing went into limp mode. No dashboard lights came on when they weren't supposed to. Guess all those extra holes made a hell of a difference.