After three generations, the CTS-V name is set to depart with this 640-hp wonder. The next super-Caddy will likely be even better...but will something be lost? 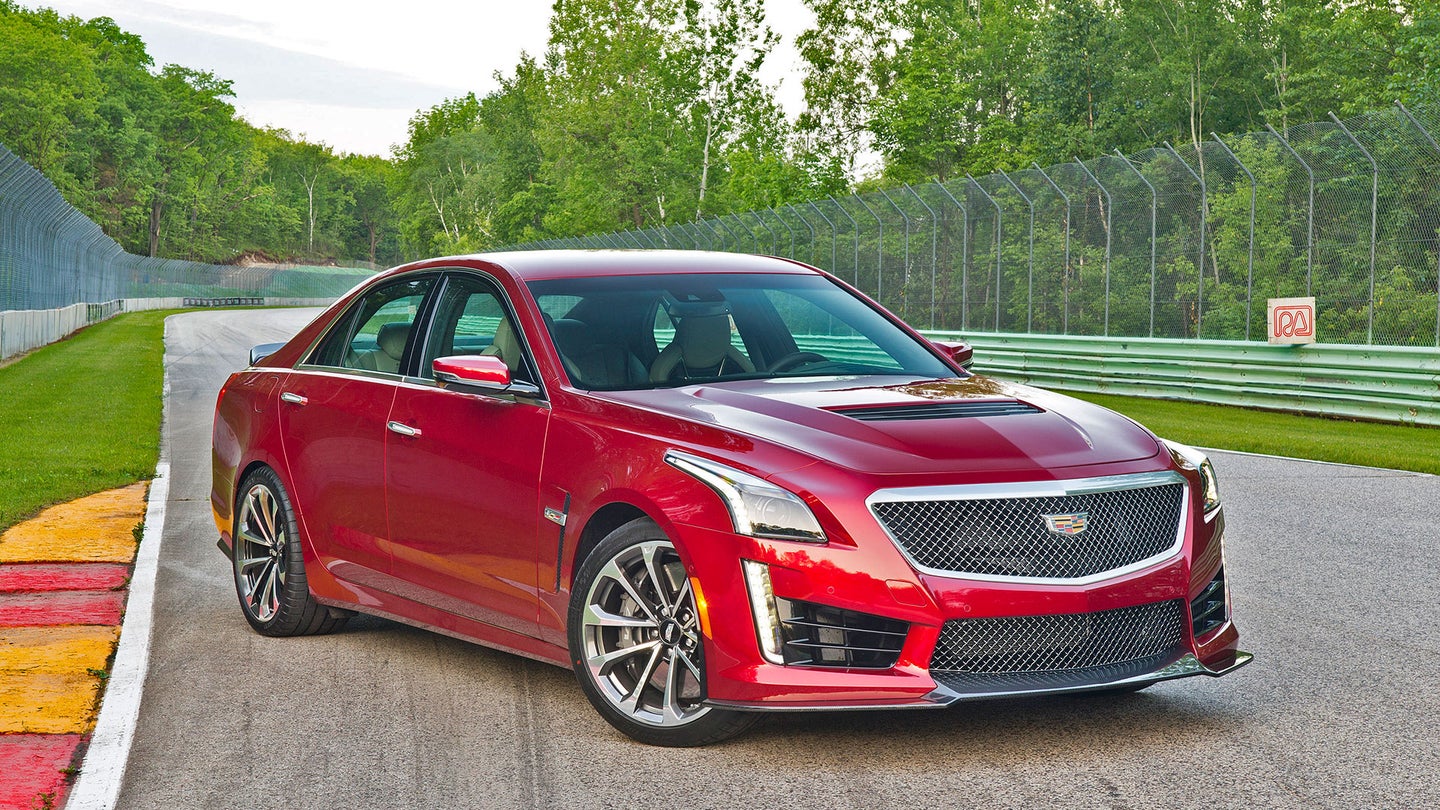 This may well be the last story I'll ever write about the Cadillac CTS-V.

After all, 2019 marks the last year of production for Cadillac's V8-powered sport sedan. It's sure to be replaced, but much about that vehicle remains a mystery. We do know, though, that the car's successor will wear a different name; CT5-V seems most likely, but considering Cadillac's apparently difficulty settling on branding and marketing strategies, it could be called CTV-V or Elmiraj-V or pretty much anything other than CTS-V. It may still be powered by a supercharged smallblock, as one snippet of audio from an internal video appears to suggest; then again, it may pack a twin-turbo DOHC V8 related to the one found in the CT6-V or mid-engined Corvette. It may show up later this year, a few months after the regular Cadillac CT5 debuts at the New York Auto Show; then again, it may show up in 2020, or even 2021 for all we know.

Regardless of form, face, or name, that new Caddy will surely be fast and furious; the perpetual march of automotive performance all but guarantees it. Still, something undefinable, slight though it may be, will be lost with the new model. Names do have power, after all, and for the last 15 years, CTS-V has come to stand for the pinnacle of the American sport sedan. Tesla's Model S may be faster in a straight line and the Dodge Charger Hellcat may do a better job dominating the headlines, but when it comes to delivering on the promise of a four-door car that can carry four people in comfort and tear up tracks and roads alike like a high-end sports car, nothing American-made has ever been able to match the three generations of CTS-V.

Admittedly, I—like much of the automotive press—have a sweet spot for this car. Cadillac spent the last decade making sure the CTS-V was no stranger to America's journalists, proffering it up with an enthusiasm not often seen by purveyors of cars in its performance class. I drove the second-gen CTS-V on enough occasions, it'd take more fingers than I've got to tick them all off; it was the first 500-plus-horsepower car I ever drove as a journalist, the first one I ever took on a long road trip, and the only one I ever took on the Gumball 3000. I haven't spent quite as much time in the third-generation CTS-V, but I've logged enough miles to know it well, having sent it down highways and byways and even a few unrestricted sections of Germany's famous autobahn.

Still, when the folks who run Cadillac's New York-area media fleet asked if I wanted to take a 2019 model—equipped with March-appropriate winter tires, naturally—for a weekend run to Vermont and back, I sent back the professional equivalent of the heart-eyes emoji. There's always room for a little more CTS-V in your life.

Even at the end of its life, there's no arguing with its performance. Not when there are still 640 pounding horses beneath that bulging, angular hood—more horsepower than any of its main foes. That's an awfully intimidating number—remember, kids, that's just 11 ponies fewer than the Ferrari Enzo that wowed us last decade—made all the more so by the fact that, in increasingly anachronistic fashion, it funnels those all those horses (and 630 pound-feet of torque) to the rear wheels alone. Yet it's docile as a sedated lamb—so long as your foot never moves past the first 20 percent of the throttle's travel, at least. Push deeper, and the power seems to build exponentially, like quakes on the Richter scale. By the time the gas pedal hits the firewall and the supercharged LT4 is at or near its 6,400 power peak, this leather-lined luxury car feels like it could catch up to an ICBM.

All that power may seem a little excessive for the real world, but once you've calibrated your mind (and foot) to the smallblock's fury, it leaves you feeling rather invincible. No gap in traffic cannot be punched through, no broken-yellow-line pass cannot be made; I ripped past seven cars and the unhurried milk truck holding all of us back on one Vermont straightaway where no one else dared to even attempt a move. Running south from Albany on the New York Thruway in thick traffic that ebbed and flowed between 45 and 90 miles per hour, the CTS-V made slicing through the gnarls of vehicles too easy, the massive Brembos yanking the speed down and the smallblock ripping the car back's velocity back up. In most cars, cutting up traffic like this would be a tense exercise; in this Caddy, it's a blast.

As the road narrows and the curves tighten, however, something unusual happens: the car becomes engaging in a way you don't expect a super-sedan to be. Some of that, no doubt, is that it's easier to notice the benefits after sampling the CTS-V's main foes, a collection of German cars where the front wheels are also saddled with taking power from the engine and the steering rack. But much of it's also due to the yeoman's work the all-but-unsung GM engineers did to build a modern-day car with the best steering they could manage, stiffening the car's structure with new braces, subbing in tie rod ends in favor of bushings, and even tweaking the electric power steering's systems to allow more feedback as the driver dials the car into more aggressive performance modes. Admittedly, the car feels a bit heavy in the tight turns, but the direct steering and taut suspension always keep the mass well in line; there's never a sense that the roughly 4,200 pounds (plus occupants) will overwhelm the parts tasked with controlling it. Besides, a Cadillac should feel a little weighty from behind the wheel; it's the heir to a century of mighty American luxury cars, not a Lotus.

Cadillac's Performance Traction Management system has been lauded early and often, serving up multiple flavors of computer assistance once the car's drive model selector flips to Track and making the most of the electronic limited-slip diff, StabiliTrack-branded ESP, and hard-working traction control. I dove into PTM's menu exactly zero times during my drive. Didn't need to; no one really does, not on real-world roads—and certainly not on Adirondack two-lanes at close to midnight with the temperature near freezing. Dialing the car up to Sport mode is enough to satisfy the needs of all but the maddest street driver.

More than anywhere else, perhaps, the interior is where this four-year-old car is showing its age. It's functional, sure, but simplistic and outdated when stacked against any high-end luxury car to show up in the last few years. The chief example of that sits proudly front-end center: the glowing blue-hued screen of CUE, Cadillac's long- and rightfully-maligned infotainment system. Every new generation of infotainment—including the ones found elsewhere in General Motors' fleet—makes the CTS's version seem worse, the haptic-swipe volume control being perhaps the most infuriating means of adjusting a stereo ever devised. Fortunately, once you program your presets, you can avoid CUE for 90-plus percent of the audio commands, using the steering wheel controls and Apple CarPlay's own interface, which is far more intuitive than the UI devised by GM.

Otherwise, though, any complaints are mostly matters of preference and style, not flaws that distract the driver from his or her task. The 12.3-inch digital gauge cluster is still effective, easy to read and delightfully customizable. The flowing lines of the interior trim still look as elegant as they did in the Obama years, even if the newer CT6 and XT5 boast nicer materials. The optional Recaros are a little tight around the edges of the thighs over a long drive, and they're showing clear signs of wear after just 8,000 miles, but they're otherwise supportive and comfortable. (If you don't have a 36-inch inseam, your biggest complaint will probably be the lack of ventilation on your butt.) Still, the regular seats aren't exactly sourced from your great-uncle's Eldorado; there's no shame in saving the $2,300. At 16 miles per gallon combined and $3 a gallon for premium fuel, skipping the Recaros can buy you 12,266 miles' worth of fuel. 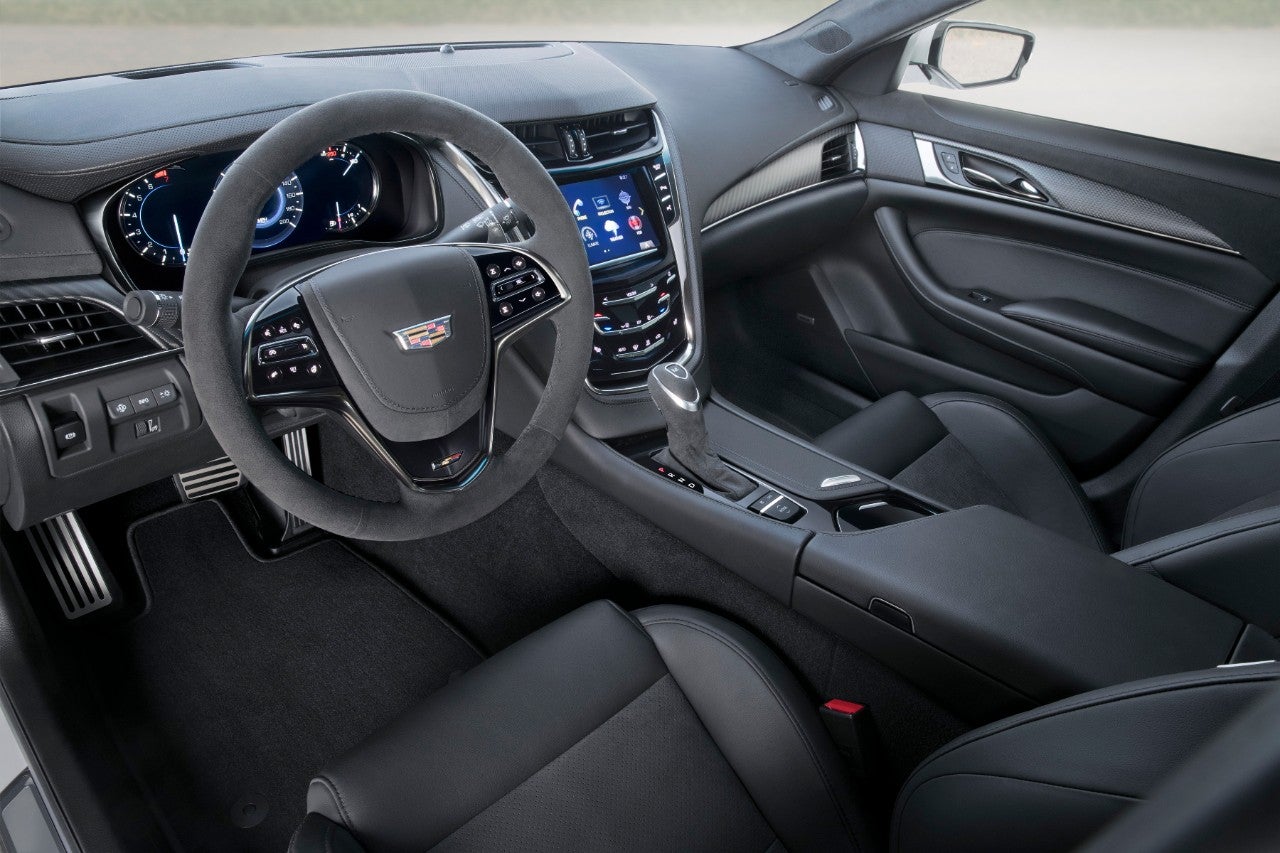 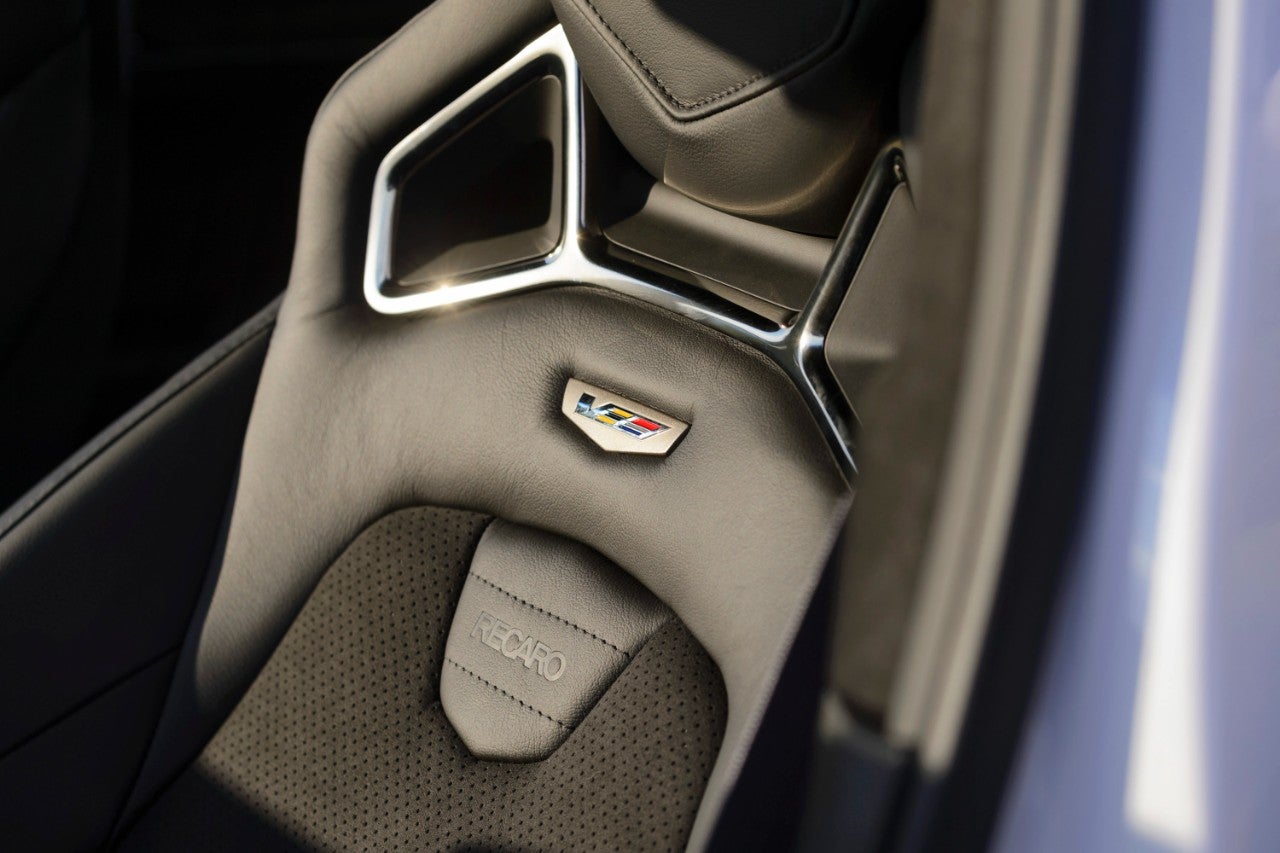 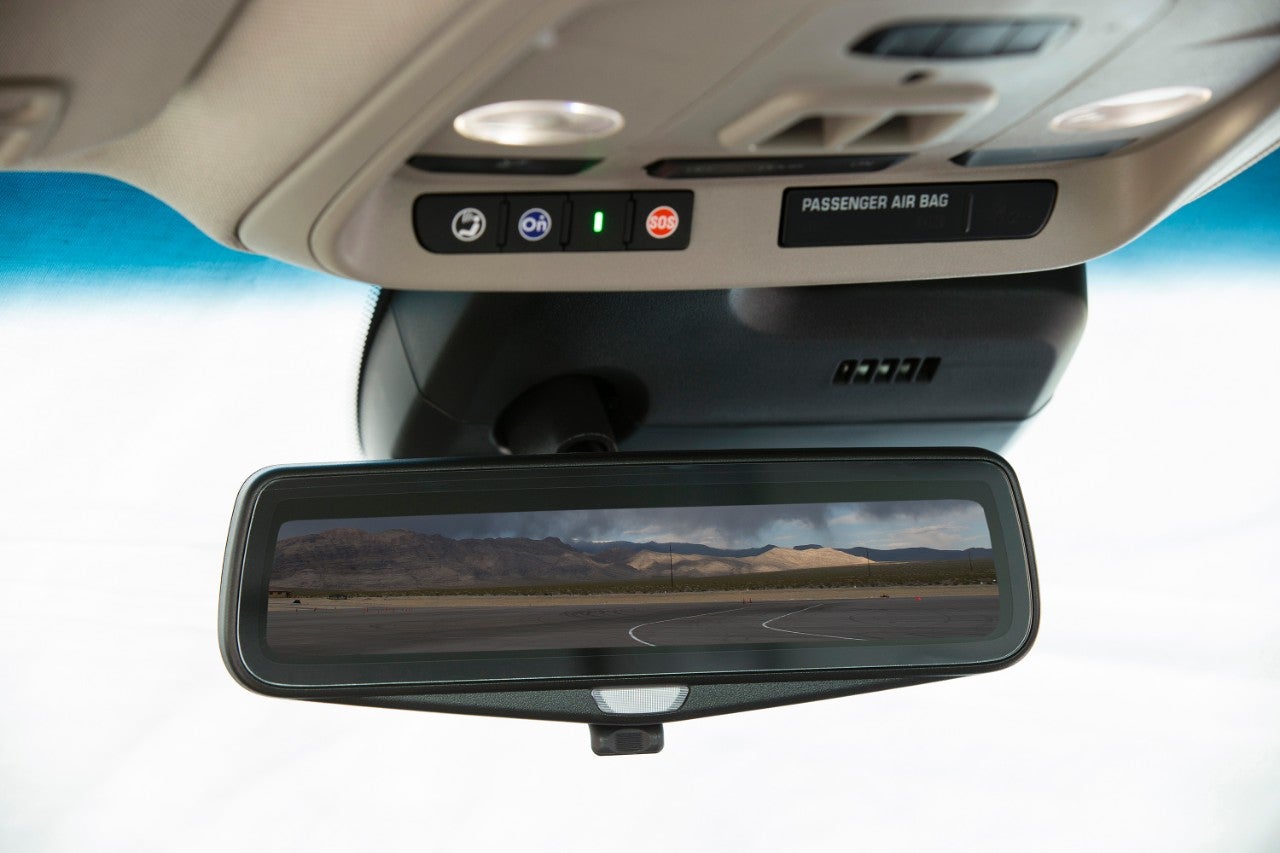 Those flaws—especially the interior—may be enough to push any waffling would-be buyers into the arms of the Mercedes-AMG E63 S or BMW M5. Sure, the mack-daddy Caddy may be cheaper than its Bavarian adversaries—you can have one out the door for $89,290, $14.4 grand less than the M, $17K less than the Big E, and a heart-palpitating $63,460 less than the starting price of a Panamera Turbo—but the number of buyers buying on price in this super-sedan class is liable to be miniscule. Those who choose their supercar-fast four-doors based on barstool stats performance or brand snob quotient—a far larger population than those budget buyers—are more likely to be wowed by Three-Pointed Stars and sub-three-second 0-60 times and Gesture Control than anything this Caddy has to offer.

But that's part of this Cadillac's charm. It's not the obvious choice, the default sport sedan you pick up to keep up with the Joneses. It's the alternative option, the car you pick because standing out and being different a bit lights your fire. You don't buy it in spite of it being a bit crude, a little wild, ten pounds of America-fuck-yeah in a nine-pound bag. You buy it because it's all those things.

The CT5-V, whenever it finally arrives, will no doubt be superior to this car by the simple virtue of its newness. Presumably, it'll have twice as many wheels channeling its mighty power to the ground, along with all sorts of novel technological ways of making the most of its power to make the car both smooth and quick as hell. The interior will most likely be a feast of soft leather, grippy microsuede, and aggressive carbon fiber trim, equally suitable for thousand-mile road trips and eight-minute Nordschleife laps. We can even pray it won't force us into CUE's nightmarish ecosystem. It will, objectively, be a better car.

But it's hard to imagine it'll be quite this special. If for no other reason than...well, it won't be called CTS-V.