This 1971 Corvette ZR2 Convertible might be the prettiest C3 ‘Vette in history and is headed to auction May 13. 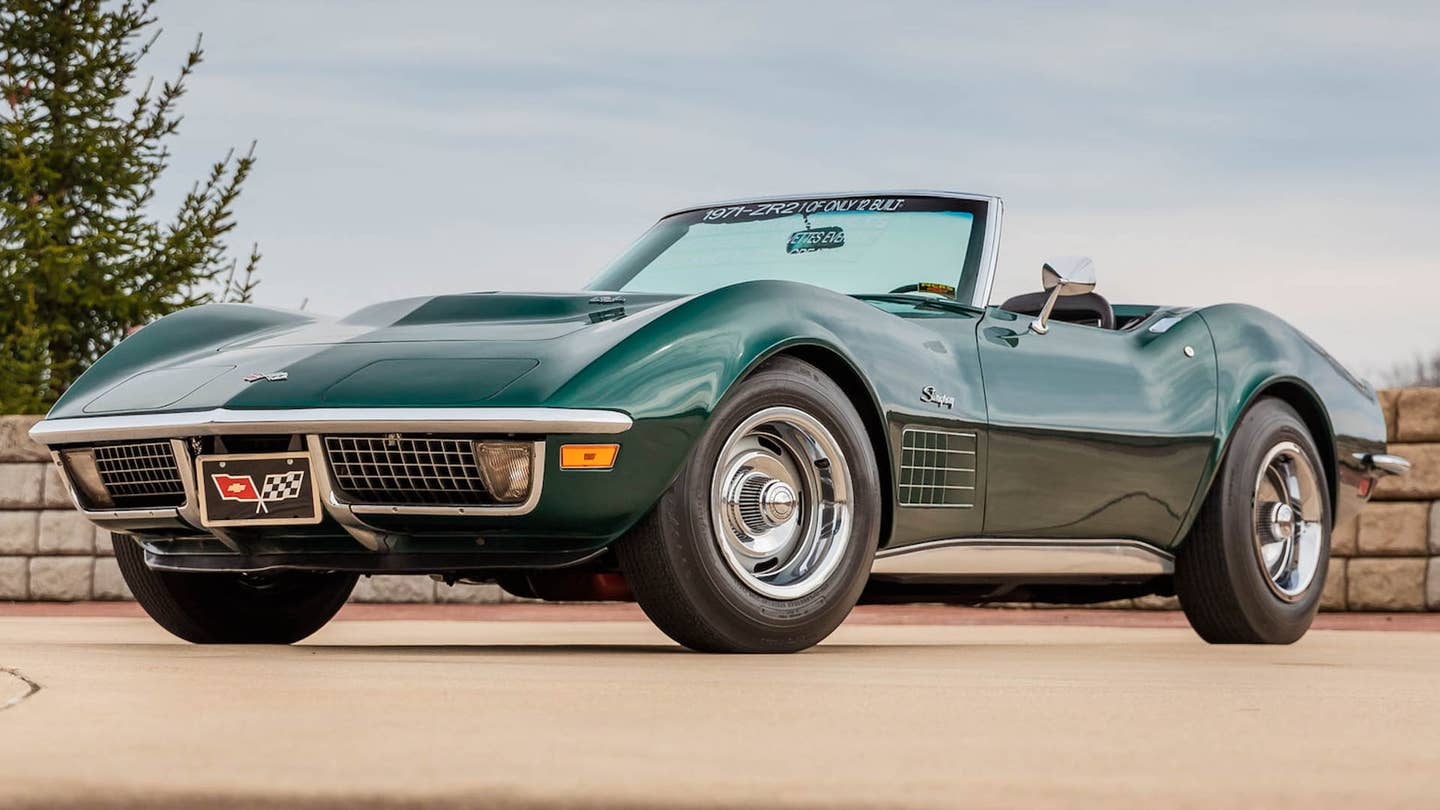 I have an uncle who's an absolute Corvette fanatic and every other week he tells me about another uber-special vintage Corvette that hit the Mecum auction block. It's getting to the point where I almost don't believe how rare his 'Vettes are because, honestly, how many "only one" and "one-of-a-kind" Corvettes can there really be? Apparently many and this one that's headed for the Mecum auction in Indianapolis May 13 could be one of the most special of all -- a 1971 one-of-two Corvette ZR2 Convertible.

This absurdly rare Corvette ZR2 Convertible comes from the Ed Foss collection and it's not only one of only two ZR2 convertibles ever made, it's one of only 12 ZR2 package-equipped Corvettes period. This specific car is also the lowest-mileage ZR2 known in existence, with only 8,702 miles on the odometer, and is completely unrestored. So it's no surprise the estimated sale price is between $1,000,000-$1,200,000.

The Corvette ZR2 was nicknamed "Zora's Racer" after Zora Arkus-Duntov, often called the "Father of the Corvette." It was a mysterious car back in its day, as Chevy didn't really do any press for it prior to its release, nor did it host any press drives for journalists. And because it was so expensive, priced at $7,243 (the ZR2 package was $1,747 on top of the C3 Corvette's  $5,496 starting price), so few people actually bought it. The ZR2 package came with a 454 cubic-inch LS6 V8, a four-speed Muncie "Rock-Crusher" manual transmission, bigger brakes, a higher-capacity radiator, and upgraded suspension.

What makes this ZR2 Convertible even more special is its color combo, a stunning Brands Hatch Green over a black leather interior with wood trim. I don't think there's ever been a prettier C3 Corvette from the factory. It's absolutely stunning. And if there was any question about its originality or condition, this '71 Corvette ZR2 Convertible has won the MCACN Triple Diamond Award and the NCRS Top Flight Award 2017. The only other ZR2 Convertible in history ironically also sold at a Mecum auction back in 2019 but it's had a body-off restoration, which makes it less desirable than this all-original green one headed to auction later this month.

I'll be sure to watch the upcoming Mecum auction with my uncle so I can watch his brain explode over this ZR2 convertible.