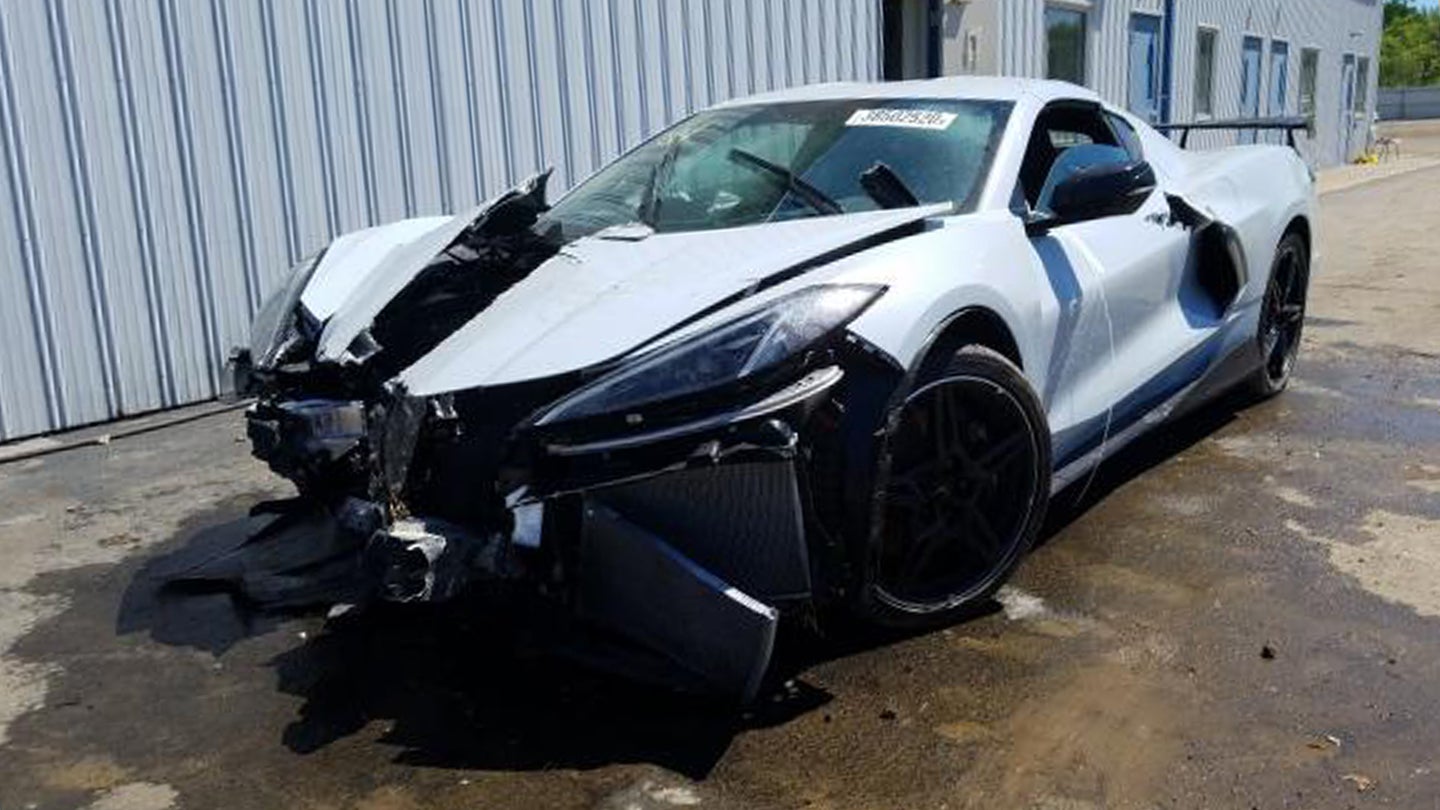 If you want to make a bad decision, it's hard to top grabbing the first 2020 Chevrolet Corvette C8 to turn up at a salvage auction. But hey—with aftermarket prices getting out of hand and GM's abbreviated production schedule still constricting supply, it might be a decent deal, right? Copart doesn't think so. It's valuing this horseshoed 2020 Corvette at $107,699, damn near twice the cost of a new base model.

Now, It won't sell for that. But the frenzy means it still might go for more than any car in this state should. To be specific, it's a 2LT car with the Z51 performance package, the latter being vital to achieving the mid-engine Vette's famed sprint to 60 mph under three seconds. A peek at the build sheet shows it's got a ton of options, too, like carbon fiber exterior trim, the Z51 magnetic ride control suspension, GT2 bucket seats, and engine bay lights for showing off that 6.2-liter V8. Its sticker was likely north of $80,000

Making its crunchy fate all the more tragic, this C8 is actually one of the first made for the 2020 model year, being manufactured in January, Autoblog reports. That means it was made before the beginning production was officially announced on February 3rd. Autoblog speculates the car could've been made as a dealer demonstrator, and we think that's likely as well. We ran the CarFax and discovered it was sold at Sunnyside Chevrolet in Elyria, Ohio on March 24. The crash that claimed its front end occurred on May 15. Unfortunately, no details are recorded. But the damage says it all—this C8 met a pole or a tree at high speed.

The best thing to do with this car, of course, would be to remove the drivetrain and swap it into something else. That would probably pan out because the engine and transmission appear to be unharmed, and the car's electrical system works well enough to power on the the digital gauge cluster. Images of the rear of the car indicate only a small amount of damage, with the car's high-rise carbon fiber spoiler being the only obvious casualty.

Really, if you desperately need a C8, you're better off waiting a bit. It would take a long time to Bondo the front of this car anyway.