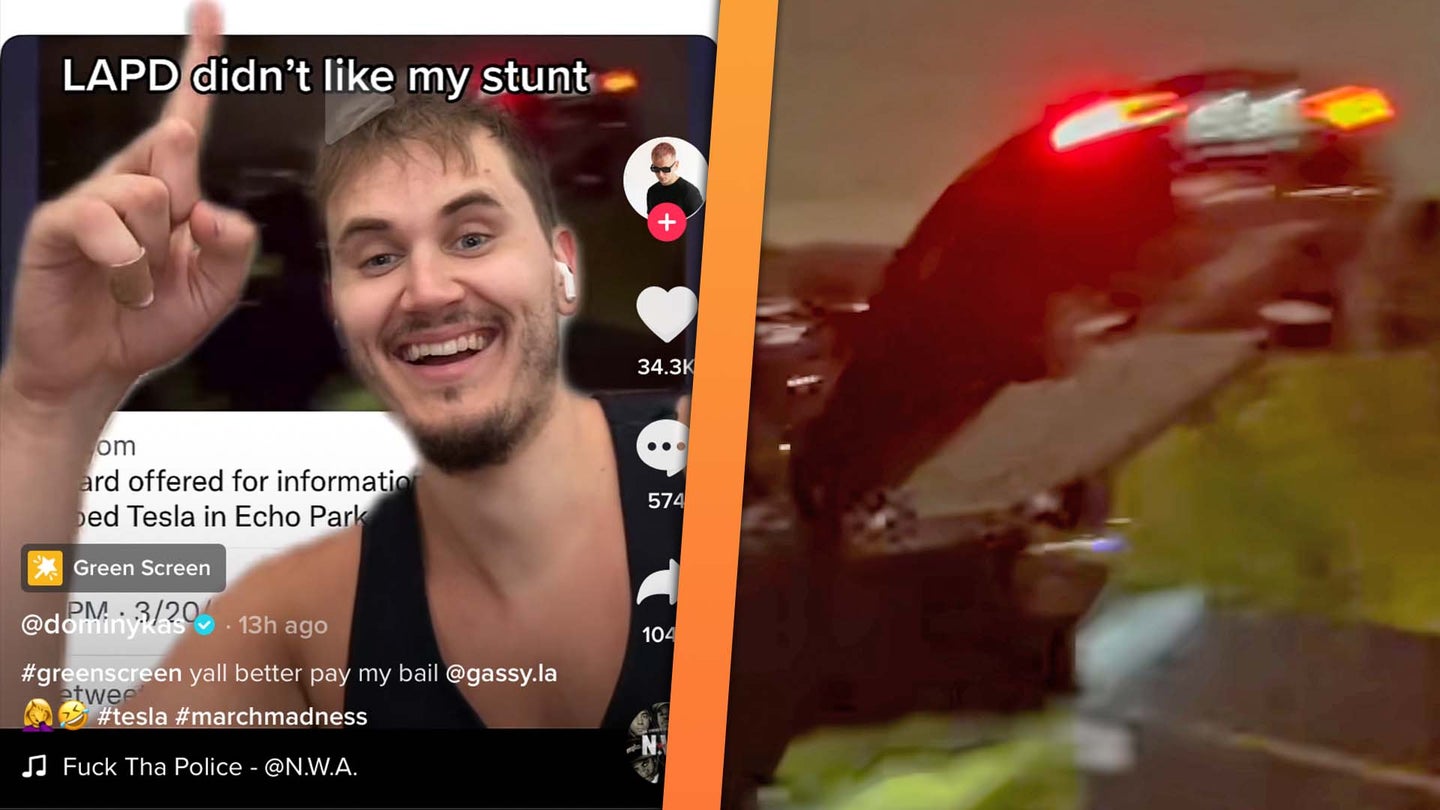 If you're on TikTok (or Facebook or Twitter), then there's a good chance you saw this video of a Tesla Model S catching air over the weekend. The clip that's since gone absolutely viral shows the black sedan hitting an uphill intersection at speed early Sunday morning, launching nose-first into the immediate downhill section, then colliding with two parked cars and a bunch of trash cans. It couldn't have been a fun landing for the driver, but what's going to be even less fun is when they're dealt with by the police—not that they seem to care.

It looks like the Model S driver in question is Dominykas Zeglaitis, known on social media as Durte Dom. He's been active on TikTok since the crash got traction online, and several videos have been posted giving background info on the crash. He also straight-up called it "my stunt" in one upload.

The driver seemingly attended a Los Angeles-area Tesla meet right before the leap. They allegedly invited a group of people, including YouTuber Alex Choi, to see the spot where TikToker David Dobrik infamously jumped his Tesla before. Then, as Choi says in a video posted to his channel on Sunday, they pulled the stunt without warning.

The result was chaotic, with sparks flying and the car's airbags deploying immediately upon impact. Nobody's shown getting out of the car, though a neighbor reports that they all hopped into another Tesla and fled the scene.

A YouTube video uploaded by the Los Angeles Police Department Central Division shows the stunt from a few different angles. It also notes that there's a $1,000 reward on offer for anyone who can provide information leading to the driver's identification and arrest. As the LAPD announced, though, they seem to know who was behind the wheel.

According to a tweet from the department's official Twitter account, more than 90 percent of tips have pointed to "the same person who has a TikTok handle of @dominykas or @durtedom on Twitter." Indeed, that TikTok account shared a video of the Model S soaring that's since been viewed 11 million times. In a next-day follow-up, they said, "You guys, I just woke up. I don't even know what happened last night I was so f*cked up off these guys right here," shaking what looks to be a bag of Gassy weed edibles.

The video of the crash uploaded by @dominykas to TikTok opens with a brief cut of him reaching into a similar-looking Gassy bag, with a caption that reads "just got this last week too smh... @gassy.la got me zooted."

Some social media users say this wreaks of shady sponsored content, though @gassy.la publicly refuted and said, "We are not condoning this behavior you will see our lawyers dom."

As recently as Monday morning, Zeglaitis posted on TikTok saying "We made it on the news!" with another upload just a few hours earlier showing an article with a text overlay saying, "LAPD didn't like my stunt."

As a result, the LAPD Central Division asks that no more tips are sent in identifying Zeglaitis as the driver. The law enforcement agency has reached out to him online, where he sports 2.7 million followers on TikTok, 924,000 followers on Instagram, and 57,000 followers on Twitter.

“It never should’ve been done,” explained Detective Juan Campos of the LAPD. “I don’t know what they were thinking about. It could’ve gotten somebody killed.”

This 932,000-Mile Tesla Model S Is Still Hanging In There

It’s not what you’d call all original, but that’s still a lot of miles in less than a decade.

Future mods include a supercharger and other performance-enhancing upgrades.