The first El Camino-ized Tesla sedan was actually made out of a salvage Model S which famed conversion shop EV West got its hands on—and this is it. 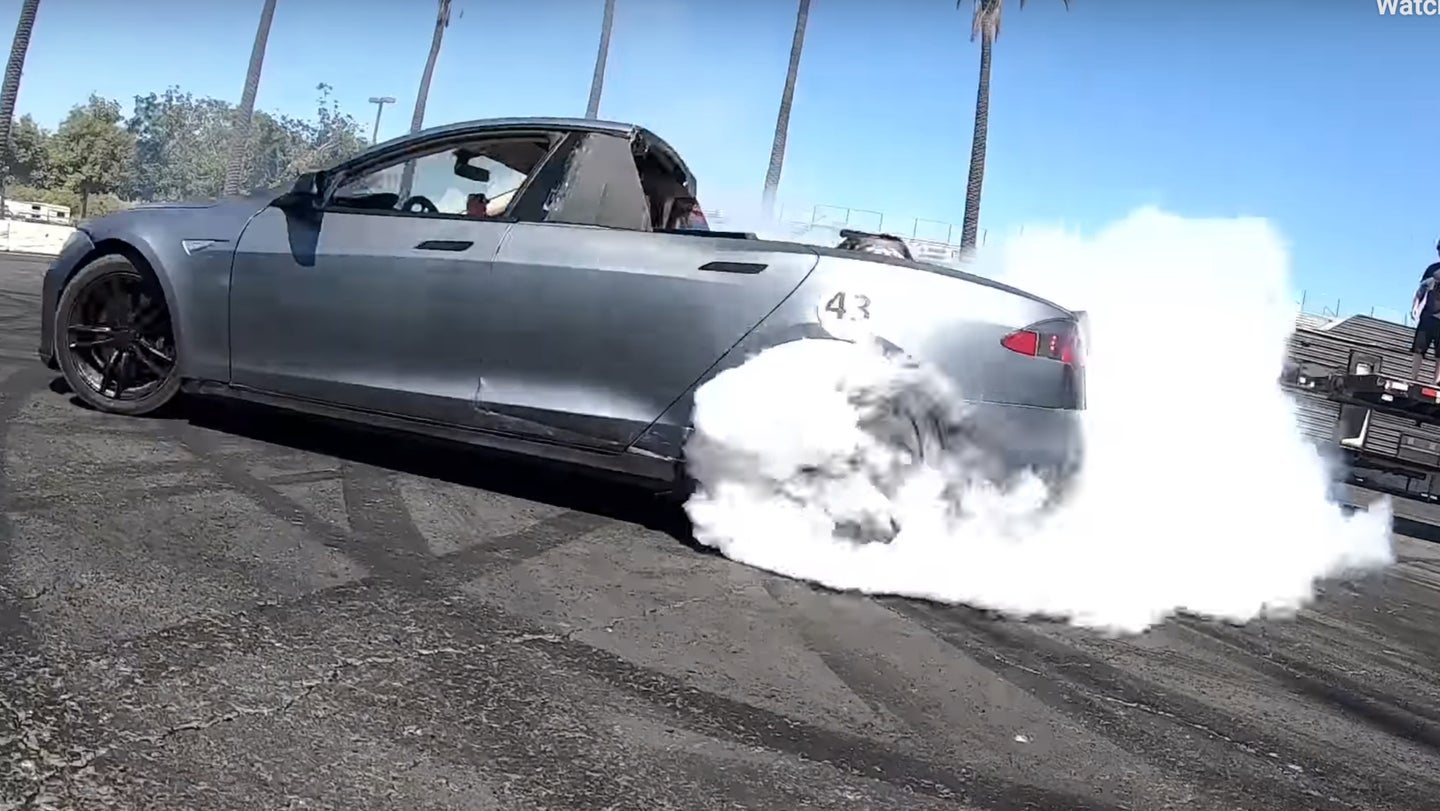 El Camino-style pickups made out of car bodies have a special appeal to them: all the functionality of a small truck, but with car-like handling and amenities. That's why it's hard not to feel intense amounts of jealousy with builds like Simone Giertz's Truckla, where she added a pickup bed to a Tesla Model 3 to haul tools and other stuff she needed for the "shitty robot"-building business.

But someone actually started working on a Model S pickup conversion slightly before Giertz unveiled her Model 3, and he did it in the name of hauling dirtbikes in supreme comfort. Eddy Borysewicz wanted to haul his dirt bikes into the desert for less than $80 a haul just for gas, so he worked with electric vehicle shop EV West to turn a damaged Model S into the ultimate, quiet, comfortable, and inexpensive to run toy-hauler. InsideEVs had a post about Borysewicz's finished-enough franken-Tesla back in April—months ahead of Giertz's reveal—so, the story checks out.

Recently, this Model S "Teslamino" came down to the Hoonigans' yard to destroy tires, as you do there. Unfortunately, it also destroyed its back end in the process when it slammed into the wall, so the Hoonigans brought it back to redeem itself and dive into its backstory a bit further. (It broke again anyway, but hey, what can you do?)

The Teslamino is a bit more of a work in progress than Giertz's Truckla, but as someone who's into the form-over-function aesthetic, I dig it. Borysewicz worked with a friend who owns EV West to acquire a wrecked Tesla for the idea. EV West usually disassembles salvage-title Teslas for parts, but this one was in okay-enough condition (save for a broken steering rack) to fix up, drive, and sawzall into a pickup.

Borysewicz says they had to be extra careful about the car's extensive wiring, but otherwise, it was a pretty simple conversion. "These cars are so stiff that you can ride them with just the pan," he explained.

The Teslamino has air-ride suspension that Borysewicz sketchily adapted from another Tesla, too. See that nest of wires under the hood? That's it.

The best part of it all, though, is that they've taken a car that will already pin your head to the headrest with torque and made it lighter and sillier to drive. I love it so much. This thing is so delightfully sketchy that it features a large wooden board with a zip-tied-on-rubber chicken to extend the handbrake. If that's not my personal aesthetic in a nutshell, I don't know what is.

Borysewicz also doesn't really care whether you like his work-in-progress of a build, either. "There's a lot of pissed off people, but hey, whatever," he told the Hoonigans.

These builds are just further proof that the world can't wait for electric pickup trucks to finally go on sale. In the meantime, you better get a sawzall.

This 106-year-old workhorse literally replaced the horse, but batteries are not included.