These Mercedes-Benz Hearses Look Like Cars From a Pixar Movie

Ignore the fact that a Pixar movie to feature a hearse would be hella dark for a moment and tell us this doesn’t belong in one. 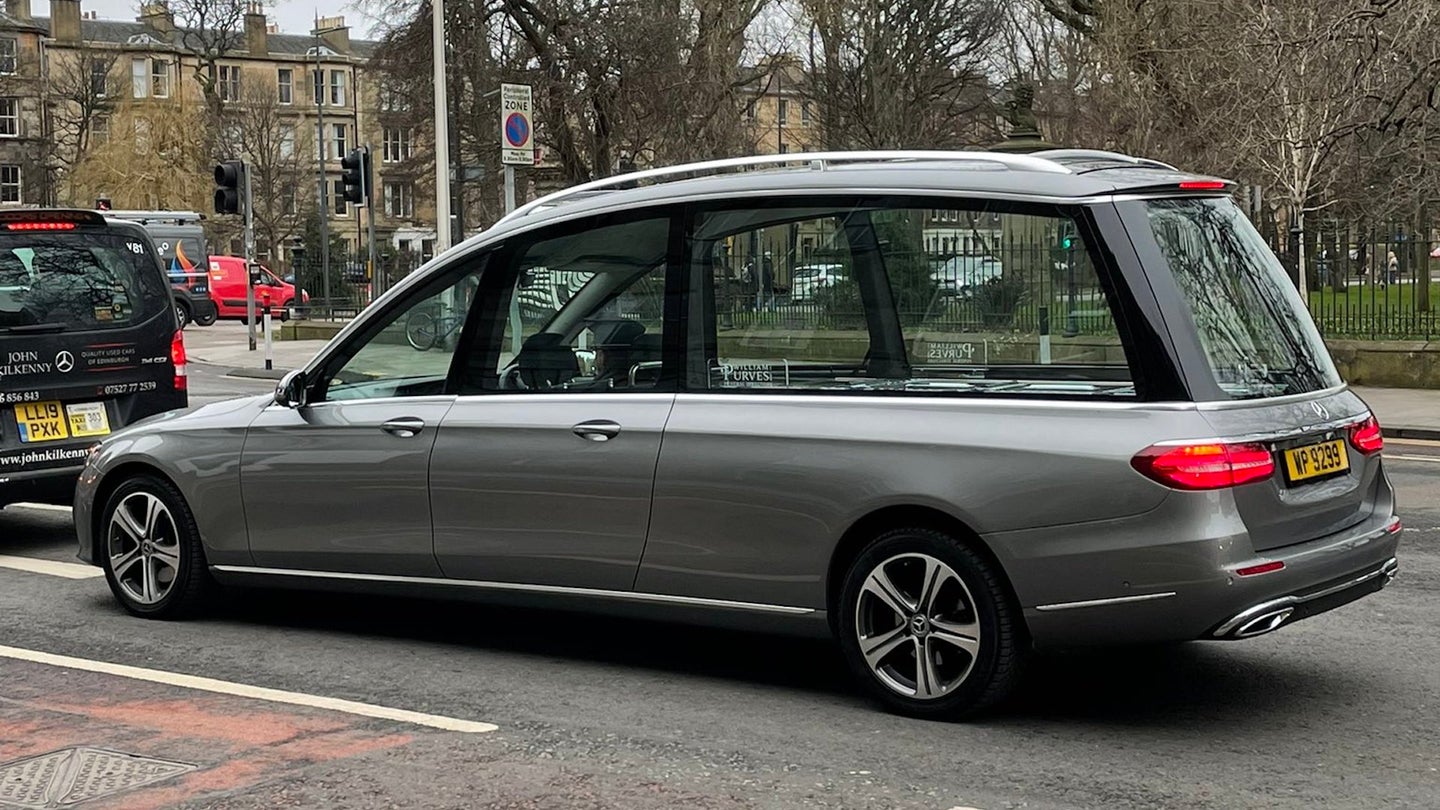 By nature of their duty, hearses kind of have to be oddly proportioned. Even so, there comes a point where the person who builds a car absolutely has to be screwing with their client, as in the case of a Mercedes-Benz E-Class hearse spotted in Scotland looking like a prop from a Disney movie.

This hearse was photographed in Edinburgh by Quebecois musician Jacques Green, who was "transfixed" by the car as it passed him by. It appears to be the work of Irish coachbuilder Duffy Coachbodies, a specialist in Mercedes E-Class limousines and hearses.

Duffy's E-Class hearse as it calls this body style, comes in at nearly 20 feet long and 6.5 feet high. Compared to a standard E-Class, it's close to 4 feet longer and 20 inches taller—an increase of some 35 percent—almost all of it greenhouse. In Europe, hearses with windows and blinds are more common than American-style hearses with landau bars, those S-shaped metallic designs found on the sides of hearses here. They're a stylistic holdover from the days of horse-drawn carriages when a landau top meant a folding leather roof, part of whose collapsible frame formed an "S" shape on the outside.

Along its roofline, which forces me to make an involuntarily "mweEEEEEEEp" sound, it has purpose-built roof bars, which The Other Side of Funerals reports were commonly used to secure flowers or other decor. Today, though, they're largely decorative themselves. While its back doors would suggest a rear seat, they like many hearses in North America and Europe don't open onto rear seating for the family of the deceased—a feature apparently rare on hearses in said regions. Instead, they open into the load area, presumably aiding with unloading the casket.

While this Mercedes' design is meant to be functional and utilitarian, it's also inadvertently amusing on account of its proportions. It almost looks like an R-Class minivan that's molting, or a whale that washed up on the beach and is getting ready to do what beached whales do. Were it not for the lack of a back seat, it could pass for a VIP shuttle for NBA players, though their choice in cars can be humbler than one would expect. If anything, its looks call to mind that new USPS mail truck, which some described as being Pixar-like when it debuted. I'm not sure what kind of Pixar film would involve a hearse, possibly a macabre sequel to Inside Out, or maybe just a goth spinoff of Cars. That might sound terrible, but it couldn't be any worse than Cars 2 was, especially if it involved Tim Burton and Danny Elfman. ♫ In our town of Limousine... ♫

Update: Mar. 4, 11:09 a.m. ET: This article has been updated to properly identify the hearse’s manufacturer. A previous version cited a tweet that incorrectly identified it as Coleman Milne.