Built by Toyota engineers and prepped for racing by Carroll Shelby, this super-rare car will likely break some records. 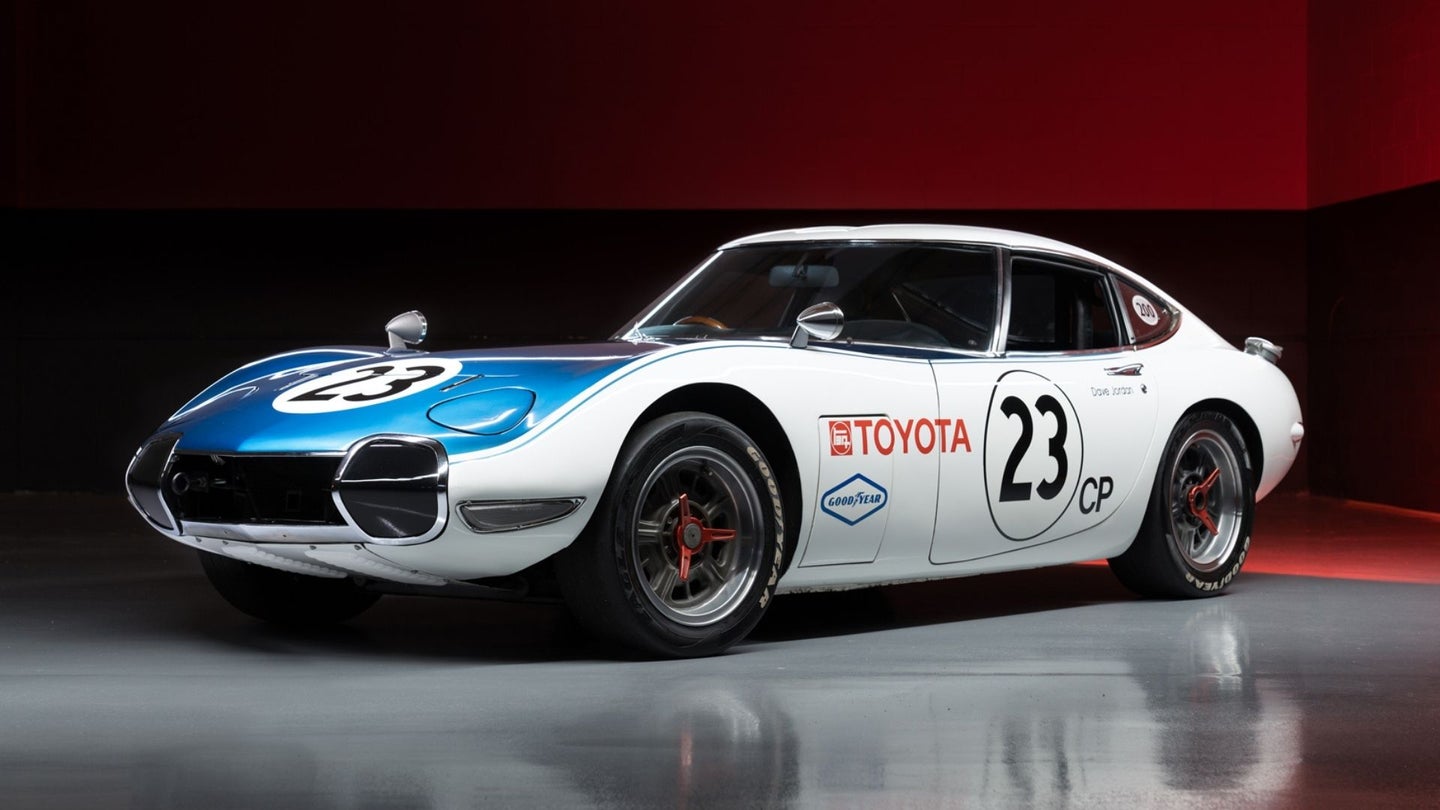 A few weeks ago, Hagerty valuation expert John Wiley shook his Magic 8-Ball and predicted that a Japanese car would break the $2 million ceiling at auction in 2022. “It could be a 007-worthy Toyota 2000GT convertible, or a winning Mazda (or Toyota) Le Mans prototype,” he said. “Or, a Nissan Skyline R34 GTR NISMO Z-Tune and Lexus LFA Nürburgring might also break this threshold.”

Gooding & Company is presenting a strong contender that is likely to prove that prognostication to be true: an ultra-rare 1967 Toyota-Shelby 2000GT. The high-end auction house estimates this racecar to be worth between $2.75 million and $3.5 million at the Amelia Island Concours coming up in March.

This car has a fascinating pedigree. Toyota shipped chassis MF10-10001 to Carroll Shelby to develop the 2000GT as part of the Japanese brand’s $500,000 investment in its racing program. Shelby and his team went to work in his California shop, prepping it for the 1968 SCCA Championship in the C-Production class. The 1967 2000GT was raced for a brief period of time and remained in the U.S. as one of three cars prepped by Shelby himself.

“Given its unique status as the first serial-numbered 2000 GT ever built, and its important role in the Carroll Shelby-run SCCA racing program, MF10-10001 is surely among the most significant Toyotas ever built,” Gooding & Company says. “And arguably, one of the most influential Japanese automobiles of all time.”

The auction house says the car has been owned since 1980 by the same private collector, “a gentleman widely regarded as the foremost 2000GT specialist.” While the consignor isn’t named, a little research revealed that it’s Robert Tkacik of Maine Line Exotics, who has a photo of this car on his site. Tkacik purchased the car four decades ago and finished a frame-off restoration to its original state in the early 90s. Once restored, the collector took it on the road to be showcased at NHIS, Monterey, the Goodwood Festival of Speed, and a number of Concours events. A Japanese film company even produced a full-length documentary about this car and its history, and presented it in movie theaters in Tokyo in 2010.

With prices skyrocketing for used and classic cars in the last two years, this restored beauty will probably fetch a number in the $2-3 million range when the hammer comes down. Place your bets now.

Got a top? Comment below or send a message to kristin.shaw@thedrive.com.

Finally, There’s a Shelby Cobra on the New Season of Cobra Kai

Throwback character Terry Silver rolls into town looking for trouble in a 1965 replica.

It’s the most expensive Mustang in the world and was driven extensively by Ken Miles. Yes, that Ken Miles.