Iconic Germans, brash Brits, and seductive Italians—just bring the cash and they're all yours. 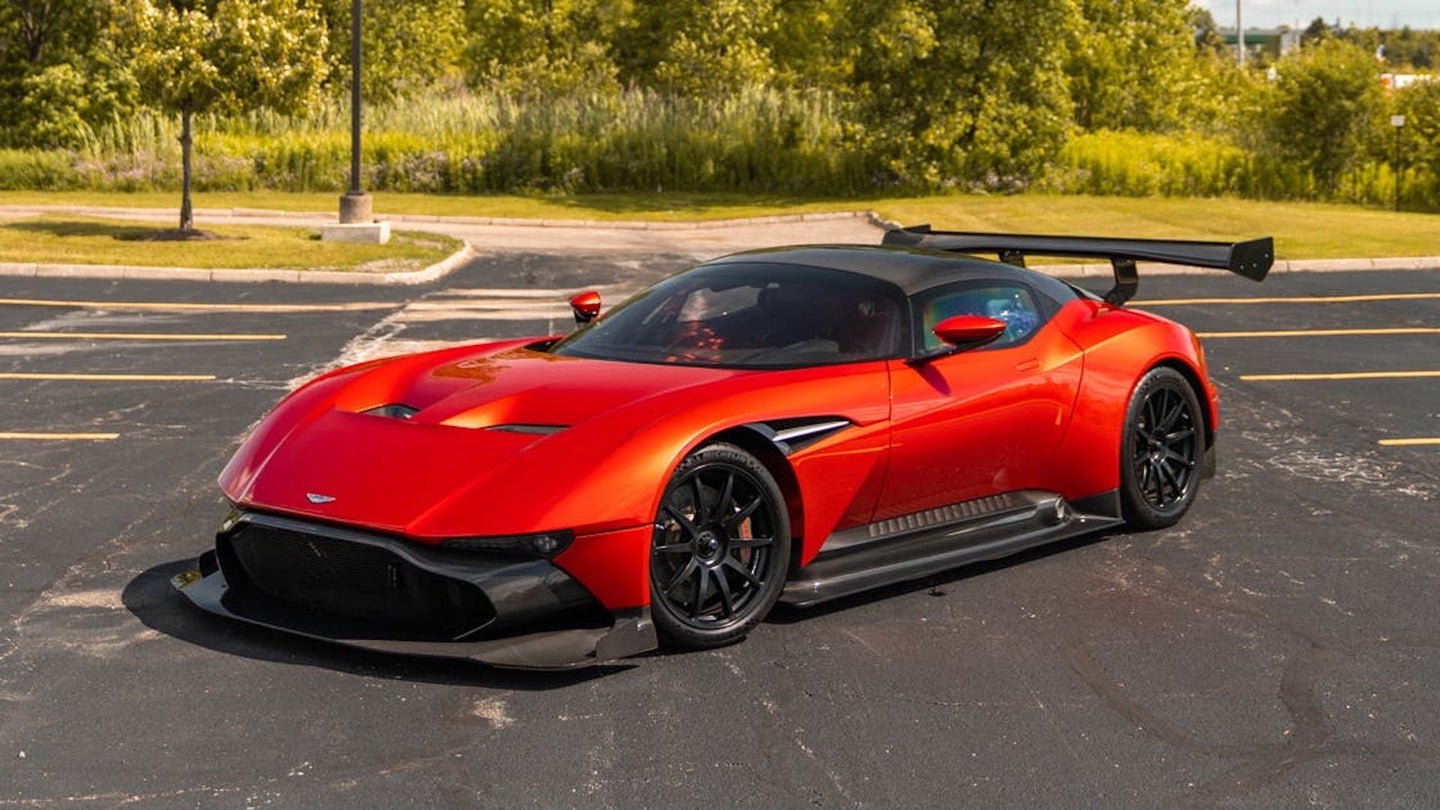 All images copyright and courtesy of Gooding & Company. Photo by Josh Hway.
SHARE

With McLarens faster than an auctioneer's tongue and Packards so flawless only Gatsby could do them justice, Gooding & Company’s forthcoming auction at the 2019 Pebble Beach Concours d’Elegance is truly torn from the posters of childhood walls. Affording anything rolling across that auction floor, however, remains for us but a distant dream.

Call us optimistic or out of touch, but we dug through more than 100 pages of achingly beautiful machinery to help uncover some of the biggest and best automotive nuggets in Gooding & Company's upcoming auction.

The Vulcan may be the newest car on this list, but that doesn't mean you'll find a hybrid system. Instead, Aston Martin equipped the Vulcan with a 7.0-liter naturally aspirated V12 and a rear wing big enough to make the owners of even the most Fast and the Furious'd Honda Civics jealous. With only 24 examples built, a $2.3-million price tag, and a name borrowed from a British bomber, the track-only Vulcan doesn't exactly match up with Aston Martin's character of refined grand-touring, but then you see the horsepower dial ripped straight from a PlayStation controller and you just don't care. Aston Martin says that factory configuration qualifies it for all FIA safety standards, meaning you can take it racing. Good thing because it's not street legal.

There is a great irony in Jaguar’s 650-horsepower endurance racer following the Vulcan on our list. Despite dominating the 1988 World Championship and winning the 24 Hours of Le Mans with its V12 powered XJR-9, Jaguar opted for a smaller, more efficient twin-turbocharged 3.0-liter V6 when it came time to produce the XJR-10. Accompanied by pushrod suspension and a refined carbon fiber monocoque from its predecessor, the all-aluminum V6 propelled Jaguar to six victories during the car's first year competing in the IMSA Championship. Though not as successful as the machine that came before it, the XJR-10 was a stunning reminder that even race cars don’t need a heaping V12 to be fast.

This may not have the tire spikes, heat-seeking missiles behind the fog lights, lasers in the hubcaps, or a rocket motor behind the license plate as James Bond made glamorous use of in 1987’s The Living Daylights, but even in stock form the V8 Vantage is truth to the fact that the British did muscle too, and they did it damn well. With a 5.3-liter V8 making between 375 and 432 horsepower, a zero to 60 time of 5.3 seconds, and a top speed of 170 miles per hour, the V8 Vantage rightfully wore the moniker of Britain’s first supercar—all the while maintaining that menacing cool that seems to elude too many of today’s fastest cars. Tweets from the set of James Bond 25, scheduled to premiere next year, show Daniel Craig in front of his very own Vantage V8. If it’s still good enough for Bond, it’s certainly still good enough for us.

Track first. Road second. This was the mentality of Porsche as it set out to build the 964 Carrera RS 3.8. With only 55 road-going versions built, the cars served as the homologation base for the 3.8 RSR. Though many of its features were borrowed from the 964 Carrera Cup cars, which sported a less powerful 3.6-liter version of the same flat-six engine, Porsche engineers were at their most German when building the 3.8. Alongside a nearly 300 horsepower output, a bi-plane rear wing, and an extra-wide stance thanks to the use of the Carrera Turbo’s widebody, the 3.8 still managed to weigh in 600 pounds lighter than the stock Carrera 2. If it didn’t help go around a track faster, it didn’t go in the car.

When you look at a car like the 964 Carrera RS 3.8 and read about its thinner glass and ropes for door handles, you quickly come to one unshakable truth: there doesn’t exist a more pedantic team of engineers than those found at Porsche. And then you see a Singer. With a custom-designed carbon fiber widebody and a meme-referencing tachometer that goes up to 11, the re-imagined Singer 911 has enough small details to put any normal person into unconsciousness. The company’s motto, “Everything is Important,” really tells you all you need to know.

Lacking any of Lamborghini’s jet-plane like design that the Raging Bull is known for, the 350 GT may at first glance seem like a bit of a lost puppy. A front-engined GT car with a cream interior and an understated, cool grey body is certainly not what one imagines when talking about the first production Lamborghini model. Though quickly eclipsed by the revolutionary Miura released just a year later, it was the thoughtful, well-crafted engineering of the 350 GT that first made Lamborghini a viable automotive manufacturer and gave them the freedom to both figuratively and, in the case of some later year models, literally spread its wings.

Tesla may have a lock of sorts right now on gullwing doors, but return to 1955 when Tesla was just a man’s name and you’ll find the Mercedes-Benz 300 SL Gullwing. Though the SL’s gullwing doors may seem like a novelty act at first glance, engineers couldn’t cut into the car's innovative frame’s high sills. The only place engineers could see was to put the door hinges on the roof, and in turn, give birth to the car’s iconic gullwing doors. Now, 300 SL Gullwings commonly sell for well over a million dollars, so we guess we'll all have to settle for a Model X.

For all the praise and fable heaped onto the Ferrari F40, the car first seemed, to put it lightly, a bit of a mixed bag. Granted, the author's own experience with the car was shaped by television and video games, but it seems our senses weren’t far removed from the reviewers who first drove the F40 at its launch as Car and Driver said the Ferrari was “so mechanically delinquent that an onboard mechanic is advised.” Certainly, this wasn’t meant as a benevolent statement at the time it was written, but hindsight brings it somewhere close. In a world of driver-assisted this and electronically controlled that, you look back at the F40 and see three things: a gearshift, pedals, and a steering wheel—the holy trinity. Perhaps “a simple car” isn’t so bad.

Few other words can excite gearheads as much as "Group B." The very mention of it evokes thoughts of dirt-slinging four-wheel drive, flame-spitting exhausts, and, most importantly, homologation cars. With a steel and aluminum alloy space frame, a three differential four-wheel-drive system, and its mid-mounted, fuel-injected, supercharged and turbocharged 1.8-liter four-cylinder, the Lancia Delta S4 Stradale was the closest you could get to driving a rally car short of earning a seat in Lancia’s famed WRC monster. With only 200 examples produced, it may be as much a struggle to get a hold of the road going S4 as it is to get into a real rally car. Whoever manages to get the keys at Pebble Beach better sling some dirt for all of us. Videos or it didn’t happen.

With four Series 1 E-Types up for auction at Pebble Beach alone, Jaguar's famed roadster is a far stretch from the rarefied homologation Porsches and one-off Ferraris you'll find at the upcoming auction. This 1961 example may have been one of the first E-Types Jaguar made, but with nearly 40,000 Series 1 E-Types sold over its seven-year production, it certainly isn't the last. At its release, the E-Type cost a third of the equivalent Ferrari or Maserati, all the while boasting a higher top speed, reaching a blistering 150 mph thanks to its 265-horsepower straight-six engine. Time, certainly, has increased the prices of E-Types today, but in our eyes, the humble Jaguar will always remain a car for the people.