It’s a testament to what can be achieved with simple tools and hard work. 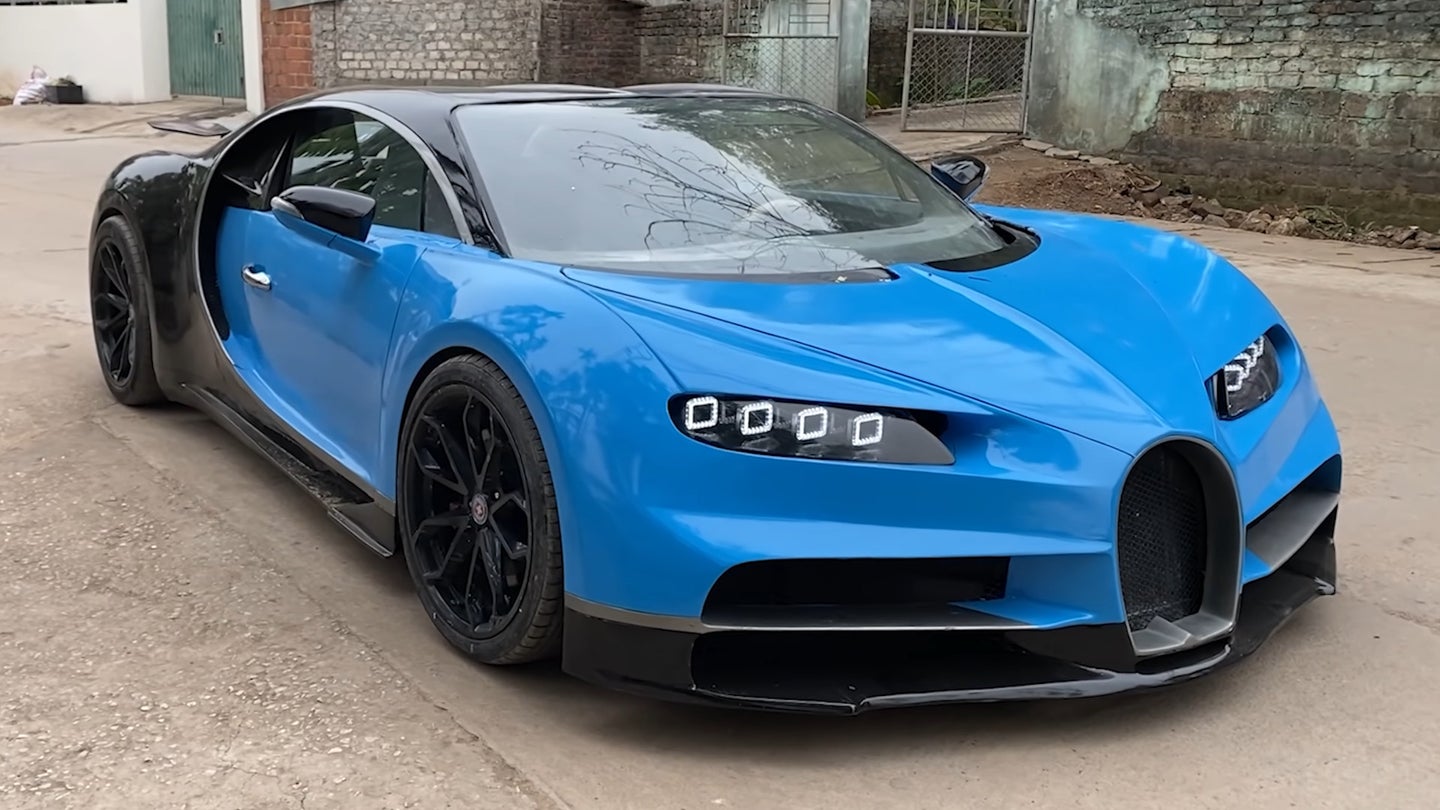 Between the high price of Bugatti's cars and the very limited production runs, most of us are unlikely to ever own a car built at the famous Molshiem factory. However, there's little stopping one from going ham with a welder and whipping up something reminiscent of the brand's output, and that's precisely what Vietnamese YouTubers NHẾT TV have done with their latest project.

Yes, the hard-working fabricators have built themselves a Bugatti Chiron lookalike from scratch. It may not fool the enthusiast eye from less than 100 feet away, but it's quite something to watch such a thing being built from the ground up.

The first step is building a steel frame along the lines of the basic shape of the vehicle. It's all stick welded together out of relatively lightweight stock. Sticky tape is then wrapped around the frame to create a base upon which clay can be applied to form the lines and curves of the car. After a great deal of work, plaster is applied on top of the clay buck, paired with its own steel framing to hold it together, and the clay is then removed, leaving a giant plaster mold behind.

The plaster mold is then fiberglassed internally, leaving the crew with a fiberglass shell to form the body of the car. This shell is then installed on a more robust steel chassis designed for actually driving around. Notably, no welding masks are used at any point; the fabricators use their own hands as a shield where necessary, or simply look away from the bright arc.

The chassis gets a simple A-arm suspension up front that is in many ways similar to that seen on the original NA Mazda Miata, though paired  with inboard coilovers instead of the usual vertically mounted units. The rear gets what looks like a 5-link setup, again with the shocks mounted in an inboard location. Drive is thanks to an old Toyota four-cylinder installed in a mid-engined configuration. The carbureted motor gets freshened up with a nice cleaning and a lick of silver paint.

Throughout the build, all kinds of nifty techniques are employed to get things done in a barebones and simple manner. It's a particular treat seeing a spray can used to transfer the bolt pattern from the hubs to a round steel blank, which ends up machined and drilled to create custom brake discs for the car.

The body is finally installed on the car, and there's a lot of work put into the finishing touches. The grilles gets mesh panels fitted, while much attention is paid to things like the rear diffuser and exhaust outlets to get the look right. There's even a fake panel installed on the rear deck to replicate the bare W16 engine seen in the real Chiron design. The car is finished in a fitting paint scheme approximating the classic Bugatti blue-over-black.

As you'd expect, the driving experience is somewhere below that of the real Bugatti Chiron. With presumably far less than 100 horsepower and stiffness closer to a 1930s Bugatti than those of modernity, it's by no means a performance vehicle.

However, it does serve as an excellent example of what a dedicated team of DIY craftspeople can achieve with a year's effort of sticking their nose to the grindstone. We've seen some similar work before using donor road vehicles, but seeing it done from scratch is even more impressive. The project won't exactly fool anyone, but it's a fun build and goes to show what can be done with a stick welder, some fiberglass, and plenty of time. After all, there's nothing quite like a build that starts with the question "why not?"

Wheeler Dealers host Ant Anstead’s latest project is a tribute to the Alfa Romeo 158 that won the 1950 Silverstone Grand Prix.