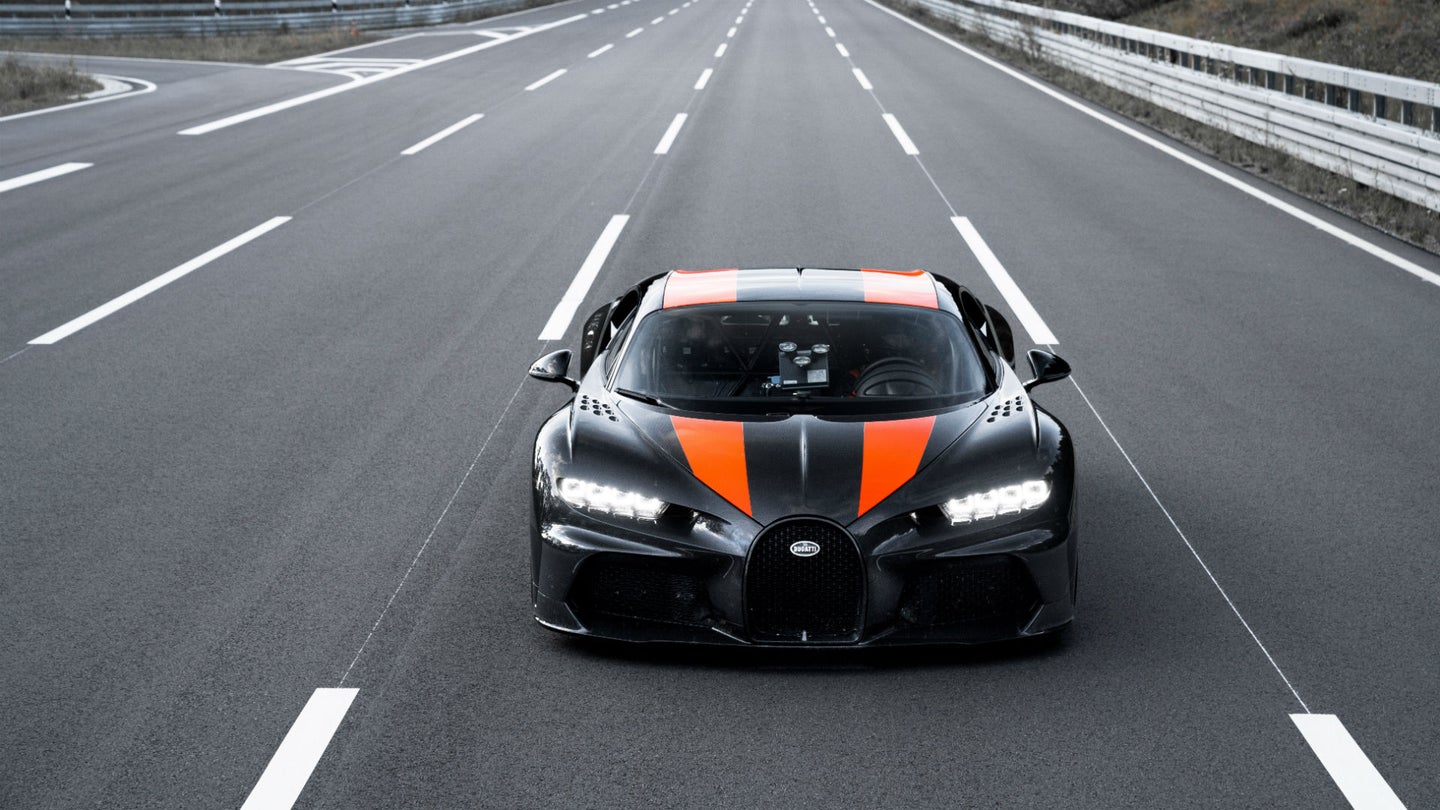 Last month, a long-tailed Bugatti Chiron prototype, later canonized as the Chiron Super Sport 300+, reached 304.77 miles per hour on the main straight of Volkswagen's exclusive Ehra-Lessien test track, becoming the first "production" car to pass the coveted 300-mph mark. With many hypercar manufacturers, from Koenigsegg to SSC, gunning to be the first to reach this ridiculous speed, the question on everyone's lips is: how did Bugatti get there first?

Lots of money and a fearless test driver with a heavy foot—in this case, Andy Wallace—are obviously involved but the more precise answer is in the tires...literally. Speaking to Wheels magazine, Bugatti Head of Development Stefan Ellrott explained that the new Chiron's Michelins have been beefed up with carbon fiber on the tire carcass, the layer of rubber below the tread responsible for load-bearing and shock absorbing.

As the only vehicle component actually attached to the road, tires are simultaneously a car's biggest benefit and its weakest link. Tire technology advancements are the key to not only a successful but also a safe 300-mph record. These circular bits of rubber aren't just supposed to get every multi-million-dollar, 1,000-plus horsepower land cruise missile going, they're also supposed to withstand the speeds these vehicles are more than capable of reaching. At especially high speeds, intense heat, pressure, and other forces are acting on the tires and can lead to sudden excessive wear, disintegration, or a blowout, all of which will end in disaster during a high-speed run.

“Due to that reason we had to modify slightly the series tire of the Chiron. It is still the series tire, but with an additional layer of carbon fiber in it,” Ellrott said. This means that the Chiron Super Sport 300+ will still use a Michelin Pilot Cup 2 tire as it always has, with an additional layer of protection using everyone's favorite weight-saving material, known for not only its lightness but also its strength.

To create a tire that could both endure these forces and give the driver a warning in the event it could not, Bugatti and Michelin took development to the latter's aircraft tire testing center in Charlotte, North Carolina.

"What we did, together with Michelin, to make sure that there would be no risk with the tires, was a lot of bench testing," Ellrott explained. "[With the new tires] you will first have signs that the tire is going to be destroyed. There will be noise and vibrations before the tire completely explodes.”

With Bugatti's record established and the brand announcing that it's outgrown top speed, other manufacturers (namely Koenigsegg) are sure to try to beat it in the coming year, with Michelin's help or not. Let the tire arms race begin.