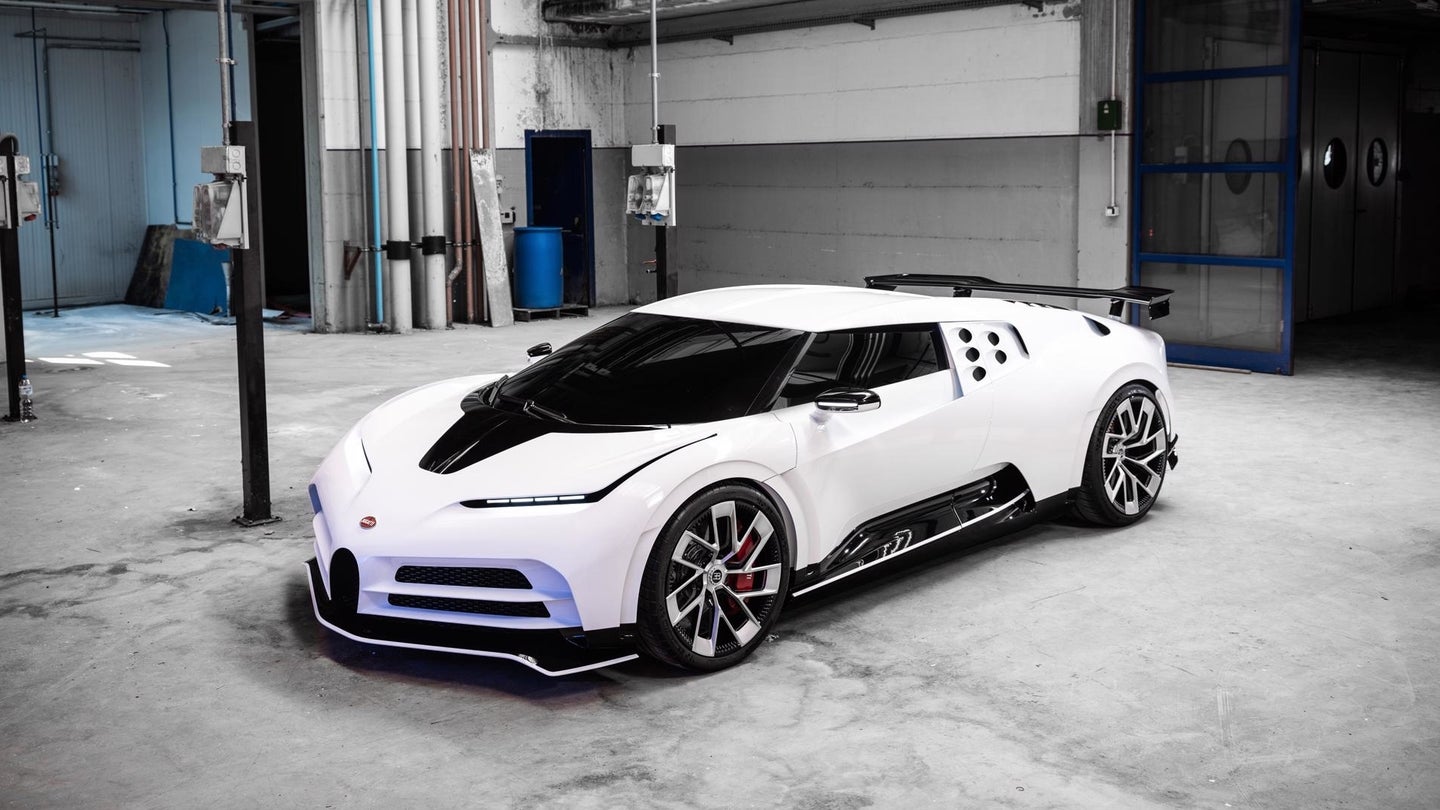 Reveal after reveal, hypercar after hypercar, reworked brain cells after reworked brain cells, we’d love to know what Bugatti’s enigmatic founder, Ettore Bugatti, and his son, Jean, would’ve thought about how far their little French company has come from those early days in Molsheim. We’d also love to know what they thought about Bugatti’s latest hypercar, a car that celebrates the company’s famed EB110, the $9 million Centodieci.

“We are proud of our long Bugatti history, of which the EB110 is very much a part. That's why

we’re celebrating a reinterpretation of this extraordinary vehicle with the Centodieci, Italian for 110,” said Stephan Winkelmann, President of Bugatti. The Centodieci, takes inspiration from the legendary EB110 supercar brought to life in the late 1990s. Based around the already stupendous Chiron, the Centodieci uses the same quad-turbocharged 8.0-liter W-16 engine as motivation. Except, while the standard Chiron gets a measly 1,479 horsepower, the Centodieci’s power plant produces a nuclear 1,600 horsepower.

According to Bugatti, the extra Nissan Kicks-worth of horsepower comes from revised tuning. But due to the overwhelming heat the 8.0-liter quad-turbocharged engine produces, Bugatti’s engineers were quick to add an additional air-inlet that funnels the cooling substance to the hypercar’s oil radiator. 62 mph is handled in just 2.4 seconds, 124 mph in 6.1, and 186 mph in 13.1 seconds. Like it’s pedestrian sibling, the Centodieci will hit an electronically limited top speed of 236 mph, which is 25 mph slower than the Chiron. This is due to the car’s more racier exterior which trades outright speed for bone-crushing downforce.

Bugatti’s head of design, Achim Ascheidt, said that the homage to the great EB110 was challenging and that he couldn’t “allow oneself [to] be captivated too much by the design of the historic vehicle and work solely in retrospect.” Adding, “We faced a number of technical challenges in terms of the development and design of the Centodieci. Transporting this classic look into the new millennium without copying it was technically complex, to say the least. We had to create a new way of combining the complex aerothermal requirements of the underlying Chiron technology with a completely different aesthetic appearance.”

To do so, Ascheidt changed the entirety of Chiron's front clip to reveal a very “flat, horseshoe” radiator. Extruding toward the wheels are three-finned air intakes, all of which were designed to go with the sleeker Centodieci appearance.

Bugatti’s classic C-Curve has been more seamlessly integrated compared to Chiron, with a far more subtle reference to the iconic design. A point of contention in The Drive office were the new LED headlamps. One camp likes them, the other loathes them. They’re definitely unique pieces of machinery. The most telling example of the car’s homage to Bugatti’s heritage are the twin side-mounted intakes behind the car’s C-pillar. The five, round holes--which form a diamond pattern--are directly plucked from the iconic EB110’s design.

At the hypercar’s rear, nothing has been left untouched. The entire rear is all-new with the “two-pill” taillights that segment and then meet at the hypercar’s midpoint. Extraction holes behind the hypercar’s rear tires flank the large perforated engine compartment, while twin four-pot exhausts resemble futuristic quantum canons ready to take on any Autobot this Decepticon encounters. A vertically-fixed hydraulic wing finishes the design and can adjust for angle of attack.

As you’d expect for a hypercar of its class, the Bugatti Centodieci will be rare. Indeed, it’ll be far rarer than the Chiron as Bugatti plans to build just 10 examples ever. Compare that to the 400 Chirons and you start to understand why the French hypercar manufacturer is asking near-enough $9 million per example. That low production number also means the Centodieci is even rarer than Bugatti’s Divo, which clocked in at $5.8 million, but somehow not as rare as the La Voitore Noire, which allegedly cost the owner $12.3 million.

“With the Centodieci we pay homage to the EB110 super sports car which was built in the 1990s and is very much a part of our tradition-steeped history,” says Stephan Winkelmann, adding, “With the Centodieci, we once again demonstrate that design, quality and performance are just as important.” Furthermore, “With the communication paint finish in white, we're demonstrating a powerful contrast with the La Voiture Noire – the black car just presented in March: two completely opposing yet related forces, like yin and yang.” The car was debuted earlier today at The Quail, A Motorsports Gathering during the famed Pebble Beach Speed Week. As for whether the car is sold out, Bugatti is keeping that close to the vest, but it seems that if you wanted one, your time may have already expired.