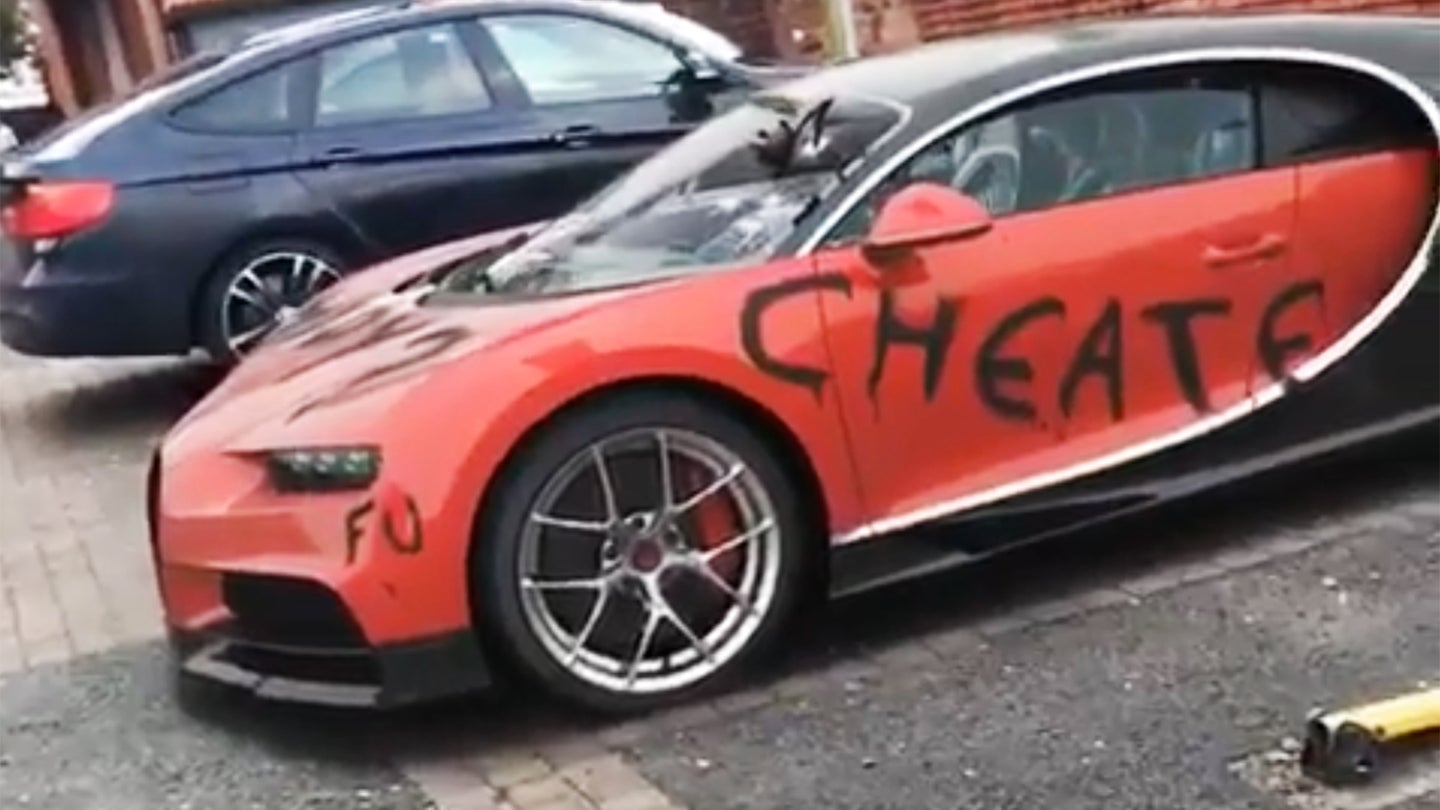 It seems the perfect viral video. A $3 million Bugatti Chiron done in by its owner's hubris and a vengeful girlfriend or wife, the word "CHEATER" spray painted on the side and a stiletto heel through the windshield. It's not every day you see one of the world's fastest cars, let alone in such a sorry state—and it's not today either, since the clip that's been spreading around social media this week is actually a very skillful fake.

Powered by an 8.0-liter quad-turbo W16 engine generating 1,479 horsepower and 1,180 pound-feet of torque, the Chiron has a theoretical top speed of over 300 mph (currently limited to 261 mph due to tire restrictions). It's an elegant cruise missile, full of all the bespoke touches and technological dark magic you'd expect for a $3 million car.

But this video, which appears to have first popped up on Instagram on Wednesday, suggests it can't outrun the passionate anger of a woman scorned. The video shows the red Chiron parked in a nondescript back lot with the words "CHEATER," "FU," and "HAPPY?" scrawled on the extremely expensive paint job. Worse for wear is the windshield, which is cracked in multiple places and still bears the implement of destruction: a stiletto heel.

The man recording the scene sounds shocked, and at first pass his drunken camera work is acceptable as any terribly-filmed viral video. But the swaying is no accident—it's a clever trick to distract the viewer from the fact that not only is the Bugatti Chiron undamaged, it's not even there in the first place. The whole thing is a render.

There are a few obvious clues. The video starts a little too perfectly, with the camera snapping up and sliding into focus in a way that a normal phone camera does not. As he approaches the Chiron, you can see the shadow under the front splitter looks artificial, and the light isn't reflecting off the car in a completely natural way. But it's the windshield that confirms it. That's not how the safety glass in a car windshield looks when its damaged. And besides, do you really think a car that can go 261 mph has a windshield that can be broken with a fancy shoe?

It's not clear who made the render—the Instagram account where the video first appeared lists the source as "?", naturally—but don't let it fool you or anyone else you might see sharing it in the next few days. Sometimes, it really is fake news.