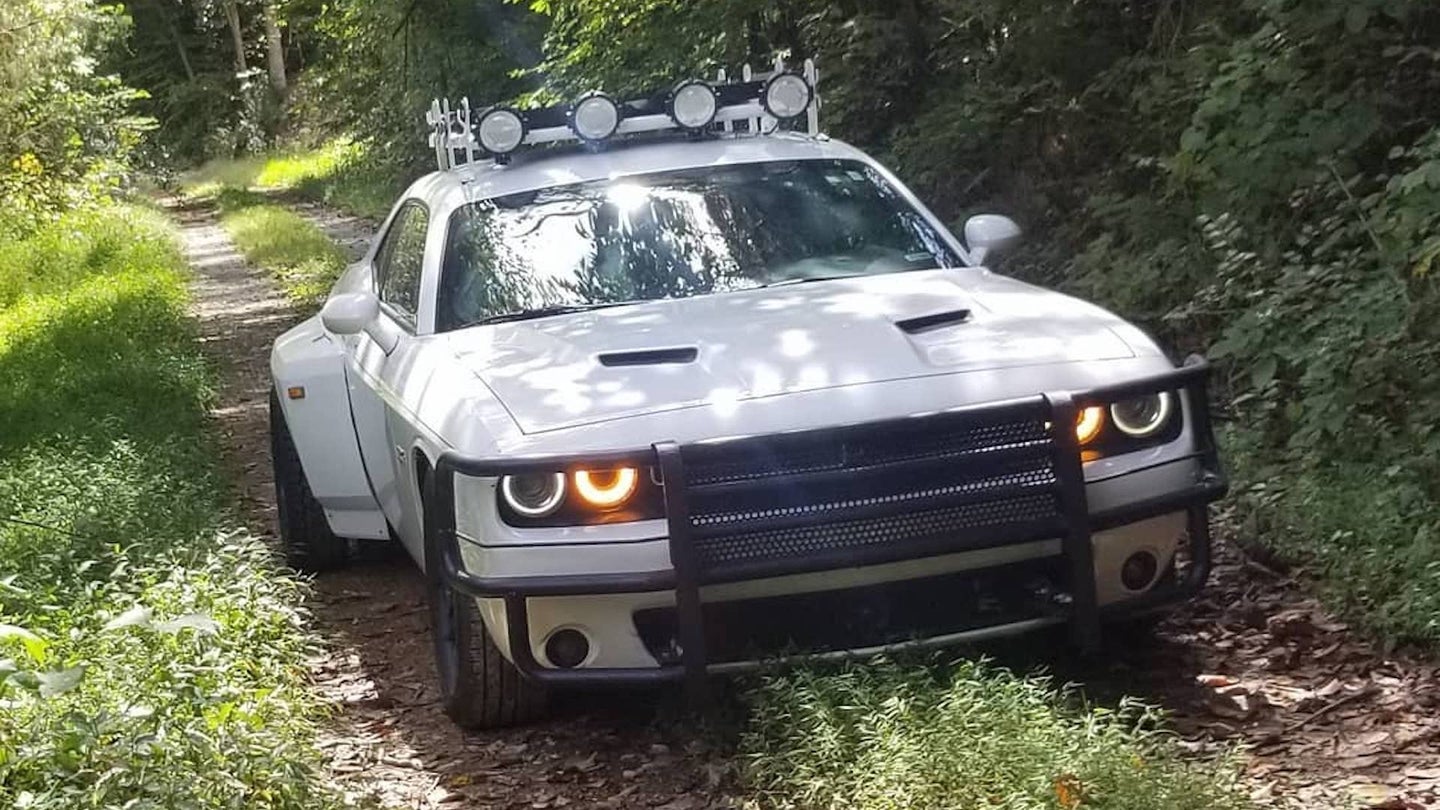 Does anyone else wonder why there aren't more cars that can really tow? Like, what if we want decent looks and performance more than we want a bed, but also to haul a decent-sized camper on occasion? It's a tricky niche to fill, for sure, but it's still surprising nobody seems to have tried in earnest before this guy in Tennessee who's building a dually Dodge Challenger.

This project of Ray's Rides has been made from an almost fully spec'd 2018 Challenger Scat Pack, save for the shaker hood and available manual transmission.

Currently, the builder tells us, the Challenger's rear suspension is a stock five-link setup and the hubs have eight-lug adapters for fitting truck wheels. They're mounted on thick spacers that let the stock rear fender dip between the wheels when the suspension loads up, leaving space for the outer wheels under the '80s Ford F-Series derived fender flares.

"I felt this fender would incorporate the old-school dually fender body style without taking away from the factory lines of the Challenger," the builder told us.

It's just for looks at the moment, but the end goal for this dually Challenger is to be a fully capable truck substitute, which it's already being used for. Its builder tells us he's employed the Challenger to recover vehicles, move projects around his property, and even tow a small trailer, which a Challenger Scat Pack is better equipped for than you might think. Its 6.4-liter V8 produces 485 horsepower and 475 pound-feet of torque, which is more than plenty for a healthy-sized load, and with stock four-piston Brembo brakes, it should theoretically be able to stop safely—so long as he can make it talk with the trailer's brakes as well.

Also, at more than 4,200 pounds, it helps that the Challenger weighs about as much as a truck.

The major weak point is the Challenger's stock 1,000-pound tow capacity, though it's one Ray's Rides plans to address by increasing the max to 8,000 pounds. He tells us that'll require strengthening the chassis and rear subframe, upgrading the transmission, and stiffening the suspension so the Scat Pack doesn't look like it's doing as its name implies.

This could involve a solution as simple as transplanting the rear end from a Durango 392 or Jeep Grand Cherokee Trackhawk, or a more involved one with modern Ram-style rear coils and airbags, affixed to custom control arms. Whatever he goes with, using it to tow 8,000 pounds is sure to get some looks from the highway patrol.

This Dodge's builder hopes that after completing the car, he can sell it and use the money to open a shop to—as he put it—stretch his legs. If all goes as planned, then by golly are we excited to see what Ray's Rides can come up with given more creative liberty. For now, though, it'll just be a fun, unusual daily for the builder and his girlfriend.

"I use it as a daily driver," he continued. "It is mainly just a cool grocery getter and the only adventure she sees is a constant stream of burnouts and donuts."

Prescott Valley Police used a $130,000 state grant for the purchase, and some locals aren’t happy.

It apparently took more than 1,400 hours to build, and the bench seats almost look like sofas.