Listen to the sickening crunch as this Ferrari is dropped hard on the pavement. 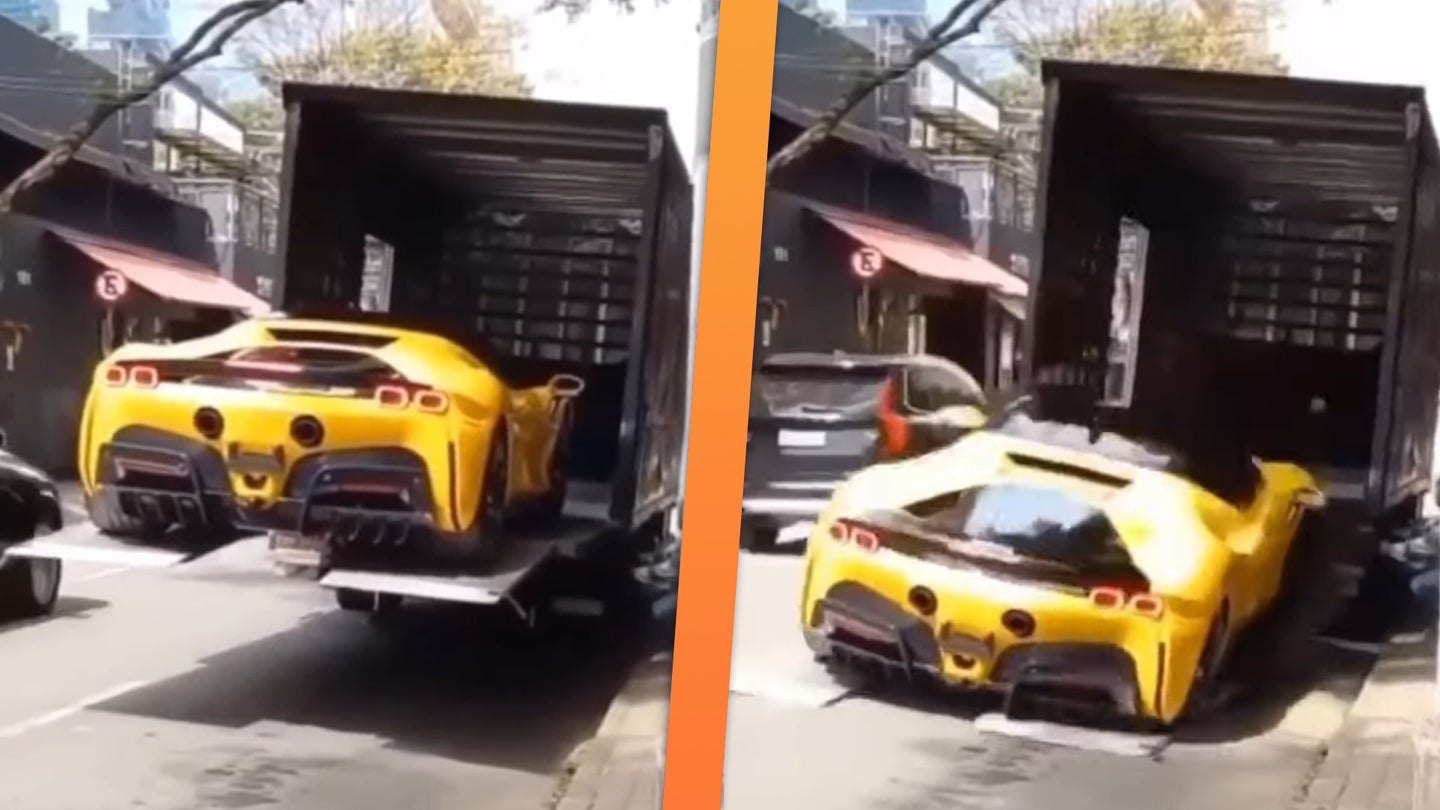 When we think of damaged supercars, our first thoughts often leap to high speed crashes from a lack of talent, or spontaneous fires that quickly destroy a vehicle. However, there's plenty that can go wrong in the transport and delivery of these vehicles, too. One such owner in Brazil found that out, as their brand-new Ferrari was dropped several feet off the back of a truck this week.

As reported by GT Spirit, the incident involved a yellow Ferrari SF90 Stradale belonging to one João Adibe Ramos, the CEO of Cimed Group, a health care company. The vehicle was being unloaded from a box truck equipped with hydraulically-operated ramps. The supercar was reversed on to the ramps, sitting cantilevered in mid-air. From the off, it's clear that the setup is questionable, with the ends of the ramps deflecting worryingly as the car is reversed out. As soon as the delivery driver starts to lower the ramps down, they immediately fail, and the car is dropped on to the street below.

It's not clear exactly why the ramps failed, but it appears they may have been used outside their proper operating conditions. Such ramps are likely intended to be fully lowered prior to loading them with a vehicle. Given the low ride height of the Ferrari, it may not have been possible to unload the car in this manner due to the steep angle involved. This is perhaps what led to the fatal decision that brought the car crashing down.

According to Carro Esporte Clube, the vehicle didn't suffer major damage, and has been spotted driving around São Paulo. If it were our car, though, we'd be having it closely inspected for cracks in the carbon fiber tub sooner rather than later. We'd also be surprised if the front bumper didn't take some scuffing at the least given the way the drop went down. However, it may just be that the car landed on its wheels, hit the bump stops, and survived just fine. It also bears considering the driver that was inside the Ferrari when it fell. They may find themselves with a back injury after that stiff vertical drop.

The Ferrari SF90 Stradale is not a cheap car, reportedly retailing for the equivalent of over $1.5 million USD after taxes in Brazil. Packing 986 horsepower and a 0-60mph time in the realm of 2.0 seconds, it's got the performance to back up the price tag. It just begs the question how such an expensive car ended up being delivered by a truck clearly ill-equipped to handle the supercar.

When all is said and done, we're sure the owner will be able to move past the incident in time. For your own benefit, consider learning the proper way to load a trailer so that your Ferrari doesn't meet a similar fate. Good luck out there.

The vehicle was on its way to Florida in April for another record attempt when high winds in Utah caused its carrier to flip.