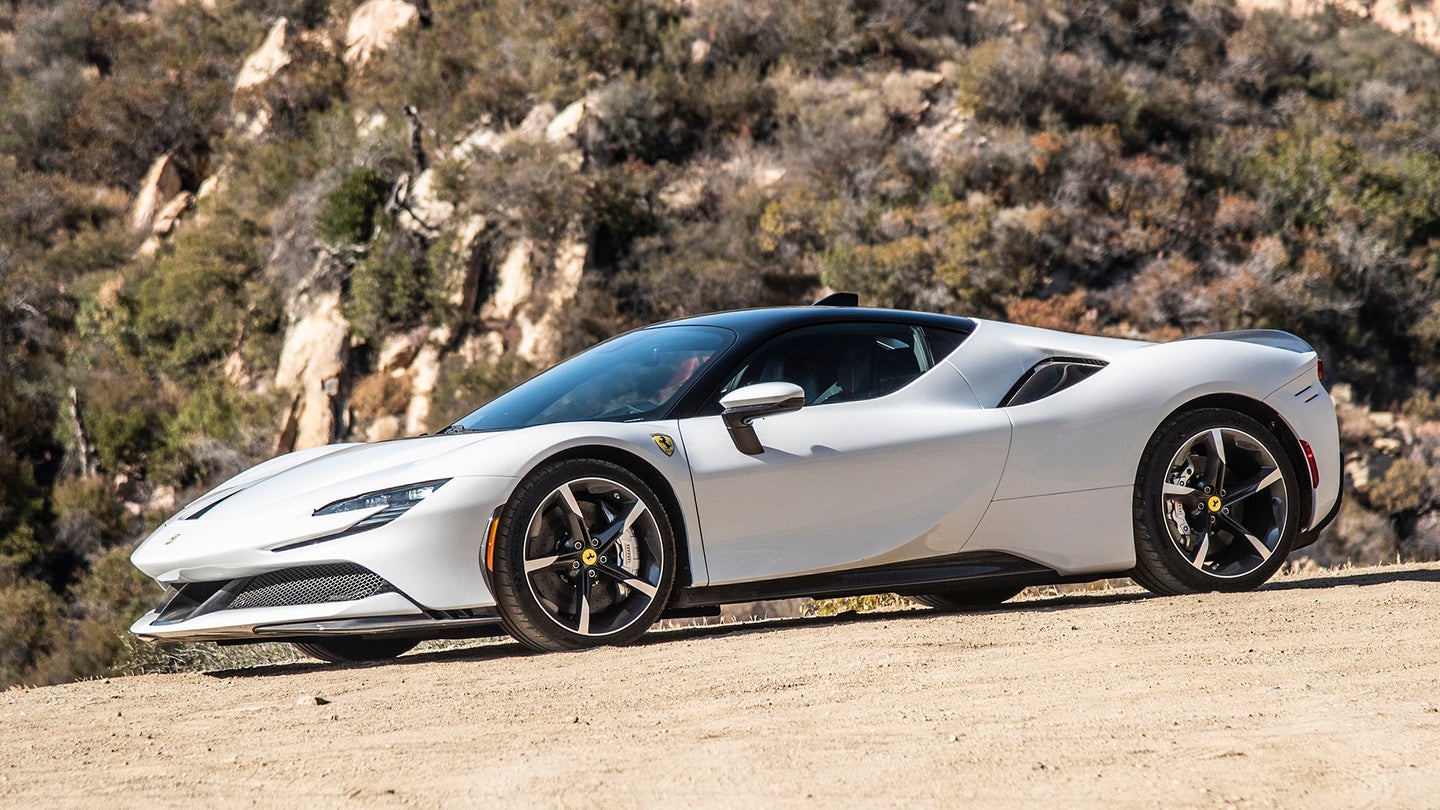 “Careful,” my minder cautions as I wheel onto Stunt Road. Yes, the aptly named route’s lumpy surfaces and spaghettified corners make it notoriously beastly. But so is the 2021 Ferrari SF90 Stradale I’m piloting, which explains why pro driver (and generally nice guy) Mike Borkowski has been assigned to chaperone me on this particular test drive. I’m feeling lucky today, ready to double down on danger; let’s dance.

With its four-figure (metric) horsepower, $507,300 starting price and $700,979 sticker (destinations fees not included), the new SF90 Stradale looks positively mental on paper. But this latest specimen also claims enough firsts to make it arguably the most important prancing stallion of the decade.

Not only is this Ferrari’s most powerful road car yet, it’s also its first all-wheel drive sports car, first-ever series production plug-in hybrid, and only ‘rari capable of traveling entirely on EV power alone. The SF90 also lays claim as the only V8-powered model positioned above top-of-the-heap V12 specimens like the 812 GTS and the first time such a flagship example won’t be limited in production numbers. Strange days indeed. 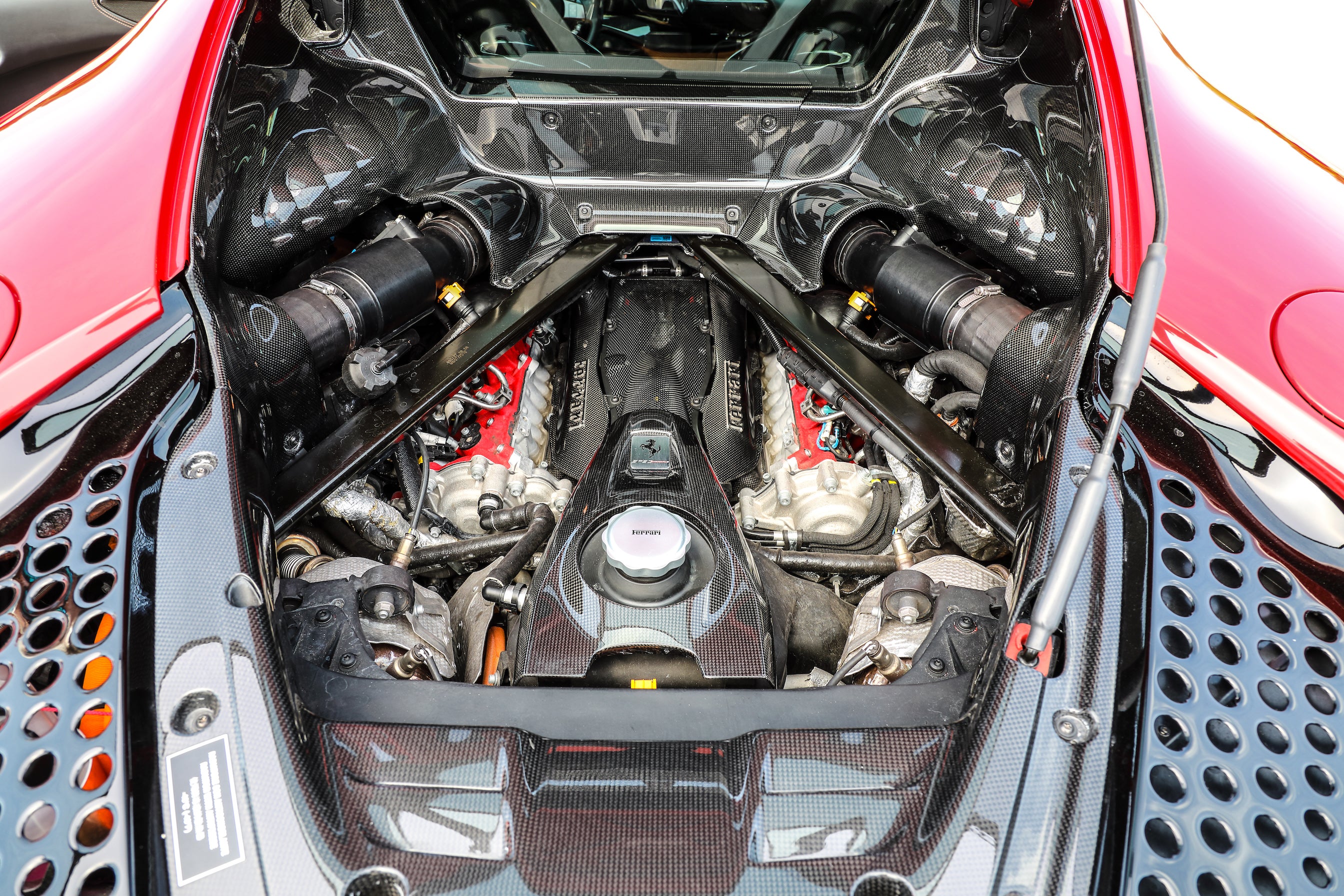 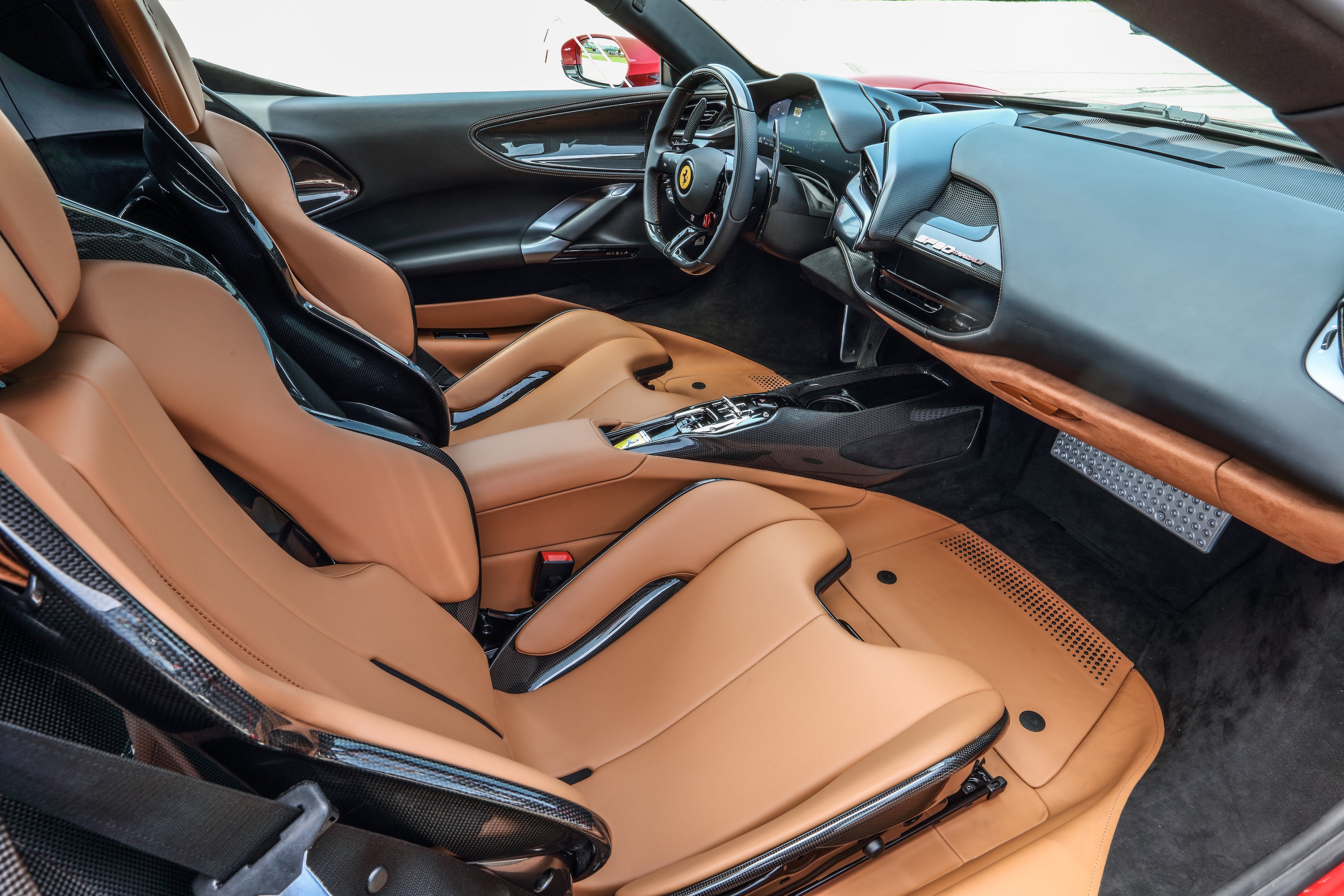 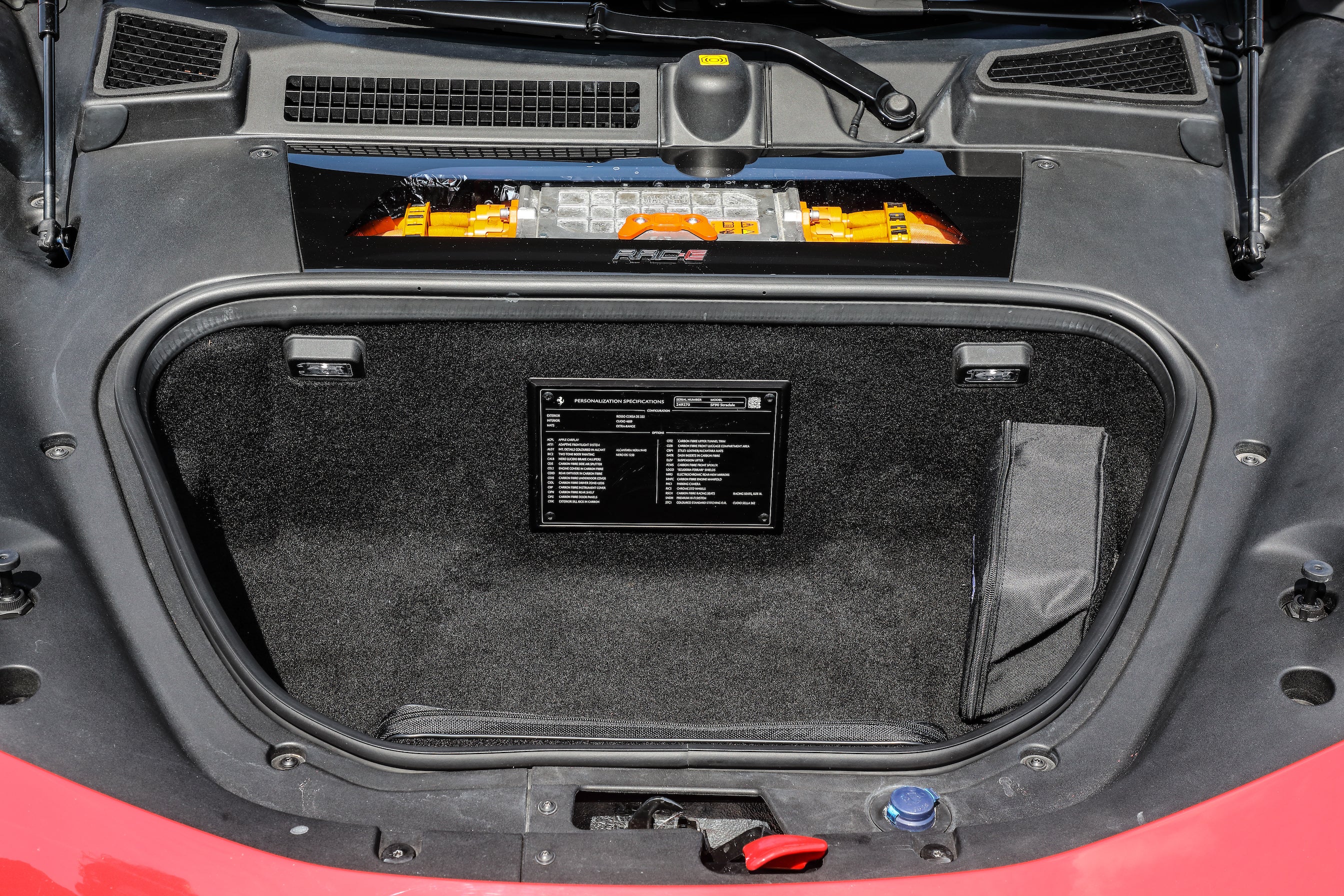 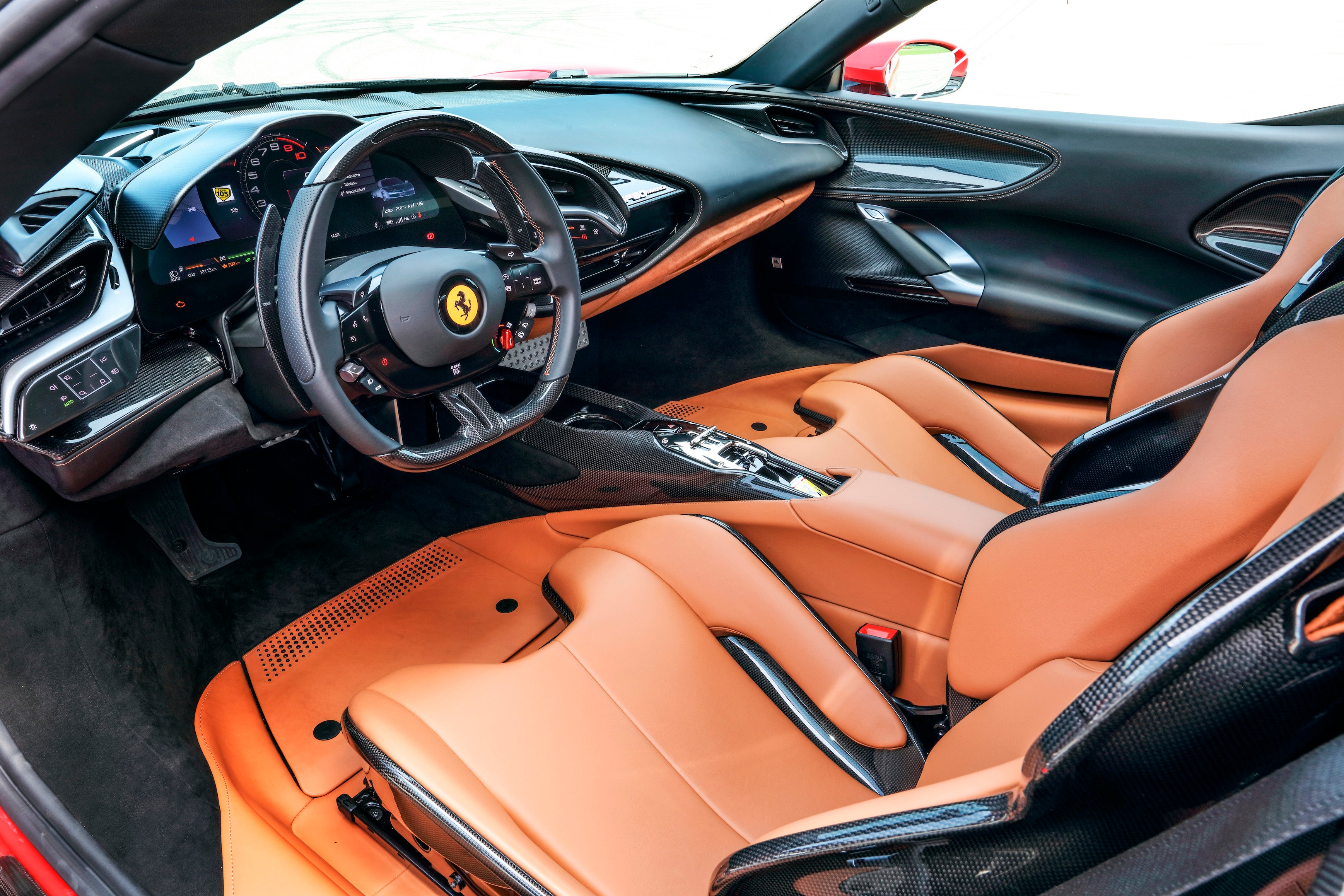 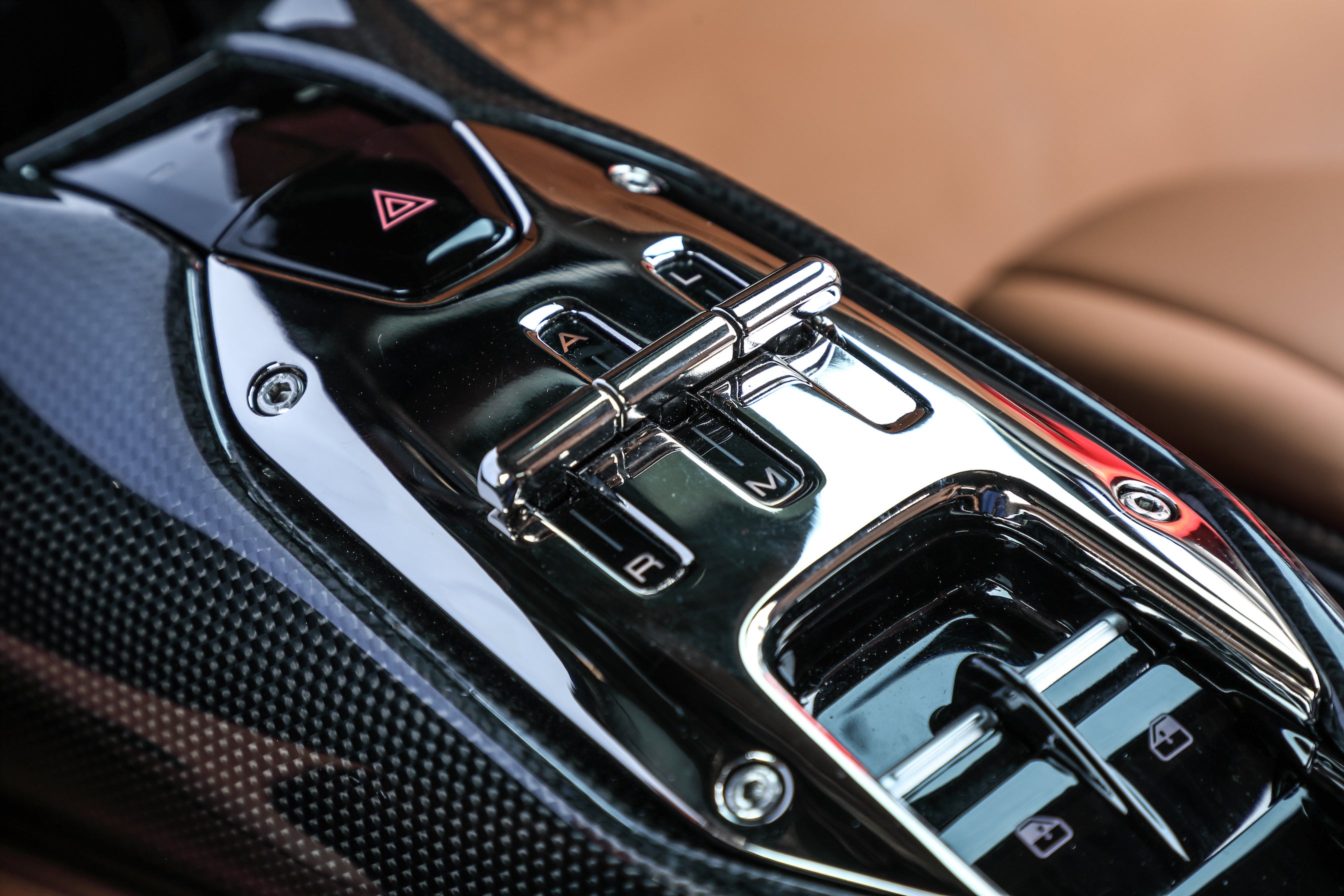 Exiting a Pit Lane in the Rain

Hitting Stunt on dusty Michelin Pilot Sport Cup 2 tires from a turnout is like exiting Le Mans pits in the rain. At least for these first few hundred feet, the power-to-grip ratio is off the charts. Like the Roma, the SF90 fires up with a capacitive Start "button" at the bottom center of the steering wheel which, along with the smooth, haptically-actuated left side of the steering wheel, does not do justice to the car’s mechanical soul.

What it lacks in tactile satisfaction, it makes up for with the cabin-filling hum of the 4.0-liter twin-turbo V8 that’s only a carbon-fiber firewall away from your unsuspecting ears. The powerplant’s bore has increased to 88mm from previous 3.9-liter duty in the F8 Tributo, with larger turbos and revised intake and combustion tactics helping boost output to 769 HP and 590 pound-feet of torque.

Compared to the F8, the 8,000-rpm engine jettisons 55 pounds of weight, has a more squashed profile, and sits lower in the bay for an advantageous center of gravity. The eight-speed dual-clutch gains a forward gear but loses reverse, which is now handled exclusively by the dual front electric motors. The two powertrains can vector torque for sharper rotation, while another rear motor helps with corner exit, bringing the total electric output to 217 HP and 321 lb-ft. Notably, the hybrid motor, 7.9-kWh battery, and related hybrid systems add 595 pounds of mass, resulting in a total dry weight of 3,461 pounds. 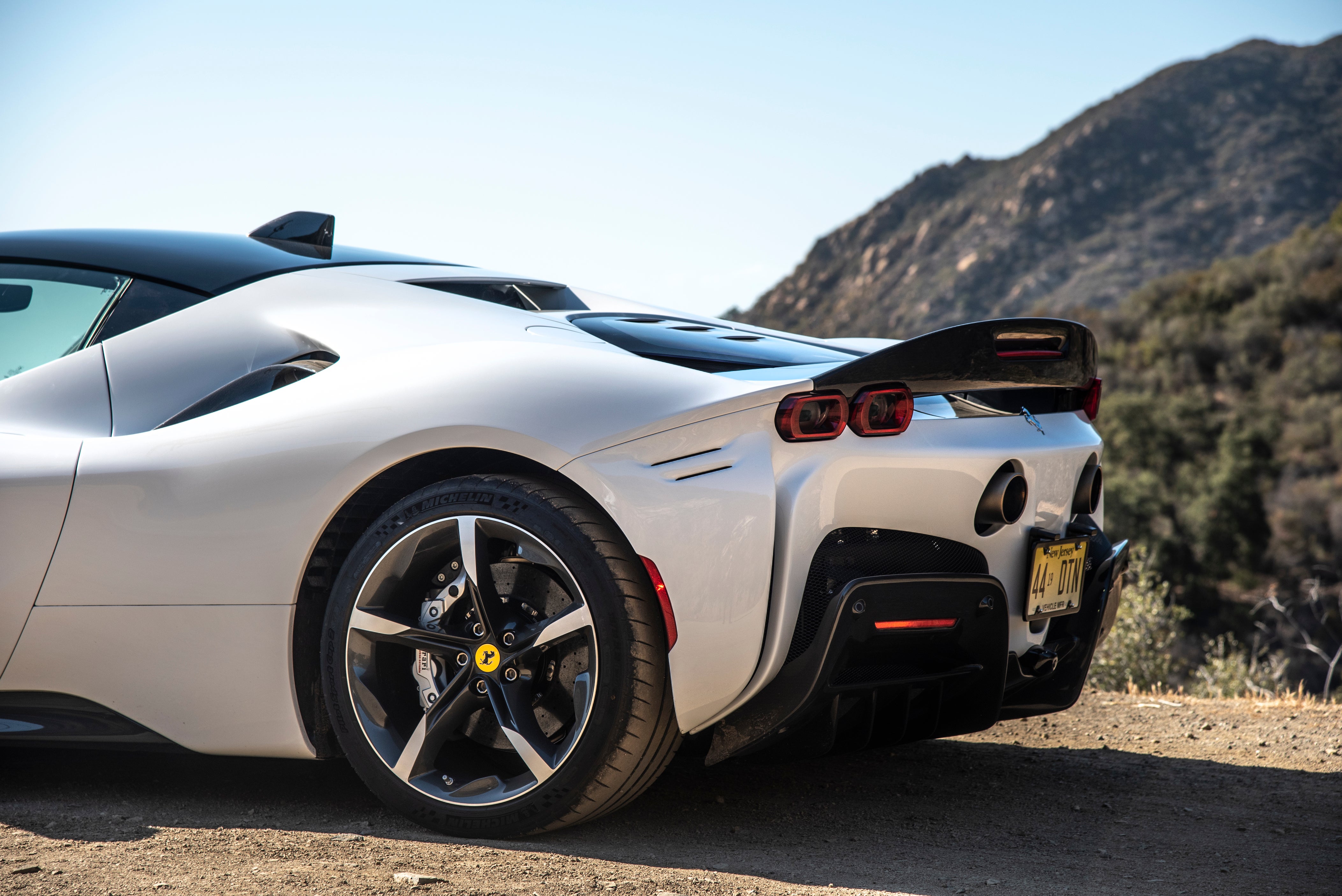 While significantly heavier than the F8 Tributo, the SF90 more than makes up for the difference with power-to-weight ratio. The electric enhancements and all-wheel-drive enable zero to 62 mph in a claimed 2.5 seconds, a top speed of 211 mph, and perhaps more significantly, a Fiorano lap time that’s a hair quicker than the mighty (and mighty rare) LaFerrari. Aiding the chassis, which is an evolution of 488 GTB/F8 Tributo’s underpinnings, are aluminum and carbon fiber upgrades for stiffness and NVH reduction.

Back to Stunt Road

Once I’m certain the tires are properly scrubbed and warmed up, dipping into the throttle thrusts the SF90 forward with instantly responsive, lag-free immediacy. Between the quick-spinning turbos, the transmission’s extra gear, and torque fill from electric motors augmenting all four wheels, the Ferrari manages to overcome any of its predecessor’s perceived accelerative inadequacies with startling immediacy.

The Stradale Ferrari loaned me is equipped with the $56,240 Assetto Fiorano package, which adds a layer cake of go-fast goodies including fixed dampers and titanium springs by Multimatic, titanium and Inconel exhaust system, Lexan engine cover, and carbon fiber swathing everything from the intake plenum to the hood, bumpers, seat, trunk, spoiler, and even wheels. Yes, it’ll nearly set you back a BMW M2. But considering the added exotic materials, 66 pounds of weight savings, and increased downforce (859 pounds at 155 mph), I'd argue it’s well worth the extra coin.

The suspension damping feels dialed precisely into the road, creating a communicative interface between the seat of your pants and the pavement below. The chatty sensations would be impressive in any hypercars, but they’re particularly remarkable in the SF90 because they involve so many differing systems: a wailing internal combustion engine mated to a dual-clutch transmission assisted by torque-vectoring front motors and another one at the rear, not to mention brake-by-wire stoppers and active aerodynamics with a shut-off Gurney flap.

Like the late, great Porsche 918 Spyder/McLaren P1/Ferrari LaFerrari holy trinity (not to mention less exotic strains like the Acura NSX), there’s a dizzying symphony of electronics at work. But they cooperate to mask the complex systems, seamlessly pulling the car through corners and making it feel taut, responsive, buttoned-down, and wickedly fast.

Given the common-sense limitations of driving ludicrous speeds on public roads, I resisted the lure to explore the upper edges of the SF90’s considerable capabilities—isn’t that what race tracks are for? But given its remarkable composure over Stunt Road’s bumpy and off-camber bits, the chassis is clearly communicative enough to inspire higher levels of confidence on the road than most drivers can handle, and probably—apart from a slightly less-than-organic brake-pedal feeling—enough to make it a formidable track weapon. 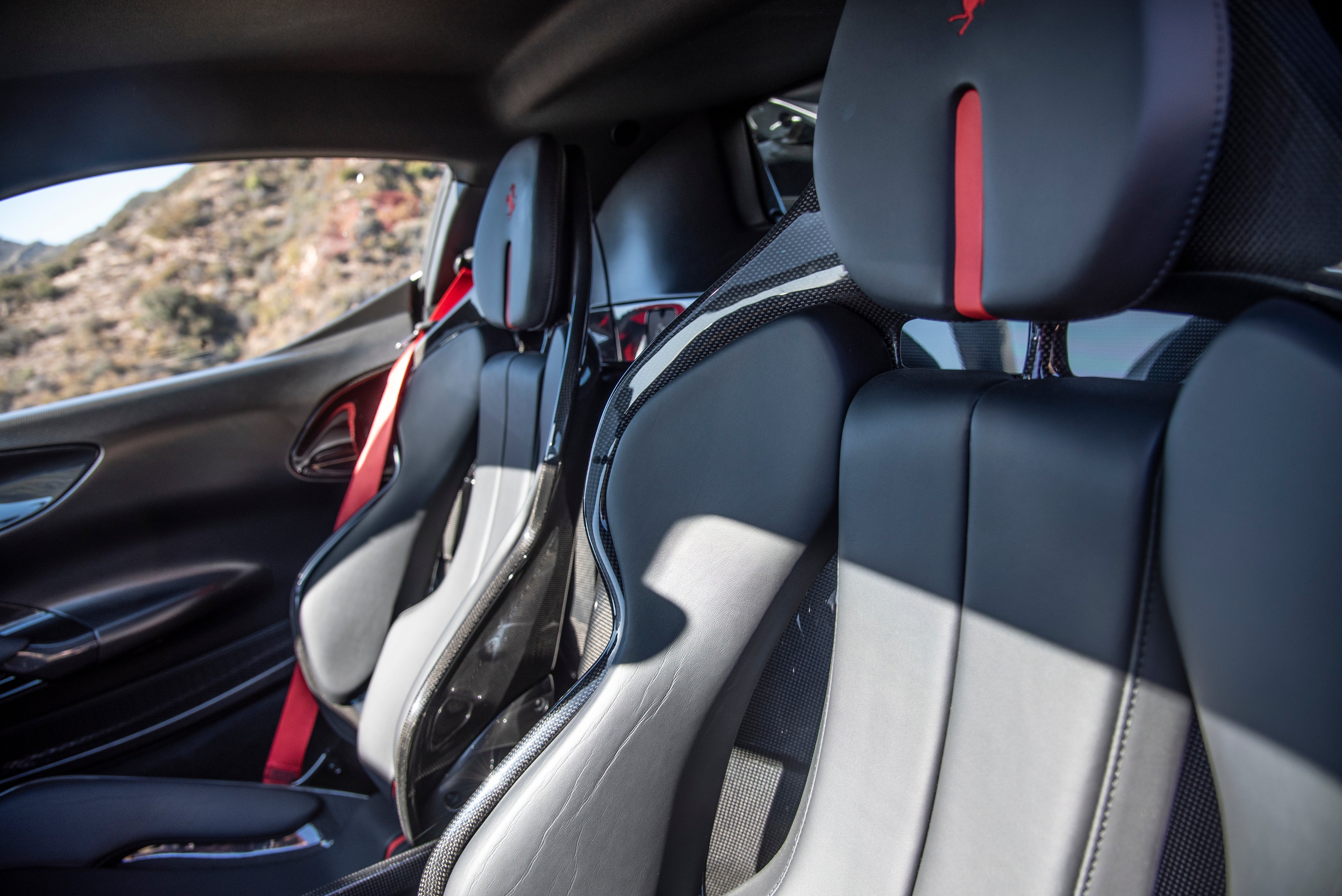 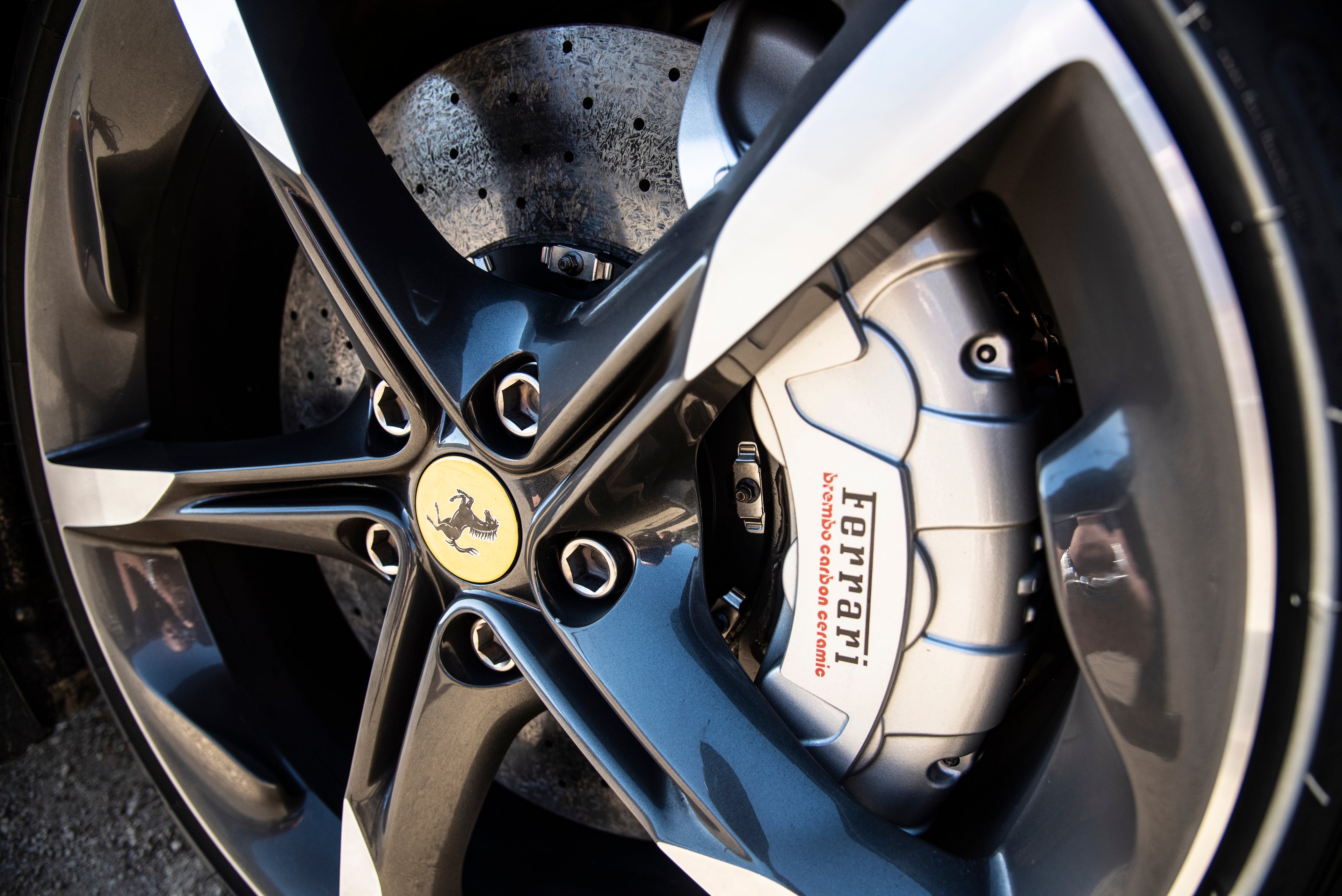 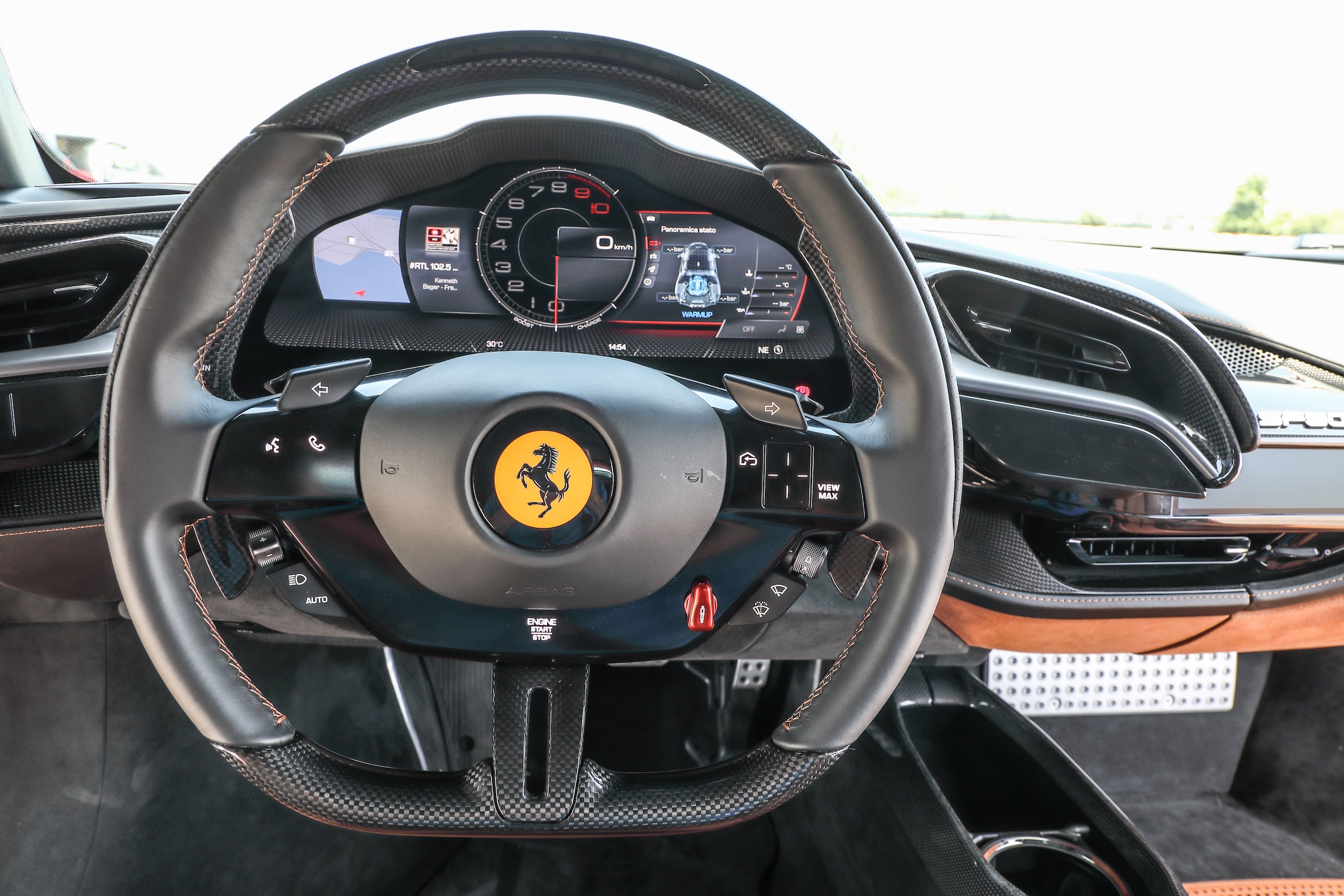 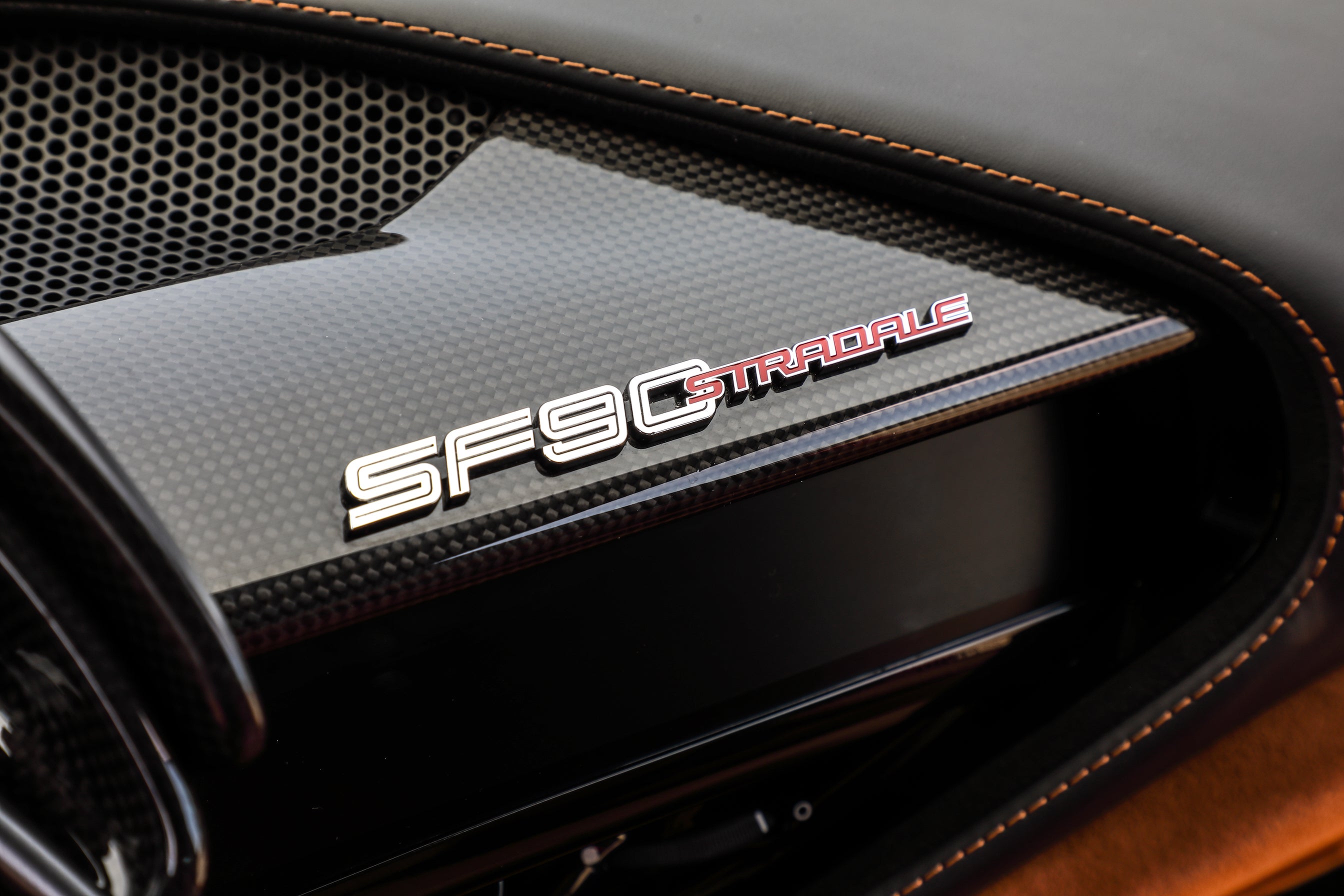 Brain buzzing from the bonkers canyon jaunt, my chaperone and I finally descended to the controlled chaos of city roads, where LA drivers engage in the semi-civil (but often savage) game of jousting for gridlock supremacy. The SF90’s silhouette—somewhat evocative of its 458 and 488 forbears, but with jaunty touches that distinguish it from ts earlier evolutions—still swivels heads. But more significant than appearance is the ability to drive in pure electric mode for up to about 16 miles at speeds up to 84 mph.

Until this point in history, to pilot a wedge-shaped creation from Maranello meant the mandatory hum of an imperious V8 or V12 engine and all the incandescent emotion that comes with controlled combustion. This time, we were gliding quietly in front-wheel drive but could summon the glorious V8 at the touch of capacitive sensor or the dial of a Manettino. Chew on that, tifosi.

While it does bask in the usual Modenese trappings—smoldering style, the juicy reverb of a V8 exhaust note, the irrefutable, gawk-drawing cachet of the prancing horse—the SF90 doesn’t command the visual shock-and-awe of past range-toppers like the big-winged F40 or the insectoid LaFerrari. But disappointments with regard to the fact the SF90 isn’t an ultra-extreme one-off limited to 500 or so of the world’s billionaires can also be countered with the concept that this might be the most capable (and democratically-tilted) half-million-dollar car in the history of wheeled transportation.

Come for the V8 and preternatural handling, stay for the grand unification of electronics and internal combustion. The future’s so bright you’ve gotta wear Persols.