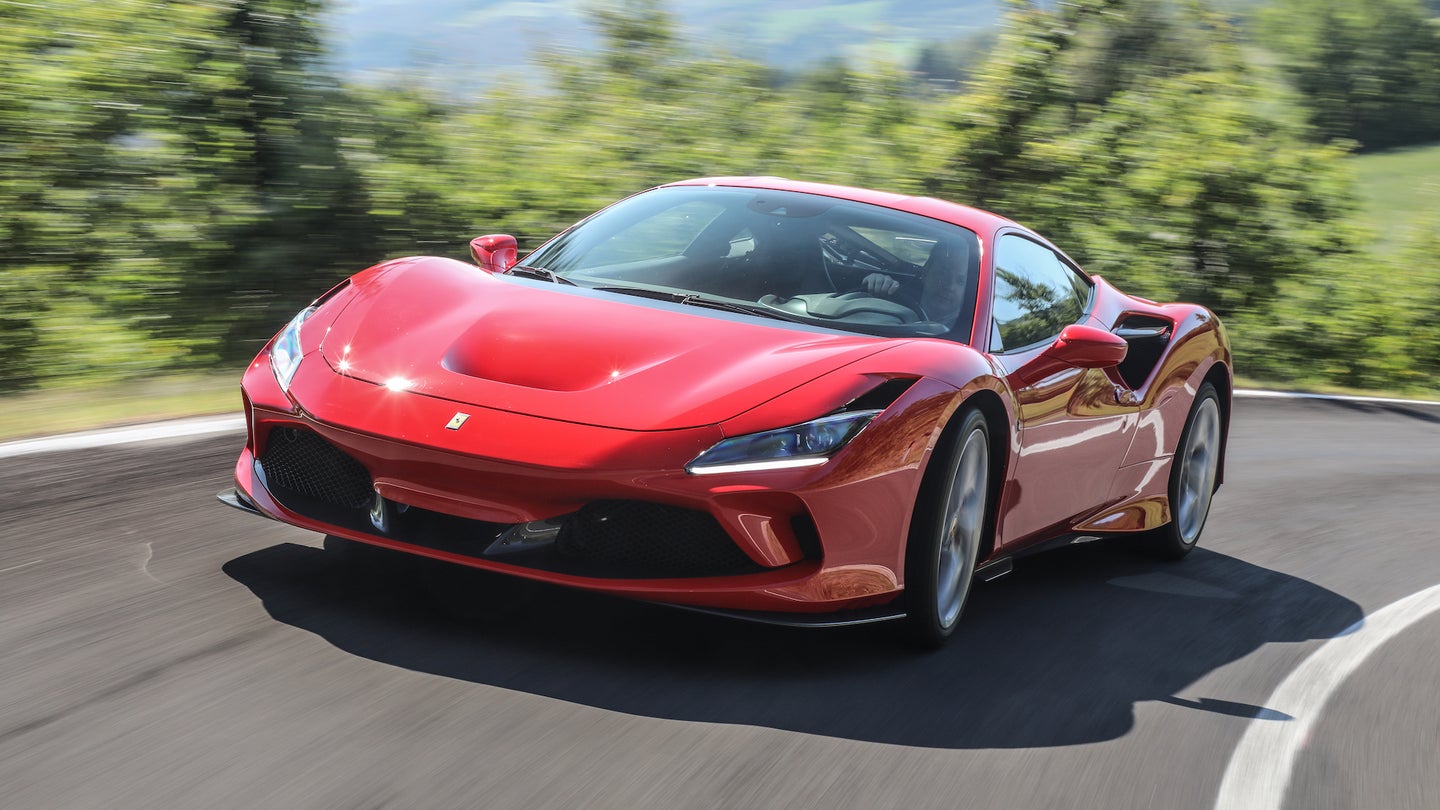 Anyone who tracks Ferrari’s release schedule with a Holmesian eye for detail will recognize the 2020 Ferrari F8 Tributo as a head fake—an update of the 488 GTB arriving mysteriously off-cycle. By Ferrari’s traditional product timeline, the F8 should be an all-new model, not a refresh, but company reps insist its new ethos is unpredictability, so get ready for more off-book decisions from Maranello.

Not that we’re complaining. The F8 Tributo offers a leap in performance and attitude over the GTB. Anchored by a volcano of an engine ported over from the Pista—last year’s hardcore 488—it’s a thrilling all-rounder with superb ride quality and steering feel, a sparkling chassis, gorgeous noises, and astonishing top-end performance. I’m wracking my brain to recall another technical refresh that’s produced such vivid results and can’t come up with one. Very unpredictable indeed, Ferrari.

In name, the F8 pays homage to all V8 Ferraris going back to the 308 GT4 Dino. From behind the wheel, the F8 scans as the ultimate expression of the company’s mid-engine architecture introduced with the 458 Italia; the platform that gave the V8-powered Ferrari its greatest successes in GT endurance racing and provided the toolkit for the primal 458 Speciale, a high-water mark for all sports cars, ever. A special tributo might be fitting for that alone.

Either way, the F8 eclipses the 488 in ways both academic and visceral. On the theoretical side, it’s 88 pounds lighter than the 488 GTB and continues the platform’s incremental march toward aerodynamic duplicity: less drag and more stability-enhancing downforce. Notably, the intakes moved from the side pods to the rear deck, where they flank a blown spoiler. The result is improved airflow to the engine, while pushing the F8 downward at speed without introducing the same degree of drag a large wing might. The yin-yang aero tradeoff continues with the front S-duct, an active rear diffuser flaps that stall at high speeds to improve air-slipperiness, and underbody vortex generators that add one-quarter of the total increase in downforce.

In the visceral column, the F8 improves on the 488’s voice in both sound quality and volume, with a new resonator tube transmitting rich flat-plane crank noises into the cockpit. Burbling along the autostrada outside Maranello in top gear, the 3.9-liter turbocharged V8 practically whispers the bass line to Pink Floyd's "Money." Drop three gears and floor it, and that reciprocating hunk spins up and discharges a buzzsaw symphony as Italian as anything out of Puccini’s notebook.

In a flash, computers calculate the most efficient means to put down all that motive force, and the F8 launches forward like a Cold War interceptor. Ferrari’s sublime V8 produces a massive 710 horsepower at 8,000 rpm and peaks at 568 pounds feet of torque at 3,250 rpm. Later, around Ferrari’s Fiorano test track, the F8’s throttle response shines brightest. Unmatched among turbo cars, its flexible engine provides pinpoint control.

Compared to the GTB, this build of Ferrari’s F154 V8 has a higher cam lift, and with lower rotating mass and less inertia from lighter-weight elements, including flywheel, crank, and connecting rods. Weighing less than even the Pista’s version, it spins up to impressive heights without delay. As a technology stack, the Ferrari V8 is a marvel, and its usable torque also makes for a road trip sweetheart. Like other versions, this build also employs software controls to vary turbo boost and fine-tune specific torque output in each gear.

A tremendous degree of force builds right up to redline, as engineers created a hard-stop “wall effect” rather than phasing in the rev limiter as redline nears. Zero to 60 comes in 2.8 seconds, zero to 124 in 7.6 seconds. Top speed is 211 mph. That rapidity is achieved through Ferrari's seven-speed dual-clutch transmission and a new build of its e-diff.

The sexy numbers provide a dramatic, but incomplete picture. The F8 is undeniably sharper than the GTB despite having the same chassis. Engineers say it's all in the new calibrations. The front end feels like it was designed for a Kung Fu movie, light and quick to change direction, but with knife’s-edge precision and eons of mechanical grip (the Fiorano track-test cars had the ultra-grippy Michelin Pilot Sport Cup 2s; the road-drive cars, the more comfortable Pirelli P-Zeros). The GTB's adjustable magnetorheological shocks, still one of the best inventions in chassis tech (thanks, Delphi), continue to provide that elusive combination of body control and ride quality in the F8.

The F8 Tributo pushes not only the absolute performance envelope, but also expands the usable envelope of performance beyond what an amateur driver could manage in the 488. The latest version of Ferrari Dynamic Enhancer (FDE+) benefits from faster processor speeds introduced with the Pista, along with software and calibrations updates that make it available in Race mode, where the system incorporates steering, braking, and e-diff settings to dial in an unmatched degree of margin and transform a driver’s inexperience into quicker lap times.

Roll out of a slow corner in second gear, drop the hammer, and any driver with the slightest inclination to countersteer can catch and hold garish powerslides. The latest version of the software can activate with less steering angle than the previous version, varying the degree of opposite crank based on throttle position and yaw angle. Turn off traction control and the ballgame changes dramatically. That’s where the really good drivers earn their drifts.

While largely designed by wind tunnel, the stylists at Centro Stile found a few spaces in between the aero demands to express new design elements. The F8 marks the return of the V8 Ferrari's quad taillights, which should never have left. A Lexan rear window, while a fitting tribute to the turbocharged, V8-powered F40 supercar of the 1980s is cool in the abstract, but pinches and distorts, making every car in the rear-view mirror look like an old Citroen. Inside, a new cabin design feels both spacious and snug, with seats that are among the most comfortable and supportive available in a road-driven sports car. The latest navigation system is quicker and less prone to notorious lag times in turn-by-turn directions, which have sent unwitting journalists hurtling down the wrong roundabout exits outside Maranello for at least a decade.

Whether the F8, which arrives a mere four years since the GTB’s debut, marks the beginning or the end of an era (a transition to a wider scope of hybrid-electric powertrains, perhaps)—or just a response to intense competition in the super-sports-car category—misses the point. The point is that by improving in a few areas, Ferrari has elevated the F8 into the realm of legend. Who would have predicted it?