The Ferrari GTC4Lusso Is Fast, Ferocious, and Close to Perfect

The best all-wheel-drive car in the world just got better. 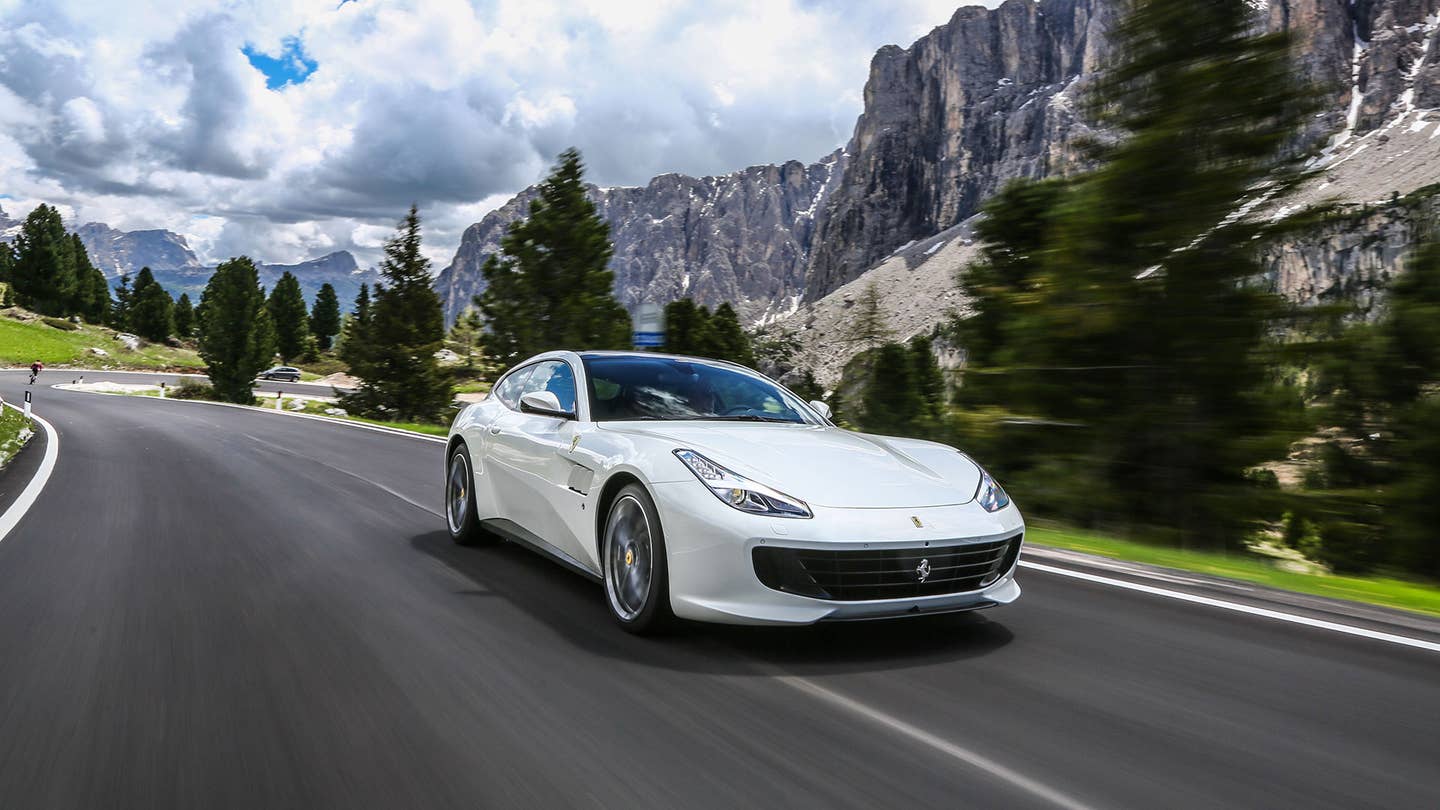 There are people out there who will hate the Ferrari GTC4Lusso. Can you believe that? These people are fanatics of the worst kind, loathsome lackeys who bow at the altar of mid-engine two-seaters and scorn all others. It's a sad life, one devoid of beauty, and of backseats. When Ferrari unveiled the GTC4Lusso's predecessor, the exquisite FF, in 2012, Ferrari fanatics leaned away in disgust as though it was a festering rind of casu marzu.

The GTC4Lusso is Ferrari's brand new shooting brake, a two-door four-seater that emerges from a factory line in Maranello that has produced some of the most valuable and objectively beautiful grand touring chassis ever made, starting with the 250 GT in 1960. Since then, we rabble have been given the gift of the the 550 Maranello, the 365GTB4, the incomparable Ferrari 456—the list is long.

Because I’m a self-imploding contrarian, I’m tempted to say what I find most beautiful about the dynamic, $300,000, V12 powered GTC4Lusso is that the fanatics—those overly-perfumed, eyebrow-plucking peacocks who tend to have tiny feet—will dislike it immensely. All wheel drive? Get outta here. Back seats? Engine in the front? Afanabola, you pazzo son of a bitch.

But in the final analysis, after spending a scorching day launching up winding Tyrolian mountain roads and then power-luging back down, loathing for Ferrari militants floated to the bottom of my list of reasons to love the GTC4Lusso. The car, it turns out, is spectacular on its own merits, an improvement over the already fantastic FF: It's faster—that’s 3.4 seconds 0-to-60 fast—with more refined, sexy, confident lines, and a cockpit so precisely cut and comfortable it beckons me to keep flogging long after the twisting mountain roads have tired out my eyes.

The GTC4Lusso is not merely an update of the FF. It has a wider stance and sits a couple centimeters lower to the ground, yet feels more agile, with added and revised design elements that make the car appear lighter on its feet. And while it has a similar all-wheel-drive system from the FF powertrain, the GTC4Lusso is really a Ferrari tech supergroup, poaching the sweetest bits from across the Ferrari family line. It takes the FF’s AWD system but also incorporates the F12tdf’s way-cool rear-wheel steering system, which works in phase with the front axle to improve high-speed stability in turns. The GTC4Lusso also blends in a fascinating update of the 488 GTB’s Side Slip Control system, which stabilizes car’s dynamic behavior in corners and on rugged tarmac. Like much about this spellbinding car, the SSC uses magic to keep the car planted.

And so I step into a TDF-blue GTC4Lusso and fire up its 6.3-liter F140 V12. When it was originally birthed 14 years ago in the bay of the mighty Ferrari Enzo, the F140 was the most powerful naturally-aspirated engine ever made. It then found its way into the 599, the F12berlinetta and F12tdf, the FF, and the LaFerrari. In the GTC4Lusso, it produces 690 horsepower at just under 9,000 rpm—a touch less than the F12tdf, but with just as much pleasing savagery. When I fire it up, I can feel that deep well of might, with a powerband wider than the Mediterranean Sea, ready to be summoned at any moment, in any of the 7 gears.

The interior of the GTC4Lusso is . . . well, it's perfect. The wheel is adorned with Ferrari's staple buttons and dials, controlling the blinkers, windshield wipers, headlights and performance control settings that include sport, comfort, and heavy weather. And the GTC4Lusso is the first Ferrari to introduce a "dual cockpit" interior, which means the passenger has his own 8.4-inch digital screen that can control the climate and radio, or show the speed, revs, and gear selection in real time. One of Ferrari's engineers told me the passenger display is a special point of pride, because "it lets the copilot have the same dignity as the driver."

Out on the road, the early summer traffic is light, but the Tour De France Blue proves an apt color because the winding roads, which switch back and forth over 3,000-foot mountain passes, are congested with bicyclists training for the Tour de France. I'm hard on the throttle in the short straights, the F140 lighting up through the gears, with that V12 howling, and then hard on the massive carbon brakes as I get into the turn—just in time to avoid a careering line of bikers drafting at speed out of the corner.

To test that powerband, I shift up to 7th gear on an incline, and at 1,750 rpms I open the throttle, unleashing a burst of power that you simply can't get on a turbocharged engine. When I have space to push the car through the corners at something like a high speed, the actuators that steer the rear tires turn slightly, helping whip the heavy nose into the turn. It's a ballet dancer with back seats.

While people will naturally compare the design with the FF, the GTC4Lusso’s true ancestors are the earlier grand tourers, especially the sublime 456, a 2+2 designed in the early 1990s by the great Pietro Camardella and Lorenzo Ramaciotti at Pininfarina. Like the 456, the Lusso has quad taillights, the first set in a Ferrari since the 612 Scaglietti. The taillight panel is ripped right from the rearview of the 335, the 456, and the 308—a supple rectangle devoid of fussiness—and the gills behind the front wheels are a refreshing echo of an old Ferrari GT signature. To my eyes, there isn't a single unnecessary contour or adornment on the GTC4Lusso.

Building on the FF's very solid side view, Maranello's designers have introduced a line that reaches from the bottom of the front door and rises gradually before racing to top of the rear wheel well. Ferrari calls it a "Diapason," whatever that means, and its effect is to lift the eyes, to make the car seem lighter than its 3,946 pounds, and certainly more athletic than the FF.

The GTC4Lusso is no LaFerrari. Instead it's comfortable, confident, a thing of beauty and a throwback to a time when a Ferrari wasn’t a dick-size-or-bust sports car Megatron. After all, Ferrari at its heart is about a completely unreplicable combination of speed and beauty. And while speed is a problem that can always be solved, beauty is voodoo, intangible.

The haters will always be there, waiting fiendishly for Ferrari's next great mid-engine sports car. Until then, I'll enjoy the voodoo.