Ferrari vs Lamborghini: The Battle of the GT3 Race Cars

On Ferruccio Lamborghini’s birthday, a look at new race cars from both factories—and a renewed rivalry. 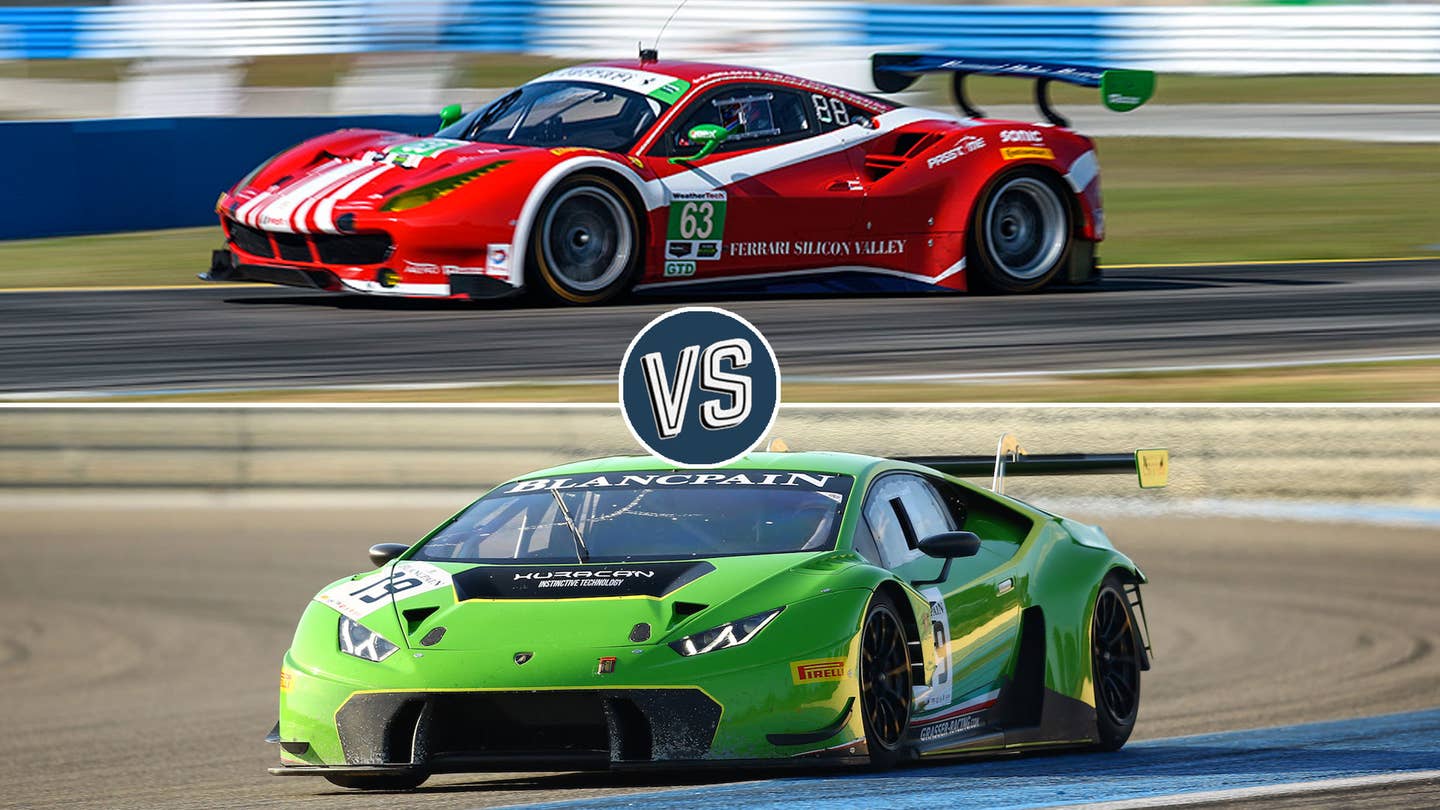 The meeting is the stuff of automotive legend. Ferruccio Lamborghini, a wealthy tractor and air-conditioner maker in Sant’Agata Bolognese, Italy, approached Enzo Ferrari, whose factory was in nearby Maranello, about a problem with a Ferrari car, circa the early 1960s. Ferruccio was upset over a busted clutch in his Ferrari, the story goes. The conversation went like this (these are direct quotes, we swear):

Ferruccio: “This car is a piece of shit, Enzo. Fix it!”

Ferrari: “This is a Ferrari we’re talking about! Eat it, you tractor-making swine.”

At which point, Ferruccio set off to build his own car to stick it to his Italian rival, hiring ex-Ferrari engineer Giotto Bizzarrini to head up the project. The Lamborghini 350GT debuted soon after at the 1964 Geneva Auto Show, and the grudge match between these two Italian companies has captured the imagination of gear heads ever since.

This year marks a special time for Ferrari and Lambo fans in North America. Both companies have unleashed new racing sports cars that are waging war on our circuits for the first time, notably at this weekend’s Continental Monterey Grand Prix at Mazda Laguna Seca. These are factory built, customer cars for privateer teams. By privateers, we mean world-class sports car racers with the kind of capital to purchase serious machinery. Which brand of car will come out on top this weekend—Ferrari or Lamborghini? That question is almost as interesting as this one: If you had the kind of kale to purchase an Italian racecar to compete professionally in the GT3 class, which would you choose, the Ferrari or the Lambo? Let’s take a closer look.

Ferrari has launched two racing cars off its flagship 488 GTB. The 488 GTE competes in the World Endurance Championship in the LMGTE-Pro class. Basically, it’s built for Le Mans, for the top GT teams in the world. The 488 GT3 is for GT3 class racing, what is called GTD in IMSA here in America. (If you’re confused, you’re not alone.) Basically, the GT3 is the racing car that mortals can buy and compete in, if said mortals are seriously rich. The Ferrari 488 GT3 is also the car that Lamborghini’s Huracán GT3 competes directly against, and thus the car we’re talking about here.

The Ferrari uses the same 3.9 liter twin-turbo V8 that’s in the 488 road car, only it’s race tuned, kicking out 600 horsepower and 515 ft/lbs of torque. The car is born on the main assembly line at the factory in Maranello, then it’s finished off in racing trim at Michelotto, a shop in nearby Padua. Like all race cars, this one has been enhanced with a variety of aero features, and the interior is all business. The car was unveiled by Ferrari at Mugello, a track in Tuscany, late last year.

Ferrari has released little info about this GT3. The price is a mystery to all but the few who have bought one, but conservative estimates would be about a half million. This much we know for sure: It was not ready to compete in the Rolex 24 at Daytona, IMSA’s opening salvo. So it made its debut a few weeks later at the 12 Hours of Sebring, where it qualified on pole and won the race in class. The closest Lambo Huracán GT3 finished six spots behind. The winning Ferrari was driven by the Scuderia Corsa team’s Christina Nielson (Denmark) and Alessandro Balzan (Italy), who will also pilot the car in this weekend’s race at Mazda Laguna Seca.

This machine’s debut in North America is in a sense more exciting than that of the Ferrari. Since its founding, Lambo has shunned racing as a marketing tool, preferring to market cars through sheer styling audacity and performance. Pressure from parent company Volkswagen, starting back in 2013, moved Lambo to produce a customer racecar, the Huracán LP 620-2 GT3, which debuted in Europe last year. The company partnered with Dallara to produce a super lightweight, aerodynamic version of the Huracán road car’s body. The naturally-aspirated 5.2 liter V-10 is the same engine as in the road car, only race tuned and unmuffled by noise-dampening, producing about 550-horsepower—serious mojo in a car that weighs in at about 2,730 pounds. Everything else has been reengineered from the road car, from the steering wheel to the brakes to the six-speed paddle-shifted gearbox.

In its first race, the car won a 3-hour jaunt at Monza a year ago. Then it made its North American debut at Daytona’s Rolex 24 this January. Five Lambos ran, the top finisher claiming 24th position, 10 spots behind the winning GTD class car, an Audi R8 LMS GT3. Unlike Ferrari, Lambo has named a price for its GT3 car, when the company debuted it last year: about $418,000.

It’s twin-turbo versus naturally aspirated, V12 versus V-10, Maranello versus Sant’Agata Bolognese, Enzo versus Ferruccio. So far in their short histories in North America, the 488 GT3 tops the Huracán GT3 in race finishes. In Europe, the two compete head to head in the Blancpain GT Series, where a Ferrari 488 placed 5th in a recent race at Monza, three spots ahead of the top Lambo. The Ferrari also beats the Lambo, for our money, in the looks department and in the engine’s song. But that’s just us. Tell us what you think.

Plus, a Corvette shooting brake and good, old-fashioned Levis.