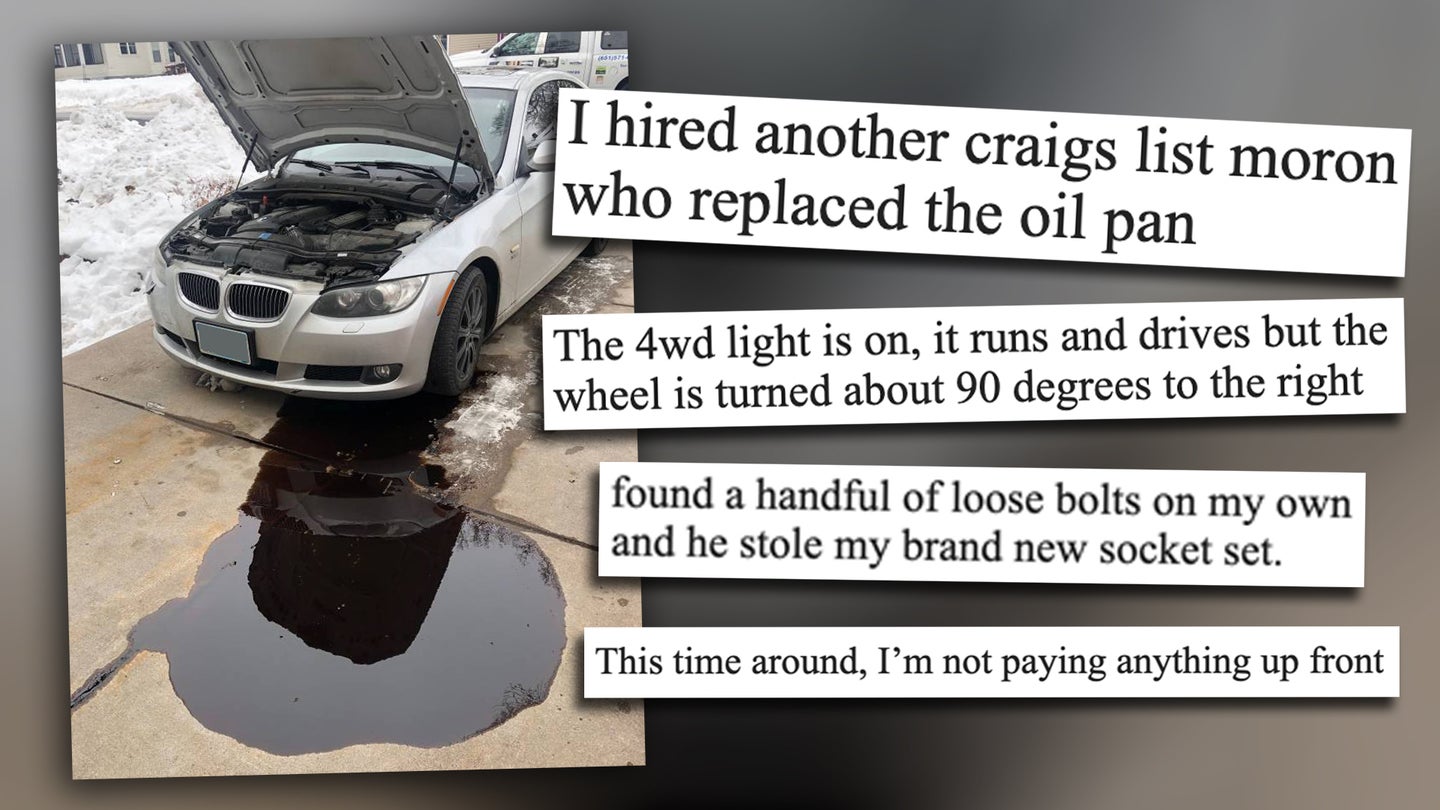 Used German cars are notoriously expensive to service, especially when things go wrong and the pros have to get involved. Any frugal-minded owner worth their salt knows how to seek out a reputable independent mechanic if they can't take care of a problem themselves—but sometimes even that price is too high, sending desperate drivers into the great unknown of the Craigslist barter section seeking cheap labor for a used stereo, or something. What happens when that goes wrong? Internet gold.

Earlier this week, a post appeared on the Minneapolis Craigslist barter section written by a pissed-off man asking for help to repair his 2010 BMW 3 Series sedan. He cuts right to the chase about the original issue. "My wife hit a boulder in the road and it cracked the oil pan. She drove it home (it ran and drove just fine), when she got home it leaked all the oil out." This is accompanied by a jarring photo of the car with its 5W 30 lifeblood draining away on his driveway, like something from a murder scene. But a simple enough problem on the surface: Just replace the oil pan, refill with oil, and you're (probably) good to go.

Of course, there's a twist. Turns out our intrepid barterer had already sought assistance this way, hiring another "craigs list moron [sic]" who ended up breaking a lot more of the car and allegedly stealing a new socket set. How bad did it get? Here's his note in full, screengrabbed for posterity and reproduced in text below:

"My wife hit a boulder in the road and it cracked the oil pan. She drove it home (it ran and drove just fine), when she got home it leaked all the oil out.

I hired another craigs list moron who replaced the oil pan, but didn’t put everything back together correctly. The 4wd light is on, it runs and drives but the wheel is turned about 90 degrees to the right and it sounds funny when driving so it has only been driven around the block. I paid this idiot in full and found a handful of loose bolts on my own and he stole my brand new socket set.

This time around, I’m not paying anything up front, and not paying for crappy work. You can come look at it and give a quote, or if you have a shop I may be able to bring it to you if I can find a trailer.

Email experience, availability and what kind of money you think you would need. It could be something stupid or could need a complete redo I have no clue. I have cash, or can trade audio video cctv or security items, 2nd amend, or ?"

Replacing the oil pan on an E90-series BMW isn't an undemanding task. As the owner of one, I dread the day I start to see a pool of oil under the front end of my car. It requires supporting the engine from the top of the bay, dropping the sub frame, and (on an xDrive-equipped car) even removing the front axles. You can read up on the process if you're feeling technical.

So really, it's not a complete surprise to hear that a would-be mechanic trading his services on Craigslist managed to mess up the car's steering and all-wheel drive system in attempting what sounds like a straightforward job.

Even from a DIY-sense, one might be looking at around $900 in OEM parts to mend the car. Add in labor for a complex job like this and you might quickly end up with a $1,500-$2,000 invoice from your local shop. It starts to make sense why this owner sought out unofficial some help, especially given how things are in the world right now. There's nothing inherently wrong with finding a mechanic on the Cragislist barter section. We wouldn't pay them in full up front, though—and it should be noted that no decent shop would ask you to do this, either.

Hard Luck Automotive provides oil changes and even transmission replacements for just the cost of parts.

The truck’s former owner may have lost the battle with cancer, but his 2006 Titan is still helping people through his foundation, thanks to Nissan.

Some call this man the “MacGyver of Mission Viejo.”