Let their respective drivers explain the differences between these $500k and $1-million Acura racers. 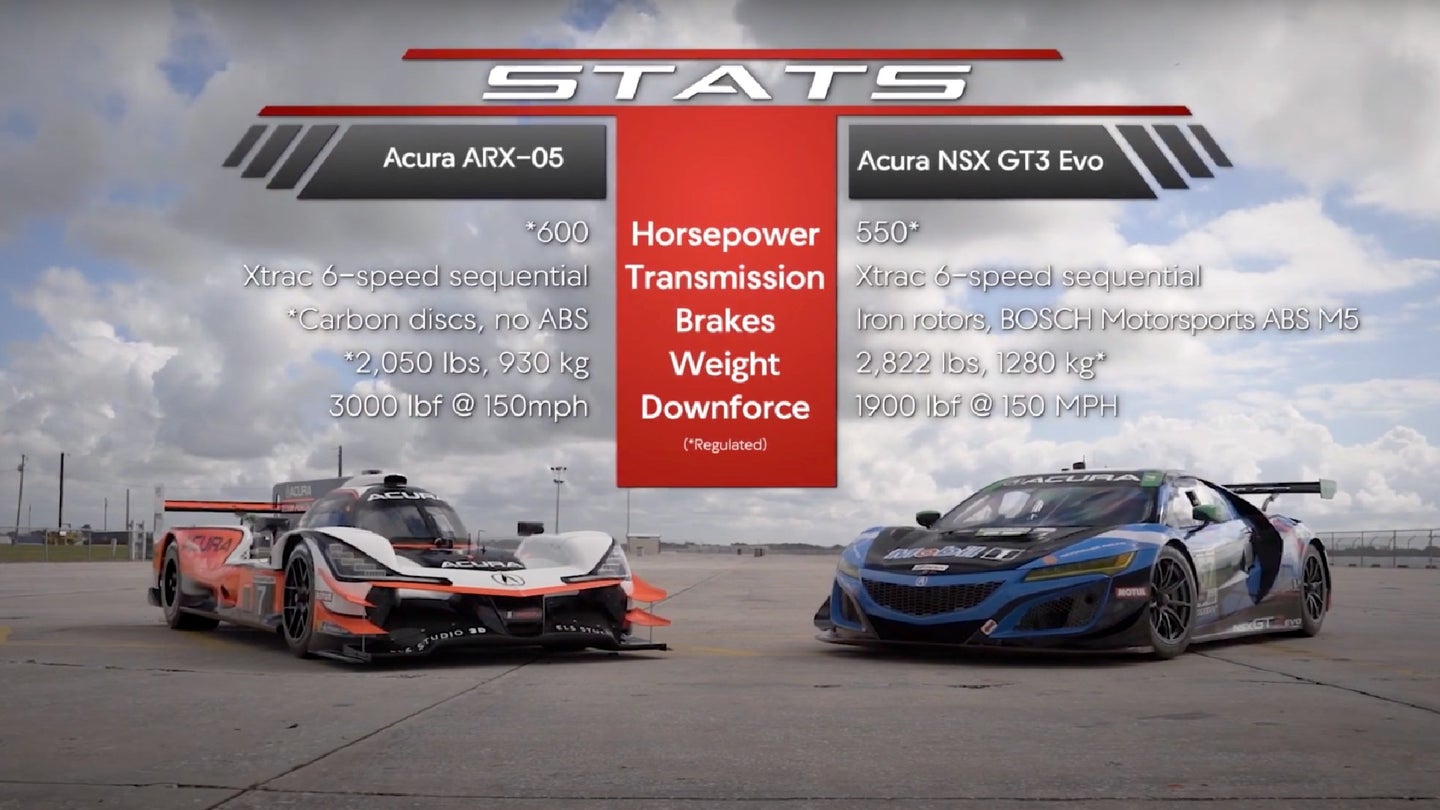 Acura's reputation in sportscar racing speaks for itself with multiple championships across various series, its most recent being a double-title 2019 IMSA season. With Roger Penske heading the team's charge at IMSA's top level, the Acura ARX-05 nabbed its maiden championship while its sister model, the Acura NSX GT3, won the GT Daytona class title. These two cars couldn't be more different, though—and that's something pro drivers Ricky Taylor and Trent Hindman can attest to.

Taylor drives the No. 7 ARX-05 Daytona Prototype international for Acura Team Penske, while Hindman was a member of the race-winning No. 86 NSX crew. They each have hundreds of hours behind the wheel in their respective racers, though neither had dabbled in the others' car until this February at Sebring International Raceway. It was then that Acura organized a driver swap for the two pros, showing just how unique each purpose-built machine is.

For starters, Hindman hopped into the ARX-05 DPi. The prototype is manufactured to race in one class and one class only, with proven drivers including Taylor, Juan Pablo Montoya, and Helio Castroneves usually handling the reins. It makes roughly 600 horsepower from a mid-mounted, twin-turbo, 3.5-liter V6. Power is channeled through a six-speed Xtrac sequential gearbox and then sent to the rear wheels, where it propels the car to speeds upwards of 180 miles per hour on IMSA's fastest tracks.

Perhaps the most significant advantage the ARX-05 has over the NSX is downforce. At 150 mph, it produces 3,000 pounds compared to the NSX GTD car's 1,900 pounds. While the latter is certainly respectable for a production-based car, it can't hold a candle to the racing-only prototype. Factor in the ARX-05's touchy carbon brakes and the feel is completely different, as Hindman notes.

Transferring to Taylor and the NSX, the differences are clear. Rather than the single-seater he's accustomed to, Taylor is now positioned far to the left of the cockpit. Not only that, but the GTD racer shares more DNA with its road car counterpart via features like anti-lock brakes, so there are definitely adjustments that need to be made.

The NSX requires far more brake pressure to clamp down on the iron rotors, though the feedback is improved according to Taylor. Power is still impressive thanks to the 550-horsepower, mid-mounted V6 that also boasts twin turbos but drops the hybrid system from the production NSX variant. In all, the NSX hits speeds closer to 160 mph on the banks of Daytona.

Downforce, as we talked about before, is lower so the car is less planted and more accepting to throttle modulation. Since the NSX GT3 is built for both pros and amateur racers, it's meant to be more forgiving and it achieves that goal, from the sounds of it.

No matter how you shake it, both cars are massively quick and would impress anyone on the other side of the track's SAFER barriers. It's interesting to hear the pair of wheelmen's takes on the others' respective office, and one day, we'll be able to watch them in person again rather than strictly online.