The Oddball Tatra T87 Was Europe's Most Genius Prewar Car, And Great at Killing Nazis

It featured an air-cooled V8 with a magnesium block and hemi heads, among other wacky engineering feats. 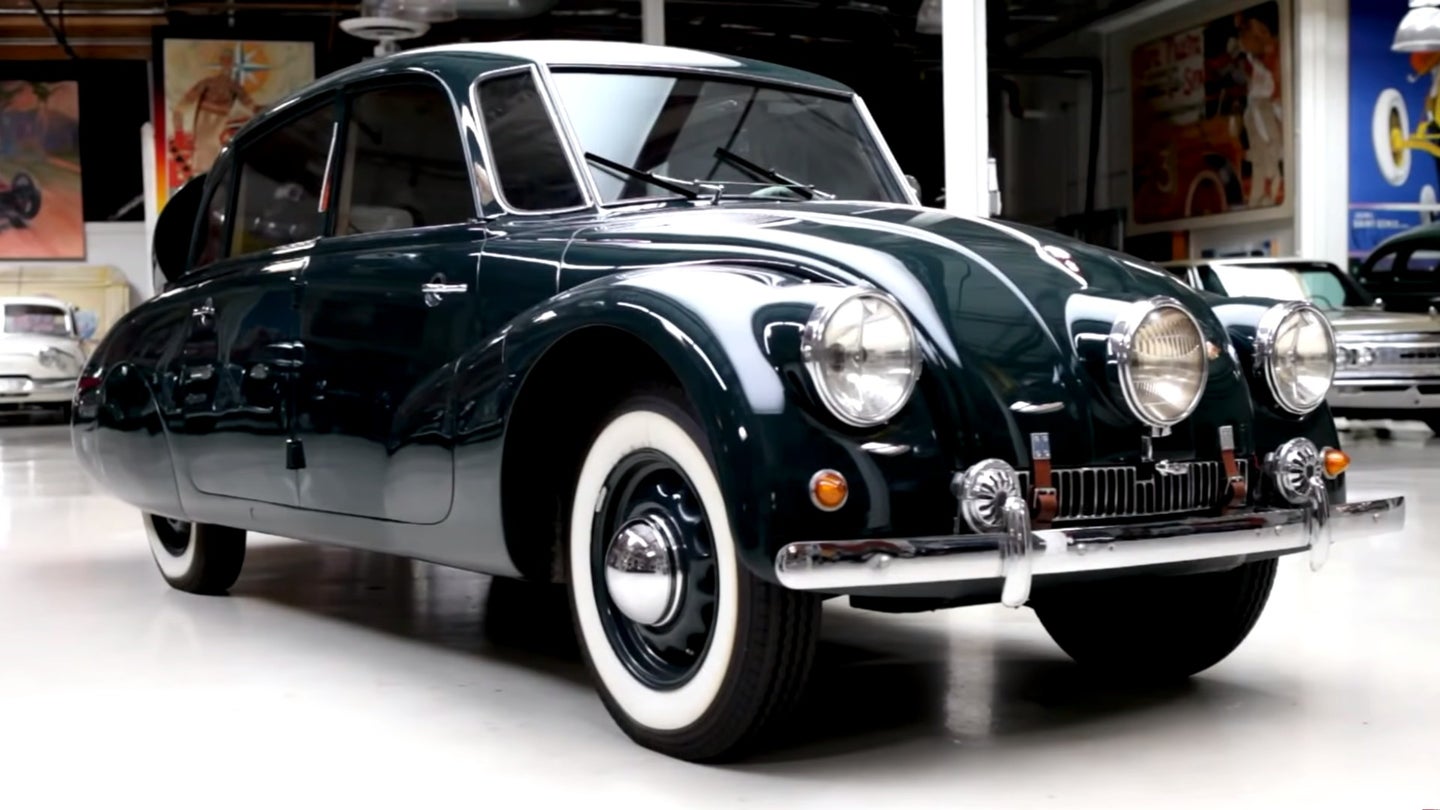 Despite the now countless articles on them being just a search away, Tatras remain on the mysterious side. Most people never get to see one in the metal, and without careful examination, who could guess that these Czech pioneers of 1930s engineering created not only a rear-mounted overhead-cam V8, but an air-cooled 2.9-liter at that? With a cast magnesium block and hemispherical combustion chambers, no less.

Of course, most Tatra stories revolve around the T87s' "Nazi Killer" pedigree, in which seven German commanders died in confiscated Tatras going too fast around sharp curves. Yet there's a lot more to these aerodynamic marvels than tricking bad people who were simply more used to driving a front-engine Mercedes-Benz through fast corners.

Austrian engineer Hans Ledwinka's first aerodynamic, V8-powered Tatra sedan was 1934's T77, and it was co-designed by Paul Jaray, creator of the Zeppelin and Hindenburg-class airships. The later T87 was an evolution of the concept with a drag coefficient of 0.36, confirmed by Volkswagen's wind tunnel. The five-seater Tatra 87 was a luxury car by all means, capable of returning up to 20 miles per gallon while maintaining an average of 60 mph. Using a four-speed manual, its top speed was nearly 100 mph, partly thanks to a completely flat undercarriage and that unique central stabilizer fin at the rear.

In the name of stability, with a pair of spare tires, tools, fuel tank, the reservoir of the central lubricator system and a large oil cooler at the front, 38 percent of the T87's weight rests over its front axle. At the rear, the Tatra also features the 1936 manual equivalent of Lamborghini's cooling slots introduced for 2020. And with those doing their jobs, this air-cooled, overhead-cam, hemi V8 is known for working flawlessly in any weather. This is evidenced by Hanzelka's and Zikmund's adventures through Africa and Latin America after the Second World War, during which they crossed 44 countries driving their Tatra 87.

Of course, Jay Leno has one of his own. Utilizing a Weber carburetor instead of the factory Solex, his Tatra 87 produces 85 horses, in a body featuring three headlights, suicide doors at the front, dual horns on the bumper, the largest sunroof one could ask for, a complicated split windshield design and a cabin filled with posh leathers and wood for the most comfortable ride on any side of the Tatra mountains.

A light and sleek car on a unique Y-frame, the Tatra 87 is the ultimate in pre-war European design. Until 1950, the Czech built 3,056 units. However, we must remember that the Nazis managed to wreck a few.

If you happen to be in Nashville, Tennessee, the Lane Motor Museum has 13 Tatras on display, including a T87.