The 1932 Ford McMullen Roadster became an icon when it appeared on the cover of Hot Rod Magazine in 1963. 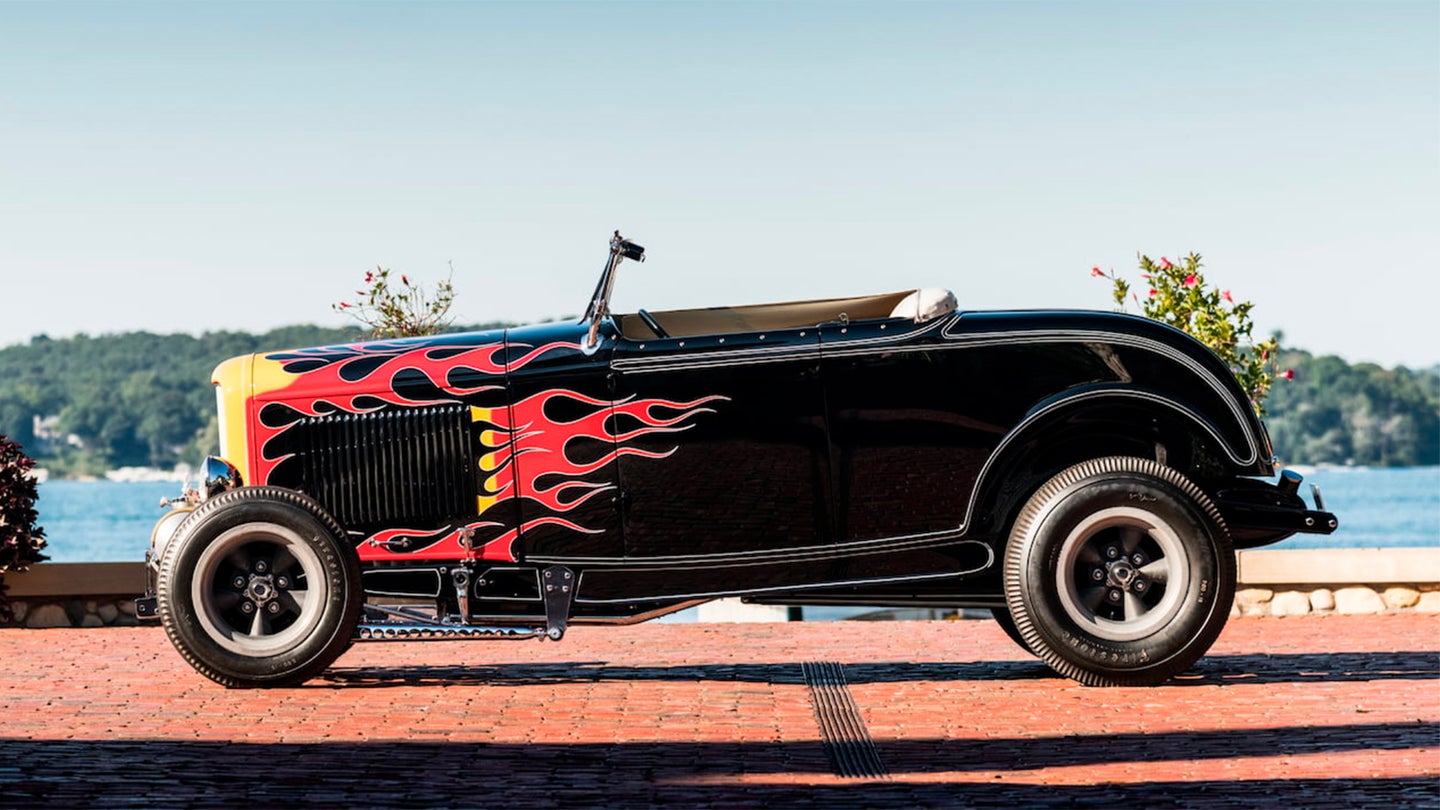 Some cars are classics the moment they roll off the production line. Others have to gradually age their way into hindsight to start charging the nostalgia tax. Then you have rare cases where something becomes an icon an entire community—cars like the 1932 Ford Model A that become the standard image conjured up when we hear the phrase "hot rod." But every trend has an origin, and the flame-sided 1932 Ford McMullen Roadster is the one that started it all. Next weekend, someone will have the opportunity to buy it at Mecum Indy 2020 beginning on July 10th.

Tom McMullen originally purchased the car in 1958 with a 283 cubic inch V8 that he immediately swapped with a bored 352ci Chevy V8 with a six-barrel carburetor set up. As the unwritten rule of hot-rodding more is never enough and soon McMullen added a GMC 4:71 supercharger with dual four-barrel carbs and Moon Eyes aluminum fuel tank. Ed "Big Daddy" Roth dressed the car with a flame job with pin-striping done by McMullen himself.

In 1963, the cover of Hot Rod magazine featured a photo of this chopped, dropped, 1932 Ford roadster with flames on the side, souped V8, and aluminum fuel tank up front created a Marilyn Monroe in a white dress moment in automotive history. It became the textbook example of what a hot rod, in particular a '32 Ford, is supposed to be.

McMullen daily drove this car and enjoyed pushing it to its limits. In 1964, he entered the Deuce in speed trials at El Mirage and ran a top speed of 167 miles per hour, earning the title of the fastest street rod. McMullen continuously tinkered with this car while using it as his daily-driver throughout the 1960s while appearing magazine and record album covers. But after a decade in the spotlight, he sold it in 1970 for a mere $5,000.

At the time, he needed the money for his business, and that year was the peak of the horsepower wars with Detroit cranking out factory big-block hot rods that made the '32 Roadster tired by comparison. McMullen stated in past interviews that selling this car was one of his biggest mistakes in life.

McMullen died in a tragic plane crash in 1995, but his legacy lives on with this car, a car that took third in its class at the 2007 Pebble Beach Concours d'Elegance and has been called "the most identifiable hot rod of all time" by Brian Breannan, editor-in-chief of Street Rodder magazine. The McMullen Roadster went through a complete restoration in the early 2000s back to its 1963 condition. Ed Roth's flame job was digitally scanned to reproduce an exact copy since the flames are different lengths on each side.

The McMullen Roadster will be for sale at Mecum Indy 2020 next weekend starting July 10th. The car will be part of the Mecum Gallery Exposition, a new sales platform allowing "investment-grade" vehicles to be purchased directly. That means the McMullen will not be rolling across the auction block; last year, it failed to meet reserve at Mecum Kissimmee 2019 with a high bid of $700,000. Selling the car through Mecum's Gallery Exposition avoids the risk of that happening again.